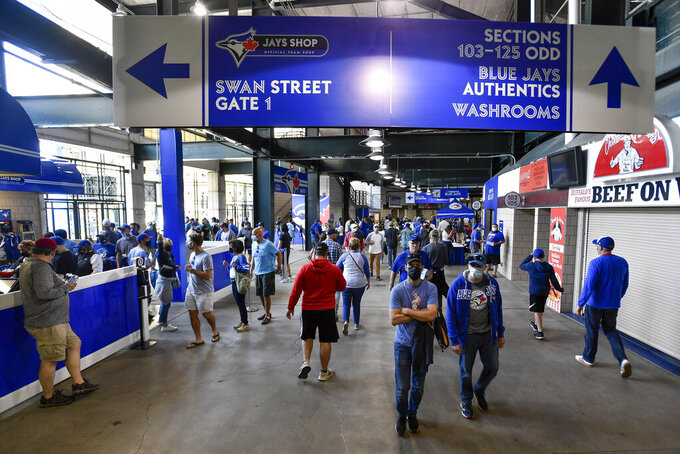 Fans walk along the concourse of Sahlen Field before a baseball game between the Toronto Blue Jays and the Miami Marlins in Buffalo, N.Y., Tuesday, June 1, 2021. (AP Photo/Adrian Kraus)

BUFFALO, N.Y. (AP) — It may not have been Toronto, but Buffalo felt much closer to home.

Though still playing the role of big league nomads, Vladimir Guerrero Jr. and the Blue Jays welcomed the opportunity to finally have a crowd pulling for the actual “home” team in celebrating their return to western New York.

A win at Sahlen Field on Tuesday night felt pretty sweet, too.

Guerrero keyed a career-best four-hit outing with his majors-leading 17th home run and the Blue Jays beat the Miami Marlins 5-1.

“The support of the fans here in Buffalo was great,” Guerrero said. “We really needed that. It felt like were playing home in Toronto. It was great, great for me, for the rest of my teammates.”

Manager Charlie Montoyo was wowed from the moment he caught a glimpse of a mostly blue-and-white wearing crowd of over 5,300 in the stands.

“To have fans pulling for us for the first time in two years at the ballpark, it was great,” Montoyo said. "And all the players felt it, too. It was pretty cool.”

Not having played a game in Toronto since closing the 2019 season with an 8-3 win over Tampa Bay, the Blue Jays have spent the past year and a half playing on the road because of Canadian health restrictions due to COVID-19.

Their so-called “home” games have either featured empty stands, as happened last year in Buffalo, or in front of indifferent fans, which was the case in opening the season 10-11 playing at their spring training site in Dunedin, Florida. The Blue Jays escaped the heat and humidity to return to their Triple-A site in Buffalo, where they went 17-9 last year and clinched their first playoff berth since 2016.

Robbie Ray (3-2) allowed one run on six hits through six innings, and the Blue Jays picked up where they left off a year ago in their adopted home.

Guerrero doubled in the first, hit a three-run homer in the third and added two singles. Lourdes Gurriel Jr. had three hits, including a towering solo home run.

The game ended with reliever Jordan Romano striking out pinch-hitter Jose Devers on a 3-2 count with the bases loaded. The Marlins lost their fourth straight.

Marlins shortstop Jazz Chisholm went 0 for 4, including striking out twice, and had an error in returning after missing four games with a sore right ankle.

“You want to throw a perfect pitch. I just missed a little bit, hung my slider,” Alcantara said of Guerrero's homer. “He won the fight. I tried to get an out, maybe a strikeout. But he swing the bat pretty well today."

The teams close their two-game series on Wednesday night.

Guerrero's homer came after singles by Marcus Semien and Bo Bichette for a 3-0 lead.

Starling Marte hit a double in the Miami fifth that drove in Luis Marte, who made his major league debut.

On his next time up following his home run, Guerrero was greeted with a chant of “MVP!” in the familiar confines of a stadium where he gained fans during a brief minor league stint before being promoted to Toronto.

This was the type of home-field advantage the Blue Jays felt they lacked in Dunedin. In Buffalo, many are familiar with the young core of Toronto’s roster, which spent time developing with the Triple-A Buffalo Bisons.

Erik Johnson, among the many fans wearing Guerrero shirts and jerseys, lucked out by landing last-minute tickets 13 rows behind home plate.

Before the pandemic, Johnson wanted to celebrate his son’s first birthday by taking him to a game in Toronto. A year later, he had son Wesley on his lap with a prime view of Guerrero’s blast.

“That was amazing. I mean, just straight out,” Johnson said of the hit. “This is incredible. When we heard the Blue Jays were in Buffalo, we knew we had to fin da way to get to the game.”

Marlins: OF Lewis Brinson (left middle finger) and RHP Elieser Hernandez (right biceps) are with the Marlins in Buffalo but are not on the active roster at this time. Hernandez, on the 60-day IL retroactive to April 4, can be activated as early as Thursday. ... RHP Sixto Sanchez experienced slight discomfort in his throwing shoulder in between bullpen sessions last week. He is going to stop throwing for a few days before being re-evaluated. Sanchez has not thrown in a game this season and has been rehabbing since first experiencing right shoulder discomfort in a simulated game at the team’s alternate training site on April 1. ... INF Miguel Rojas (dislocated left index finger) had X-rays, which revealed a small avulsion fracture from his finger dislocation. Rojas, however, has started range of motion activities. ... RHP Jordan Holloway (right groin strain) threw a 20-pitch bullpen on Sunday and is scheduled for another bullpen later this week. ... RHP Jorge Guzman (right elbow inflammation) threw a 20-pitch live batting practice session on Saturday.

Blue Jays: RF George Springer (oblique) caught a few flyballs and ran the bases, but there is no timetable on when he’ll be cleared to return.

Marlins: RHP Pablo López (1-3, 2.71 ERA) is coming off back-to-back seven-inning four-hit outings -- both no decisions -- in attempting to win his second straight after opening the season with three losses.

Blue Jays: Rookie RHP Alex Manoah preps to make his second career start after a sparkling major league debut in which he allowed no runs on two hits over six innings in a 2-0 win at the New York Yankees on Thursday. The 6-foot-6, 285-pound, 2019 first-round draft pick struck out seven and walked just two in an 88-pitch outing.