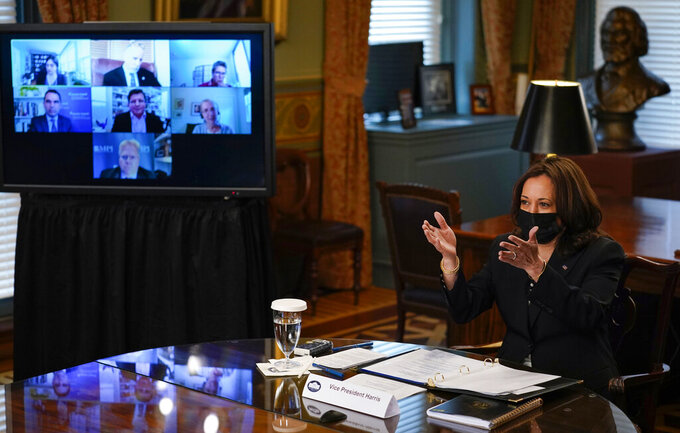 WASHINGTON (AP) — Vice President Kamala Harris is planning a trip to Mexico and Guatemala as she leads the White House’s diplomatic efforts to tackle the migration challenge at the U.S. southern border.

Harris told reporters Wednesday that she was “looking forward to traveling, hopefully as my first trip, to the Northern Triangle,” with stops in Mexico and Guatemala planned. She said she would go as soon as possible, depending on restrictions put in place for the pandemic.

But when asked if she would visit the border, Harris suggested she had no plans to do so, noting that Homeland Security Secretary Alejandro Mayorkas had been tasked by the president with dealing with the increase in migration there, while she was focused on dealing with the root causes of migration to the U.S.

It’s a decision that’s certain to fuel criticism from Republicans that the Biden administration isn’t doing enough to address the large increase in migration at the border. Harris and President Joe Biden both have been hammered by GOP lawmakers for not visiting the border, even as jarring photos of minors held in overcrowded detention centers drew fresh attention to the issue.

Biden has dispatched a number of top aides to evaluate the situation at the border instead.

Indeed, Republican lawmakers returning from a border trip blamed the Biden administration for the problems, arguing for a return to Trump-era policies. They said the president and vice president need to go to the border to see firsthand the migrant surge.

“He can stop this today,” said Rep. Steve Scalise, R-La., the GOP whip. “Vice President Harris needs to go down to the border and see this for herself.”

The increase in migration to the U.S. has become one of Biden’s biggest challenges in the early months of his administration.

In March, a record number of unaccompanied children attempted to cross the border, and the Border Patrol saw its largest number of encounters overall with migrants on the southern border — just under 170,000 — in two decades.

Numbers grew sharply during Trump’s final year in office but further accelerated under Biden, who quickly ended many of his predecessor’s policies, including one that made asylum-seekers wait in Mexico for court hearings in the U.S.

Harris, meanwhile, faces her own set of challenges in taking on a problem that has long eluded any easy solutions. She’s been tasked with overseeing diplomatic efforts to deal with issues spurring migration in the Northern Triangle countries of El Salvador, Guatemala and Honduras, which includes pressing them to strengthen enforcement on their borders, while also developing and implementing a long-term strategy that gets at the root causes of migration from those countries.

On Wednesday, Harris was leading a briefing with a handful of experts focused on those very issues, and she acknowledged in remarks to reporters that solving the region's problems would take time.

“We have to figure out how to assess our impact,” she said, but added, “it will not be obvious overnight.”

"The work we have to do is going to require a commitment that is continuous, that we institutionalize with our partners,” and that includes a long-term strategy in the region, Harris said.

She added: “It will take some time to see the benefits of that work, but it will be worth it.”