Hovland's mother points out mistake that leads to penalty 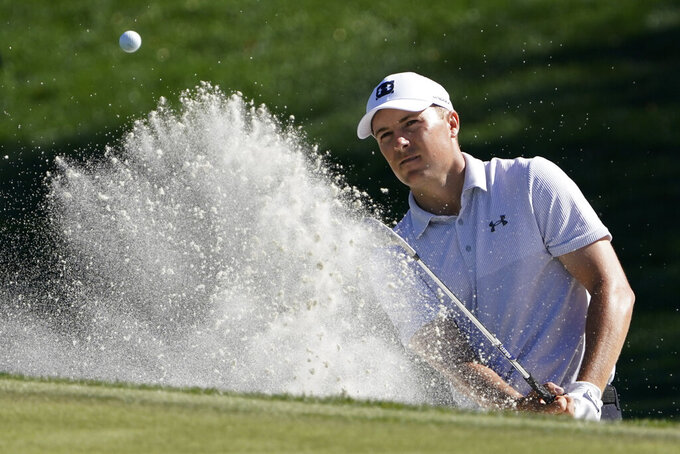 Jordan Spieth hits from the bunker on the ninth hole during the first round of the The Players Championship golf tournament Thursday, March 11, 2021, in Ponte Vedra Beach, Fla. (AP Photo/John Raoux) 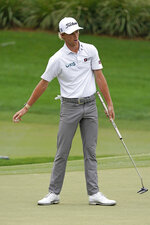 PONTE VEDRA BEACH, Fla. (AP) — Viktor Hovland wound up missing the cut at The Players Championship by two shots with a 2-over 74, and he could trace that to a two-shot penalty in the opening round for returning his marker on the 15th green in the wrong spot.

Hovland didn't realize he had done that.

Apparently his mother did.

Golf Channel reported on the broadcast Friday that Hovland's mother was watching from Norway and called to ask him after his round if was going to get penalized. Hovland had no idea what she was talking about when his mother shared what she saw. Hovland contacted the PGA Tour, video was reviewed and he was docked two shots.

“I’ve already kind of put that past me. I’m just more disappointed that I wasn’t able to play better,” Hovland said.

It was the first time in just over a year that Hovland missed the cut, dating to the Honda Classic. He had made 22 consecutive cuts on the PGA Tour, trailing Xander Schauffele (23) among active streaks.

Schauffele also missed the cut at The Players.

That leaves the longest active streak to Jon Rahm at 19. He shot a 68 on Friday and was five shots out of the lead. Rahm's last missed cut was at the Colonial when golf returned from the pandemic.

While the second round would not be completed until Saturday morning, the cut was locked in at even-par 144.

Will Zalatoris was 12th on the Korn Ferry Tour points list and No. 483 in the world when the pandemic shut down golf a year ago. He returned to competition at the TPC Sawgrass — the Dye Valley Course — and tied for sixth after holding the 54-hole lead in a Korn Ferry event.

That was the start of an amazing run.

Zalatoris ran off five straight top-five finishes, including a win. That got him into the U.S. Open, where he tied for sixth. And he returned to the TPC Sawgrass — this time on the Stadium Course — for The Players Championship.

“It's just kind of crazy to think that nine months ago I was playing over there at the Dye’s Valley Course and playing on the Korn Ferry Tour, and if you would have told me I would be playing here I would have told you you were a little crazy,” Zalatoris said after a 71 on Friday to reach 3-under 141.

“If anything it kind of puts a little bit of gratitude in it,” he said. “It's kind of cool to be here.”

Zalatoris won't have a full PGA Tour card until he wins or until the next season starts in September. But at No. 46 in the world, he will be in the Dell Match Play in two weeks. And if he stays in the top 50 after that, he'll be going to the Masters.

Denny McCarthy made is third career hole-in-one Friday, but his first in competition. He used an 8-iron on the par-3 third hole during his round of 69 that left him in the mix going into the weekend.

McCarthy had his first ace at age 22 during his fourth year at Virginia. Three months later, he made one at Chambers Bay during a practice round for the U.S. Open, but it was his second ball.

“This is really only my second hole-in-one officially, and really my first one in tournament play,” he said. “Pretty cool.”

Brendon Todd made an ace on the eighth hole with a 5-wood, his first on the PGA Tour. It was the seventh hole-in-one on No. 8 in tournament history, and the first since Michael Thompson in 2013.

Todd shot a 69 and made the cut with one shot to spare.

Jordan Spieth was in the middle of the 14th fairway when he tugged his approach into a bad lie in the bunker, blasted out through the green, chipped weakly and missed the putt. He made double bogey, ending the longest streak of his PGA Tour career — 411 holes — without a double bogey or worse. That dates to the 16th hole of the first round at the Masters.

That wasn't the only streak Friday.

Sungje Im ran off six straight birdies around the turn, tying a tournament record that had been done 10 times — first by Tom Watson in 1984, most recently by Justin Rose in 2018.

Sergio Garcia tied a record when his approach to the par-5 11th stopped inches from the hole, giving him a tap-in eagle. It was his third eagle of the week. No one has made more for an entire tournament at Sawgrass.