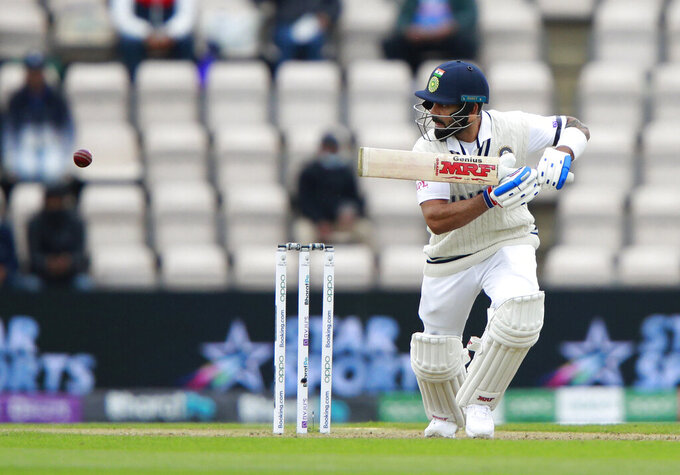 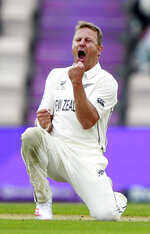 India grounded out 146-3 in 64.4 overs before the second day's enthralling play was cut short by bad light after tea with 33.2 overs remaining. The Rose Bowl floodlights were on for most of the day.

The first day on Friday was washed out, and more rain is forecast on days three and four. But the final got underway after New Zealand won the toss and backed its strength by leaving out spinner Ajaz Patel and plumping for an all-pace attack plus seam-bowling allrounder Colin de Grandhomme.

The decision looked good for the overcast conditions and slow outfield, but it was the India batsmen who started off with far more authority despite spending most of their buildup in quarantine and missing a warmup match.

Shubman Gill and Rohit Sharma combined for 62 until the depth of New Zealand’s attack, tuned up by dominating England in two tests, came through when Kyle Jamieson and Neil Wagner took them out late in the first session.

Cheteshwar Pujara took 36 balls to get off the mark and was trapped by Trent Boult on 8 at 88-3, but captain Virat Kohli and Ajinkya Rahane led India to tea and through the 11 overs afterwards.

“They were challenging conditions when we started,” India batting coach Vikram Rathour said. “We lost the toss and it was overcast all day, so credit to all the batters. They showed a lot of restraint and a lot of discipline. We handled it pretty well.”

The concentration of Sharma, 34 runs, and Gill, 28, prevailed against the first-hour swing of Tim Southee and Boult, but they fell in the space of one run in an eventful last half-hour before lunch.

Sharma played two elegant backfoot cover-driven boundaries against de Grandhomme, but Jamieson induced a thick outside edge as Southee made a low two-hand catch at the third slip for the breakthrough. Jamieson finished with figures of 14-9-14-1.

Wagner lived up to his reputation of picking up wickets early as the left-arm swing bowler found the outside edge of Gill’s bat in his first over to give the Black Caps double delight in the first session at 63-2.

Pujara met lively swing bowling by all five seamers, and taking 36 balls to score his first run was his second longest wait for a first run in a test, after taking 54 balls in 2018 in Johannesburg.

Boult bagged Pujara with an inswinger and looked to have Kohli in the same over, edging behind down the leg side on 17. Umpire Richard Illingworth referred it to the TV umpire but Kohli made no contact with the ball.

Kohli and Rahane, on his former home ground after playing for Hampshire, settled in but there was no respite from the quality swing bowling by the Black Caps. And free runs were hard to come by as well, as retiring wicketkeeper BJ Watling gave up only two leg byes.

"It's probably pretty even at the moment,” Jamieson said.

"The plan was to stick around outside off and credit to them, they played pretty well. But I think we were able to keep things relatively restricted and grabbed three important wickets as well.”

India wore black armbands in honor of the country’s celebrated sprinter, Milkha Singh, who died at age 91 late Friday because of complications from COVID-19.