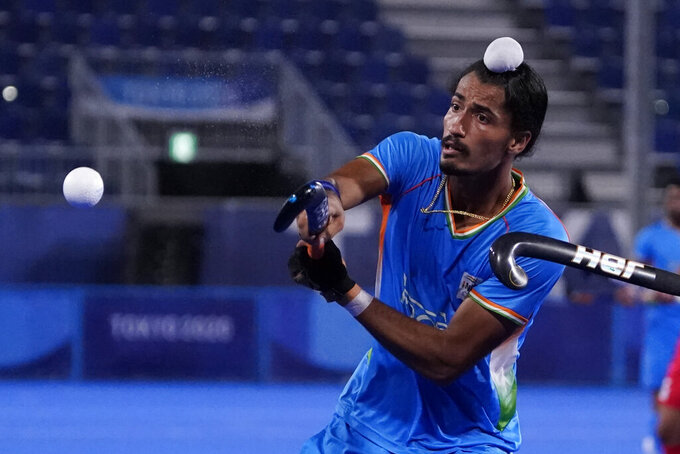 India's Dilpreet Singh (2) knocks the ball out of the air against Japan during a men's field hockey match at the 2020 Summer Olympics, Friday, July 30, 2021, in Tokyo, Japan. (AP Photo/John Locher)

TOKYO (AP) — India's men’s field hockey program could return to its past greatness.

India won seven Olympic gold medals between 1928 and 1964 — losing only in the 1960 final to claim silver. The nation won gold again in 1980, but has placed no higher than fifth since.

India defeated Japan 5-3 on Friday night to finish second in its Olympic pool with a 4-1 record. The team will face Britain on Sunday in the quarterfinals. A win would give India its best finish since those 1980 Games in Moscow.

India coach Graham Reid said the team’s performance in the medal round could have a global impact on field hockey. India is the second-most populated nation in the world, and Reid said it wouldn’t hurt the sport for its most successful Olympic nation to make some noise.

“To be really honest, I don’t think it’s only the sport in India,” Reid said. “I think world hockey would love to see India back on the top. When it was in its prime, it was the national game of the country. And so, of course, it would be lovely to see that happen again.”

In past generations, the greatest Indian players were Dhyan Chand and Balbir Singh Sr. Now, the star is Manpreet Singh, and he has India up to No. 4 in the FIH world rankings. The 2019 FIH Player of the Year controls the action from the midfield, setting his teammates up with accurate passes and making athletic defensive plays.

Reid likened him to a basketball point guard.

“Just sort of more of a central point distributor,” Reid said. “He’s the center half style that gets it from the defense, helps you transition from defense to attack. And that’s pretty much what he does very well. He keeps it simple, but then he can also create something out of the blue.”

He has talent to pass to. Harmanpreet Singh scored four goals during pool play and Rupinder Pal Singh had three to lead the way. India averaged three goals per match in pool play.

Things didn’t start so well at the Olympics. India lost its second match 7-1 to Australia.

“When you are playing against the good teams it’s all about taking your chances,” Manpreet Singh said after the loss to the Kookaburras. “Today we got chances in the first five minutes but we missed. When they got opportunities they scored the goal. So these are differences when you are playing with a good team.”

India bounced back and beat Spain 3-0 and Argentina 3-1 to clinch second place in the pool.

The squad closed out pool play in style against Japan. Gurjant Singh led the way with two goals. India led 5-2 until Japan scored in the final minute. The team took 17 shots and kept the pressure on throughout the match.

Reid likes the momentum India has created since losing to Australia.

“Good teams don’t let something like a little hiccup affect their overall performances throughout the tournament,” he said. “We focused a lot on the next thing. You know — the sort of sports psychology stuff that is bread and butter, but it’s really important that it works. It’s like, you can’t change what’s happened, but we can learn from it and change the future.”