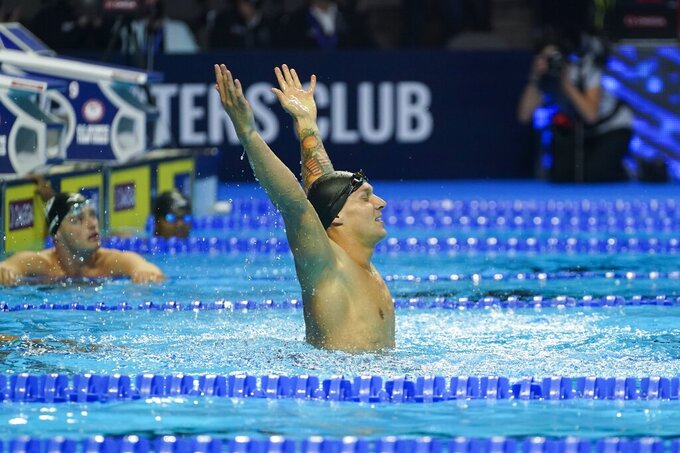 Caeleb Dressel reacts after winning the men's 50 freestyle during wave 2 of the U.S. Olympic Swim Trials, June 20, 2021, in Omaha, Neb. The next U.S. Olympic swimming team will be determined in a football stadium. USA Swimming announced Tuesday, March 29, 2022 that its trials for the 2024 Paris Games will be held at Lucas Oil Stadium, the massive home of the NFL's Indianapolis Colts. (AP Photo/Jeff Roberson, file)

The next U.S. Olympic swimming team will be decided in a football stadium.

USA Swimming announced Tuesday that its trials for the 2024 Paris Games will be held at Lucas Oil Stadium, the massive home of the NFL's Indianapolis Colts.

The decision marks the end of Omaha's long run as host of the event. The last four U.S. trials, beginning in 2008, were held in the Nebraska city's downtown arena, which seated about 14,500 after the temporary pool was installed.

USA Swimming is going for a much bigger show in Indianapolis. Local organizers have proposed a seating arrangement that would allow up to 35,000 fans — by far the largest ever for the trials.

American swimming star Ryan Murphy, a four-time Olympic gold medalist, joked about having to compete in a rival stadium of his favorite NFL team, the Jacksonville Jaguars. Murphy grew up in the Florida city and still considers it home.

“While it pains me to swim in the stadium of the Jacksonville Jaguars’ divisional rival, this will be great for the sport of swimming,” Murphy told The Associated Press. “It’s important to expose the sport of swimming to general public at all levels, especially during an Olympic year.”

Murphy has competed in the International Swimming League and also worked with the Goldfish Swim Club to expose more kids to the sport.

“I’m hopeful the 2024 Olympic trials will further the professionalization of swimming,” he said.

Three temporary pools will be set up over the field at Lucas Oil Stadium, which seats about 67,000 for Colts games. The 50-meter competition pool will be installed at one end, with a curtain dividing it from two warmup pools — one 50 meters, the other 25 meters — that will go in away from the seating bowl.

“From day one, I truly believed that there was no bigger, more exciting, everything-on-the-line Olympic event in this country than the swimming trials and envisioned the heights that we could take it to,” USA Swimming President & CEO Tim Hinchey III said in a statement. “Given their track record, we are incredibly confident and excited in Indianapolis’ ability to conduct a technically flawless competition and to stage a world-class event."

Indy's retractable-roof stadium, which opened in 2008, will add to a collection of major events that already includes the Super Bowl, the men’s basketball Final Four and this past season's college football national championship game.

The Indiana Convention Center, which is connected to the stadium, will also be used to host USA Swimming’s fan zone and hospitality area.

The exact dates for the eight-day trials have not been set but will likely be in mid- to late June, roughly a month before the Paris Olympics begin on July 26, 2024.

“The sports strategy in Indianapolis was built on a foundation of Olympic sports," said Ryan Vaughn, president of the Indiana Sports Corp. “We look forward to elevating the sport of swimming and Indy’s reputation as the city where champions are crowned through this event.”

Indy's selection will mark the 100th anniversary of the city hosting the U.S. swimming trials ahead of the 1924 Paris Olympics.

Indianapolis last held the trials in 2000. In a sign of how much the event has grown, that event was held at the 4,700-seat Indiana University Natatorium. In 2004, the trials were held for the first time in a temporary pool set up in a parking lot outside the Long Beach Convention Center in California, with more than double the seating capacity.

Omaha landed the event in 2008 and kept it for three more quadrennials. The trials generally drew sellout crowds until the 2021 competition, which was delayed a year because of the COVID-19 pandemic and allowed only partial capacity as a safety precaution.

The 2021 trials also were divided into two meets because of the pandemic, with a first wave for lower-ranked swimmers held before the main trials. There's been no word on whether the same format will be used in 2024.

Omaha made another bid for the event in 2024 but was beat out by Indianapolis. The other finalists were Minneapolis and St. Louis.

The Omaha Sports Commission congratulated Indianapolis on landing the trials and looked back on its role in expanding the popularity of swimming.

“While we are disappointed with the news this morning regarding the 2024 Olympic swim trials, we are proud of the growth the trials experienced while in Omaha,” said Lindsay Toussant, executive director of the OSC.

Toussant said the commission will “continue to strategically search for distinctive events that promote sports and continue to shine the spotlight on our city.”

Omaha is best known as the home of the College World Series, which usually overlapped for a handful of days with the swimming trials.