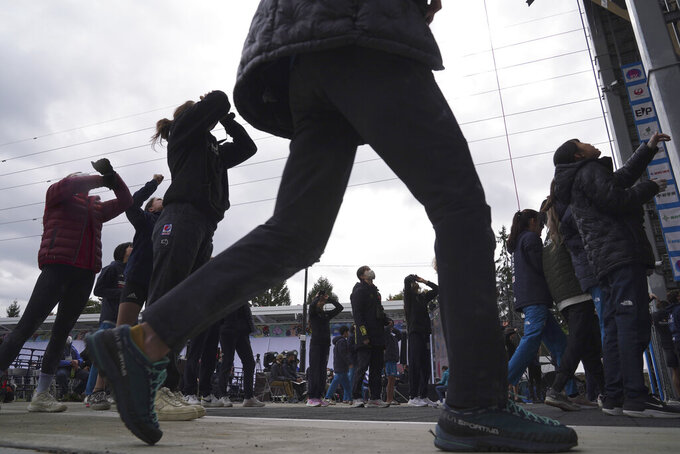 Athletes check the venue prior to the women's and men's lead semi-final of the IFSC Climbing World Cup Friday, Oct. 21, 2022, in Morioka, Iwate Prefecture, Japan. After Iranian climber Elnaz Rekabi joined a growing list of female athletes who have been targeted by their governments for defying authoritarian policies or acting out against bullying, a number of others have spoken out on their concerns of politics crossing into their sporting world. (AP Photo/Eugene Hoshiko)

MORIOKA, Japan (AP) — Days after Iranian climber Elnaz Rekabi caused an international incident by not wearing her country's mandatory headscarf while competing abroad, her fate is top of mind for the world's best climbers.

“It has made me ill — nauseous,” said American Brooke Raboutou, speaking to The Associated Press on Friday at a World Cup climbing event in northern Japan.

“I support her 100 percent and I’d like to think I can speak on behalf of most of the athletes,” she added. “I’ve reached out to her, just asking if there is anything we can do to help, to support. I know that she’s fighting a really hard battle and doing what she can to represent the women in her country.”

Raboutou said she had not received a reply.

Rekabi, 33, competed Sunday without her headscarf, or hijab, in Seoul during the finals of the International Federation of Sport Climbing’s Asia Championship. She was immediately embraced by those supporting the weekslong demonstrations in her country over the hijab that increasingly include calls for the overthrow of the country’s theocracy.

She returned home to a crowd of cheering protesters, including women not wearing the required head covering. In an emotionless interview before leaving the airport terminal, she told state television that competing without her hair covered was “unintentional.”

In an Instagram post early Saturday, Rekabi said she was “endlessly grateful for the support of you, all the people of Iran, the most decent people of the planet, athletes and non athletes, and all your supports in international community.”

“I sincerely thank all those who came to the airport for welcoming me, I love you,” she wrote. She did not address her current condition in Iran.

Sports in Iran, from soccer leagues to Rekabi’s competitive climbing, broadly operate under a series of semi-governmental organizations. Women athletes competing at home or abroad, whether playing volleyball or running track, are expected to keep their hair covered as a sign of piety. Iran makes such head coverings mandatory for women, as does Taliban-controlled Afghanistan.

Rekabi's act of what seemed to be open defiance has been described as a lightning-rod event in Iran. Activists say it lends support to the antigovernment protests sparked by the death of 22-year-old Mahsa Amini, who had been detained by the country's morality police over what she was wearing.

In the tight-knit climbing community, she's become an inspiration for many athletes who barely know her — or only know of her.

“I feel I cannot understand how it feels,” French climber Oriane Bertone said. “Athletes from that country (Iran) are obligated to wear something. I feel like this is something she did knowing perfectly that she was risking something. And that must have been really hard.

“We’re trying to be her voice because it’s not only concerning her, it’s concerning everyone in the country,” Bertone added.

Bertone was asked if she believes Rekabi is safe.

“She’s definitely not. She’s not safe right now,” Bertone said. “When we watched the (television) interview she did, she was trembling.”

Rekabi's case has drawn comparisons to that of Chinese tennis player Peng Shuai.

Peng wrote publicly a year ago about being sexually assaulted by a former high-ranking Chinese Communist Party official. She quickly disappeared from public view, tried to recant, and is reported to have come under crushing pressure as China was preparing to hold the 2022 Winter Olympics in Beijing. She is rarely seen in public and doesn't leave China, although she took part in some orchestrated events around the Olympics.

Then there's sprinter Krystsina Tsimanousksya. She criticized her Belarusian team officials, then was forced to flee to Poland during last year’s Tokyo Olympics. She feared returning home and now has Polish citizenship.

Iranian athletes did not compete at the climbing event in Japan. The field was made up of largely Europeans, Americans and Japanese. The only athletes from a Muslim-majority country were two brothers from Indonesia.

The International Federation of Sport Climbing, the government body, has echoed similar statements made by the International Olympic Committee, saying it has assurances that Rekabi “will not suffer any consequences and will continue to train and compete.”

Neither the IOC nor the climbing federation has said how it will track how Rekabi is treated in Iran.

The IOC and its President Thomas Bach have repeated similar messages in the cases of Peng and the Belarusian-Polish sprinter. Bach has been criticized for looking away from well-documented human-rights abuse in Olympic host countries like China and Russia. Both nations spent billions to host recent Winter Olympics — while other nations have backed out of bids because of high costs.

American Natalia Grossman said other climbers at the event in Japan were thinking of Rekabi, and trying to find ways to support her. She said she did not know Rekabi well and had “not talked to her too much. But everyone in the climbing community is close in one way or another.”

Grossman said she wasn't certain if Rekabi intentionally competed without the hijab. But she has her suspicions.

"I can’t know because I’m not her and I haven’t spoken to her,” Grossman said. “But every day you wear it, and you just don't forget one day.”

Like several other climbers, Grossman argued that sports and politics could not be separated — and shouldn't be.

“I don't really think you can keep them apart,” she said. “I don't think we should have to keep them apart. You should be able to make whatever statement.”

Japanese climber Miho Nonaka, who won an Olympic silver medal a year ago in Tokyo, said she was trying to understand Rekabi's plight.

“There is some physical distance, so in terms of actual support, I think the most immediate thing I can do is share it on (social media) as much as possible, or obtain the correct information and spread it to many people," she said in Japanese.

Marco Vettoretti, a spokesman for the climbing federation, described the climbers as “a young, cohesive and a diverse group.”

Vettoretti said the climbing federation expected Rekabi to be back competing in the northern hemisphere this spring.

Japanese climber Ai Mori seemed to have the same expectation, addressing her best wishes to the Iranian.

“You are not wrong," she said in Japanese. "So do your best to come back to climbing to compete again. We’ll be waiting for you.”