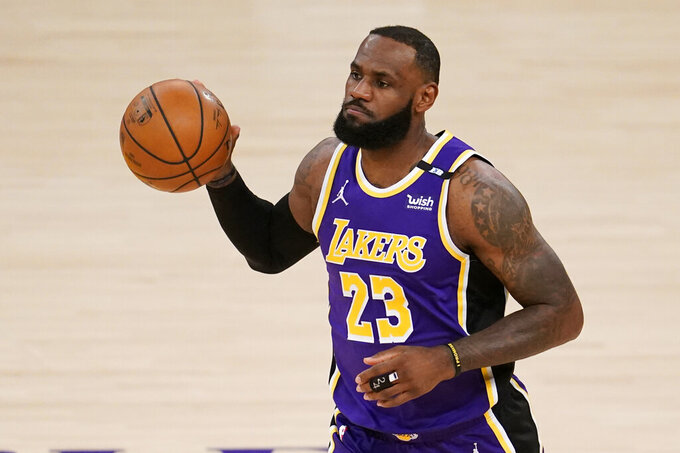 Los Angeles Lakers' LeBron James dribble the ball during the first half of the team's NBA basketball game against the Sacramento Kings on Friday, April 30, 2021, in Los Angeles. (AP Photo/Marcio Jose Sanchez)

LOS ANGELES (AP) — With LeBron James still working himself back to full strength from a sprained right ankle, the Los Angeles Lakers found out Monday they'll be without their other point guard for more than a week.

Coach Frank Vogel said James and Dennis Schröder were out for Monday's game against the Denver Nuggets. Vogel said he was sitting James in the second game of a back-to-back after the four-time MVP experienced ankle soreness during the fourth quarter of Sunday's 121-114 loss to the Toronto Raptors.

Schröder will be out much longer. He entered the league's coronavirus health and safety protocol on Sunday and will miss at least 10 days.

“They are the quarterbacks of our offense and it is a unique challenge without them. It will be more of a team-led approach,” Vogel said.

The Lakers had lost three straight and six of seven entering Monday. They have gone 8-15 since James sprained the ankle on March 14 against the Atlanta Hawks.

Vogel said James didn't suffer any setbacks and the decision to sit him was precautionary.

Schröder recently told German media that he had some reservations about getting vaccinated against the coronavirus. According to the German site Spox, Schröder said it was difficult for him because “I’m one who doesn’t like to take painkillers. I always try to get by without all that stuff.”

Vogel said the team had a series of meetings on Zoom before vaccines became available and shortly after to tell players about the benefits of getting vaccinated.

“Everyone has a different viewpoint on how they want to manage their own personal health,” he said. “There are competitive and lifestyle advantages if we reach 85%. At the end of the day, it's their own personal choice and we respect that.”

At 36-28 entering Monday in the highly competitive Western Conference, the Lakers are in danger of having to participate in the league's new play-in tournament for a spot in the main playoff draw.

After Sunday's loss, James was highly critical of the play-in tournament concept, while Anthony Davis said the defending champions had reached their lowest point of the season.

“Our team is shook right now to not have LeBron again. We understand it is going to take time for him to be 100 percent,” Vogel said. “We’re not happy where we are right now. We need everyone to rise to the challenge. That applies to Anthony as much as everyone else.”