KHL to end season, go directly to playoffs after Olympics 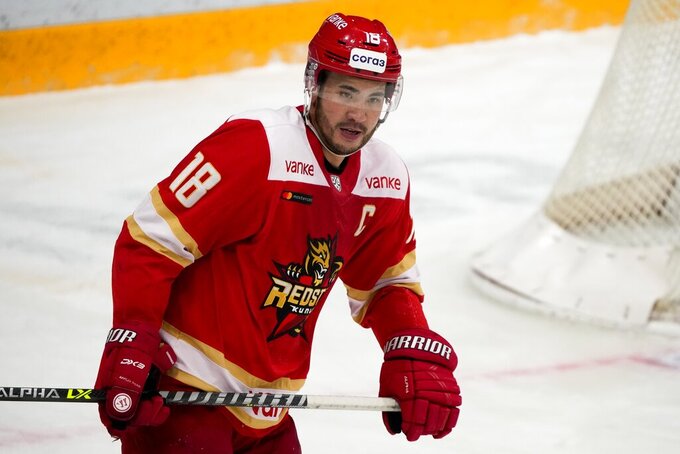 BEIJING (AP) — Kenny Agostino planned to return to Russia after the Olympics to finish the Kontinental Hockey League season.

After the KHL announced plans to call off the rest of the regular season and go directly to the playoffs, the American forward might be flying back there just to pack up his things because his team did not make the cut.

The KHL cited coronavirus concerns stemming from players at the Olympics as the reason for prematurely cutting the season short and beginning the playoffs March 1 after a weeklong break. The change is contingent on approval from the board of directors and Russian Hockey Federation.

“Very unfortunate circumstances and obviously pretty frustrating,” said Agostino, who along with U.S. Olympic teammate Andy Miele had been playing for Torpedo, which just missed out on the postseason. “But it just brings all of our focus and attention to this tournament.”

Roughly 120 KHL players are expected to compete in Beijing, making up 40% of team rosters. KHL President Alexei Morozov said “the ongoing pandemic and the risk of infection for players as they fly to different cities” for games was one of the reasons for the move.

“They’re adjusting on the fly, I think, like everybody,” said Canada's Jason Demers, who plays for playoff-bound Ak Bars. “There’s not much we can do as players but just kind of adapt to the situation.”

Morozov said players would quarantine with their team before the start of the first round. That would mean Olympians going from one bubble to another.

“Hopefully it’s not too serious and we can kind of get back and get going because we’ve been in a bubble here,” said Canada forward Jordan Weal, who is teammates with Demers and U.S. defenseman Steven Kampfer in Kazan. “It’s not like we’re around the public and possibly picking it up. We’re in one of the most secure bubbles in the world right now, and hopefully we can go back to the KHL and get right back with the team.”

The top eight teams by points percentage in each conference qualify for the playoffs under the KHL's plan. That means China-owned Kunlun Red Star, which served as a proxy for China's national team, are among the teams whose seasons are over.

“It’s unfortunate,” said veteran forward Brandon Yip, who is playing for China and was Kunlun's captain this season. “We love playing in the KHL. But that’s the times we live in right now, and if they think that’s the best decision for us, then we’ll abide by those rules. That’s obviously looking far ahead for us. We’re focused on the Olympics here.”

The rosters for China and Russia are composed entirely of KHL players. The U.S. has five and Canada nine players in the KHL, and most learned the news online.

“We had an idea it was going to happen, and we saw it on social media,” Miele said. “Me and Kenny were talking about it today. We were upset, obviously, but it is what it is and it’s crazy times right now.”

The levels of disappointment vary, but players at the Olympics seem largely understanding of the KHL's decision.