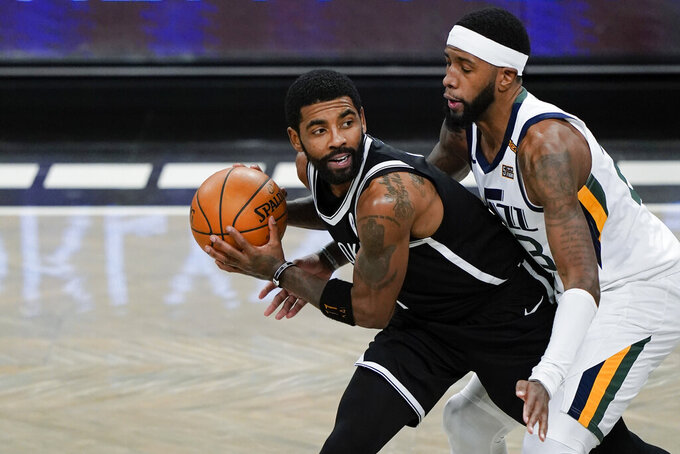 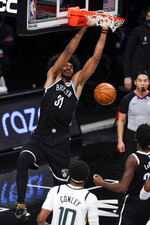 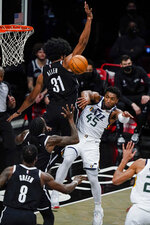 NEW YORK (AP) — Kyrie Irving scored 20 of his 29 points in the first half to lead the undermanned Brooklyn Nets to a 130-96 win over the Utah Jazz on Tuesday night.

Irving was a prime factor in the Nets’ first-half attack, scoring 18 points in the first quarter and 20 by halftime. Irving’s 18 first-quarter points were the third-most scored by an player on any team in an opening quarter this season. His 20 first-half points marked the fifth time this season he had that many in an opening half.

As brilliant as he was individually, Irving had help from Jarrett Allen and Caris LeVert.

Allen recorded his third double-double of the season with 19 points and 18 rebounds.

Allen credited a change of his pregame meal from pasta with pesto sauce to pasta with alfredo sauce for his season high in points and rebounds.

“I think that was the thing that turned my game on tonight,” Allen said with a grin.

The Nets did not let up in the second half as they cruised to their fourth win in eight games this season. A sequence in the final 1:34 of the third quarter all but put the game away. It began with an Allen alley-oop dunk off a feed by LeVert, followed by a jumper by LeVert, a breakaway layup for the Nets’ sixth man, and Brooklyn’s young big man buzzer-beating putback. In that stretch, Brooklyn extended its lead from 92-70 to 98-73.

Donovan Mitchell led Utah (4-3) with game-high 31 points. Jordan Clarkson added 12, and Rudy Gobert and Royce O’Neale had 10 each for the Jazz, whose two-game winning steak was snapped.

“We didn’t come out ready for their pressure,” Mitchell said. “We just didn’t do much right. ... We have to figure out who we want to be.”

Tuesday night’s game was the first of four for Brooklyn this week — the Nets host Philadelphia on Thursday and Oklahoma City on Sunday, and travel to Memphis on Friday. Before the game, first-year coach Steve Nash said “the length of the quarantine is kind of a moving target.” Nash did add that he didn’t think Durant would be able to participate in “on-court activity” this week.

Durant, who was replaced in the starting lineup by Taurean Prince, is averaging 28.2 points, which leads the Nets and ranks fifth in the NBA. He is also averaging seven rebounds and 4.8 assists, and had played in six of Brooklyn’s first seven games prior to Tuesday night after missing all of 2019-20 recuperating from a ruptured right Achilles tendon.

JAZZ: In light of a report from ESPN which said seven seven members of the Los Angeles Clippers’ support staff are quarantining due to a positive COVID-19 test following the Jazz’ 106-100 win on New Year’s Day, Utah coach Quin Snyder expects outbreaks of the virus will challenge all of the league’s teams.

“We’ve gone through similar things and I’m sure everybody will at some point this this season,” Snyder said. “Everybody’s in the same boat.”