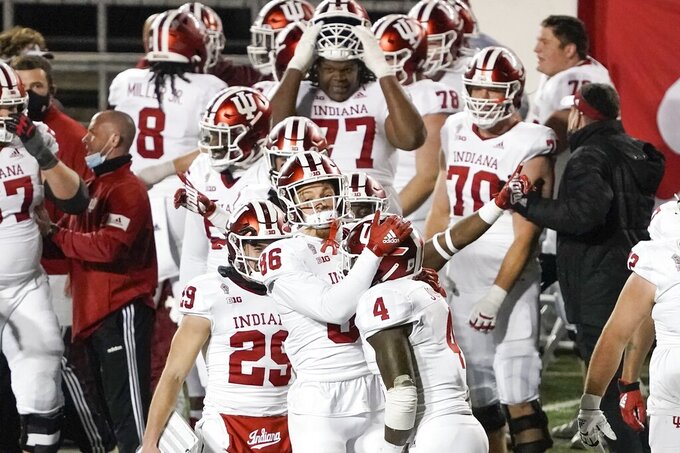 Thanks to a variance granted by state of Ohio, Cincinnati has upped its crowd capacity to 5,831 for Saturday’s American Athletic Conference championship against Tulsa.

Previously, the school said only 1,500 would be allowed at the game because of state limits imposed by COVID-19 concerns. But the state reconsidered and on Tuesday told Cincinnati that it could have more. The number is 17.9% of Nippert Stadium’s usual capacity of 33,000.

The school said it brought the capacity in line with what’s being allowed for Cleveland Browns and Cincinnati Bengals games.

The No. 17 Ohio State women’s basketball team canceled Saturday’s game against Iowa because of a spike in positive COVID-19 tests in the Buckeyes program.

The program paused also activities on Tuesday. Ohio State said the aim is to reschedule the game.

The status of Ohio’s State road game against Maryland on Dec. 23 is still to be determined.

Saint Louis and North Carolina State have agreed to meet Thursday in St. Louis as part of a two-game men’s basketball series.

The schools announced the late addition to the schedule Tuesday. The two-game set includes the Billikens returning the home game by visiting the Wolfpack during the 2022-23 season.

Saint Louis had been seeking a nonconference game, particularly after Saturday’s matchup with Evansville was canceled amid coronavirus issues within the Purple Aces program.

This will be the Wolfpack’s first game in two weeks. N.C. State last played Dec. 3 by beating Massachusetts-Lowell in “Bubbleville” in Uncasville, Connecticut, but a game two days later against Connecticut was canceled due to a positive COVID-19 test within the Wolfpack’s program.

That was one of four straight games to be canceled or postponed for the Wolfpack. N.C. State was set to play its Atlantic Coast Conference opener at No. 23 Louisville on Wednesday, but that game was postponed amid coronavirus issues within the Cardinals program.

The school says the game is off out of “an abundance of caution” based on COVID-19 protocols within the Beach’s program.

It’s the second time the game has been postponed. The teams were originally scheduled to play at Pauley Pavilion on Nov. 30, but that game was called off for the same reason.

The Beach didn’t open its season until Dec. 4 and six of its seven games scheduled this month are road games.

The Beach will leave the state of California just once this season, traveling to Hawaii in February for back-to-back Big West games.

UNLV’s men’s basketball program Is pausing in-person team activities due to a confirmed case of COVID-19.

The Runnin’ Rebels’ games against Wyoming Sunday and Tuesday will not be played as scheduled.

UNLV previously canceled games against Pepperdine and Eastern Washington due to a positive test for the novel coronavirus.

An ongoing COVID-19 outbreak at Michigan has forced the Wolverines to cancel their football game at No. 18 Iowa on Saturday.

This will be the third straight game canceled. The Wolverines didn’t play Dec. 5 at home against Maryland or last week at No. 3 Ohio State.

The Michigan athletic department said in a statement the decision on the Iowa game was made after conversations among medical experts, health advisers and university administration.

Athletic director Warde Manuel said the team would be without a significant number of players because of COVID-19 and, coupled with attrition because of injuries, would not have enough players at multiple positions. He said there would be more than 50 players unavailable because of positive tests and contact tracing requirements.

Southern California has postponed or canceled its next three men’s basketball games while team activities continue to be halted because of a confirmed case of COVID-19.

The school said it canceled home games against San Francisco on Wednesday and Texas Southern on Dec. 23, and postponed its road game at Oregon State on Dec. 20.

The Pac-12 is working with USC and Oregon State to find a mutually agreeable date to reschedule their game.

USC postponed its Pac-12 opener at home against Stanford over the weekend when it first reported the positive COVID-19 test.

The National Football League says there were 14 new confirmed positive COVID-19 tests among players and another 31 positives among other personnel in the league’s latest round of testing.

That brings the totals since the beginning of August through this past Saturday to 187 players and 328 other personnel who’ve tested positive for the disease out of nearly 800,000 tests.

The first bowl game scheduled to played this season has been canceled.

The Frisco Bowl scheduled for Saturday was called off because SMU is having COVID-19 issues. The Mustangs were scheduled to play Texas-San Antonio in Frisco, Texas.

UTSA will instead play in the First Responder Bowl at Gerald J. Ford Stadium on SMU's campus outside Dallas on Dec. 26 against an opponent to be determined.

The Indiana-Purdue rivalry game has been canceled again.

Both schools had to pull out of last week’s regularly scheduled battle for the Old Oaken Bucket because of COVID-19 issues. The game was rescheduled as one of the Big Ten’s championship weekend bonus games, but the seventh-ranked Hoosiers and Boilermakers jointly announced that neither team will be able to play Friday.

It will be the first time in-state rivals have not met in a football season since the Spanish flu pandemic forced cancellations in 1918 and ’19.