The Latest: Cowboys win, NFC East teams all have 3 wins 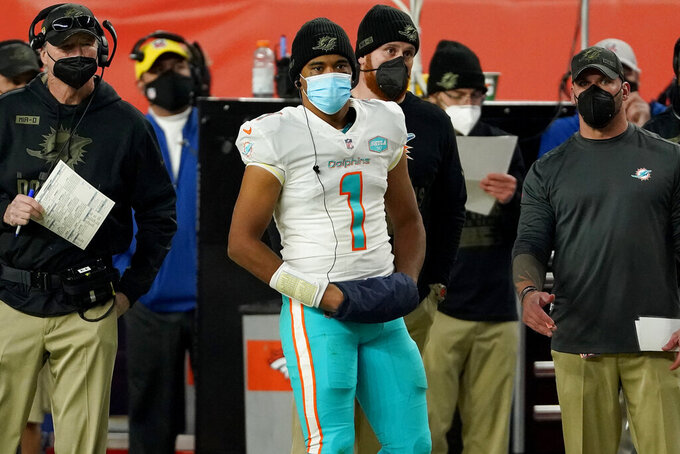 Miami Dolphins quarterback Tua Tagovailoa (1) watches the final minutes from the sidelines during the second half of an NFL football game against the Denver Broncos, Sunday, Nov. 22, 2020, in Denver. (AP Photo/Jack Dempsey)

Somehow, the NFC East race has become even tighter and weirder.

The Dallas Cowboys beat the Minnesota Vikings 31-28 on Sunday to earn their third win of the season. Andy Dalton threw three touchdown passes. Elsewhere in the division, the Eagles lost, Washington won and the New York Giants are off this week.

That means the NFC East leader is still Philadelphia at 3-6-1. The Giants, Cowboys and Washington are all right behind with a 3-7 record.

The Denver Broncos beat the Miami Dolphins 20-13 on Sunday, denying Tagovailoa a fourth straight victory to start his career.

The Broncos not only prevented Tagovailoa from becoming just the second rookie in the last 40 years to win his first four starts but they sacked him a half-dozen times and knocked him from the game in the fourth quarter.

The Dolphins didn’t announce an injury to Tagovailoa before game’s end, but the lefty walked gingerly to the sideline after his final sack. Ryan Fitzpatrick closed the game for the Dolphins at quarterback.

Adam Thielen’s second touchdown gave the Minnesota Vikings a brief lead on the Dallas Cowboys early in the fourth quarter, before the Cowboys went back ahead 24-21.

Thielen’s first score was a one-handed, falling-down grab in the back corner of the end zone as he was being held by Cowboys cornerback Anthony Brown.

Aaron Rodgers threw three touchdown passes in the first half to give Green Bay a 28-14 halftime lead over Indianapolis in a strange but entertaining game.

The Packers and Colts had two turnovers each, with Rodgers taking advantage of Indy’s second giveaway by leading the Packers to two scores in less than 2 1/2 minutes. That gave Green Bay a 21-7 lead.

Rodgers also drew a 51-yard pass interference penalty against Indianapolis cornerback Rock Ya-Sin with 20 seconds left in the first half. The penalty moved the ball to the Colts 4-yard line and Rodgers hooked up with Jamaal Williams for a touchdown pass on the next play.

Justin Herbert had the best first half by a rookie quarterback since at least 1991 to give the Los Angeles Chargers a 24-6 lead over the New York Jets at halftime.

Herbert completed 23 of 31 passes for 277 yards and two touchdowns. The completions, attempts and yards are the most by a rookie QB in the last 30 years.

His touchdown passes to Mike Williams and Hunter Henry also extended his streak of multiple touchdown games to seven, which is also a rookie record.

The winless New York Jets don’t look much closer to getting that elusive victory.

The Los Angeles Chargers were beating the Jets 24-6 at halftime on Sunday. The Chargers have struggled this season with a 2-7 record but put up big passing numbers against New York’s defense. Rookie quarterback Justin Herbert is 23 of 31 passing for 277 yards and two touchdowns.

The Jets, who would fall to 0-10 if they lose, have just 82 total yards of offense. Joe Flacco is 3 of 8 passing for 30 yards and one interception.

Some football fans are making $9 donations to Joe Burrow's Hunger Relief Fund for southeast Ohio after the quarterback's knee injury on Sunday.

The Cincinnati Bengals rookie, who wears No. 9, was hurt in the third quarter of the team's 20-9 loss to Washington and had to be carted off the field. After the game, he posted on Twitter: “Thanks for all the love. Can’t get rid of me that easy. See ya next year.”

Burrow has lots of fans in Cincinnati and also in Louisiana, where he led LSU to a national championship during his final college season.

Packers center Corey Linsley has left the game with a back injury and his return is questionable.

Green Bay adapted by moving left guard Elgton Jenkins to center and plugging rookie Jon Runyan in at left guard. Linsley was charged with a fumble on a botched snap on the Packers’ opening possession.

Justin Herbert tied George Ratterman for the fourth fastest to reach 20 career touchdown passes during the second quarter of the Los Angeles’ Chargers game against the New York Jets.

Herbert connected with Mike Williams for a 39-yard score to extend the Chargers’ lead to 14-6. Williams caught it at the Jets’ 27 and shook off two New York defenders before scoring.

Manning spent his entire 16-year career with the New York Giants after being drafted No. 1 overall by the San Diego Chargers in 2004. Rivers was the fourth overall pick that year but was traded to San Diego for Manning.

Denver's Drew Lock got the start against the Dolphins on Sunday after dealing with bruised ribs and a strained oblique.

But the quarterback threw an interception on his second pass. Xavien Howard stepped in front of Tim Patrick and intercepted the ball, giving the Dolphins possession at the Denver 22.

It was the 11th interception this season by Lock and followed a four-interception day at Las Vegas last week.

The Pittsburgh Steelers are still undefeated after a dominant 27-3 win over the Jacksonville Jaguars.

The Steelers — who now have a 10-0 record — fell into an early 3-0 hole in the first quarter but scored 27 unanswered points to cruise to the win. Pittsburgh's Ben Roethlisberger completed 32 of 46 passes for 267 yards, two touchdowns and an interception.

Burrow was carted off the field early in the third quarter with a left knee injury. After the game, he posted on Twitter: “Thanks for all the love. Can’t get rid of me that easy. See ya next year.”

Teammates and opponents ran over to offer their support to Burrow after the injury. The No. 1 overall pick's day ended 22 of 34 passing for 203 yards and a touchdown. Washington beat Cincinnati 20-9.

Burrow has thrown for 2,688 yards, 13 touchdowns and five interceptions this season.

Baltimore’s Dez Bryant has three receptions for 12 yards in the third quarter, his first catches in an NFL game since Dec. 31, 2017 with Dallas.

The 32-year-old Bryant closed his career with the Cowboys after the 2017 season, tore his Achilles tendon in 2018 and was inactive last season. The 2014 All-Pro signed with Baltimore earlier this season. He played in one game without a catch before being activated from the practice squad Saturday.

Joe Burrow has been ruled out for the rest of the Cincinnati Bengals’ game at Washington with a left knee injury.

Burrow got hurt early in the third quarter when he was hit high by Montez Sweat and low by Jonathan Allen after throwing a pass. Burrow’s left leg bent the wrong direction, and the No. 1 pick was unable to put any weight on it as he was helped onto a cart.

Teammates and opponents ran over to offer their support to Burrow after the injury. His day ended 22 of 34 passing for 203 yards and a touchdown.

Cincinnati led 9-7 when Burrow went down. After Alex Smith led Washington on a touchdown drive to take a 14-9 lead, Ryan Finley entered at quarterback for the Bengals.

No. 1 pick Joe Burrow has left the Cincinnati Bengals’ game at Washington with a left leg injury.

Burrow was unable to put any weight on his left leg as he was helped onto a cart and and driven off the field after the play. Washington’s Jonathan Allen hit Burrow after he let go of a pass early in the third quarter.

Burrow had completed 22 of 34 passes for 203 yards and a touchdown before the injury. The Bengals lead Washington 9-7 in the third quarter.

Houston receivers Kenny Stills and Randall Cobb and New England running back Rex Burkhead were all injured on Sunday.

Burkhead injured a knee on a run early in the third quarter. Burkhead remained on the ground for several minutes while he was attended to by trainers and medical personnel. He was eventually helped to his feet and limped to the sideline with the help of two people and the team announced he was out soon after that.

The Pittsburgh Steelers are well on their way to a 10-0 start after taking a 17-3 halftime lead over the Jacksonville Jaguars.

The undefeated Steelers fell into a 3-0 hole in the first quarter but responded with 17 unanswered points in the second. Ben Roethlisberger completed 17 of 25 passes for 180 yards and a touchdown.

The Steelers had a chance to pad their lead, but Big Ben threw an interception in the end zone on the final play of the first half.

Jacksonville, which has lost eight in a row, might be on the verge of a quarterback change. Rookie Jake Luton is 7 of 18 for 87 yards, with consecutive interceptions on his last two drives. Adding in how he finished last week’s loss at Green Bay, Luton has misfired on 17 of his last 25 passes.

Gardner Minshew is inactive, so if Jacksonville does make a change it would be to Mike Glennon.

Around the league, the Ravens had a 14-10 halftime lead over the Titans. Both teams have a 6-3 record. The Saints scored a touchdown late in the second quarter to take a 10-9 lead over the Falcons. Taysom Hill, who is filling in for the injured Drew Brees, has completed 9 of 13 passes for 127 yards for New Orleans.

A fumble on a fourth-and-goal run by No. 1 pick Joe Burrow forced by No. 2 pick Chase Young gave Washington the ball at its own 20 after a lengthy review.

Burrow, the Cincinnati Bengals rookie quarterback, fumbled into the end zone, and replay showed Washington’s Kamren Curl didn’t possess the ball before fumbling again. Instead of a safety or a field goal attempt for the Bengals, Washington got possession up 7-0.

The Carolina Panthers have announced that P.J. Walker will make his first NFL start at quarterback today against the Detroit Lions in place of Teddy Bridgewater, who is inactive with a knee injury.

Walker, who was one of the stars of the XFL before it shut down, has thrown eight passes this season. Panthers coach Matt Rhule has a history with Walker, who played for him at Temple.

Walker gets the start over former third round draft pick Will Grier.

The Denver Broncos are playing their last home game in front of fans today when they host the Miami Dolphins.

The Broncos are allowing 5,700 fans into the game but because of a surge in COVID-19 cases, they’ll play their last three games in an empty stadium.

The coronavirus is also keeping Denver defensive end Shelby Harris sidelined for a third consecutive week and defensive coordinator Ed Donatell is missing his fourth game as he recovers from the virus that hospitalized him last week.

From stars such as Cleveland's Myles Garrett to practice squad players and coaches, many NFL teams are missing manpower because of COVID-19 protocols in Week 11.

About 20 players and coaches are expected to miss Sunday's first batch of NFL games because they're on the COVID-19/reserve list. The 24-year-old Garrett is the biggest name: The defensive end leads the NFL with 9 1/2 sacks but won't be available for the team's game against Philadelphia on Sunday.

The undefeated Pittsburgh Steelers will be without tight end Vance McDonald and rookie offensive lineman Kevin Dotson for their game against Jacksonville.

The roster juggling isn't limited to the players on the field. Both Philadelphia and Cincinnati each won't have three assistant coaches for Sunday's games.