The Latest: Hawaii to drop rules for vaccinated travelers 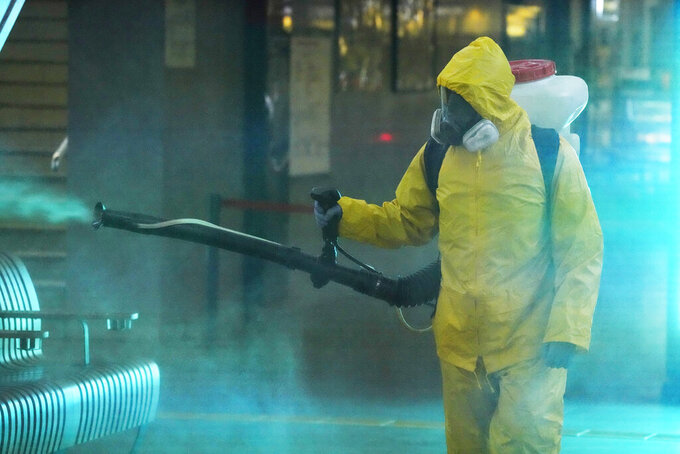 HONOLULU -- Hawaii is dropping its testing and quarantine rules for vaccinated domestic travelers in two weeks.

The governor says he expects the state will reach a 60% vaccination rate among all residents by that time. Ige had previously set a 60% rate as a milestone for allowing more so-called vaccine passports.

Restaurants will also be able to seat up to 75% of their capacity.

People will still be required to wear a mask when gathering indoors. Masks are not required outdoors.

— What should I know about the delta variant?

— “Scary” cluster blamed on the delta variant grows in Sydney

— Italy is banking on a huge windfall of EU pandemic recovery funds to revamp its lagging economy. The future of the eurozone may depend on how well it does.

— Due to the pandemic, Tokyo is shaping up to be the ‘no-fun’ Olympics

SEATTLE -- A Nigerian information technology worker has been indicted on federal wire fraud and identity theft charges after authorities said he and his co-conspirators filed false claims for pandemic-related unemployment benefits in 17 states.

According to an indictment unsealed Thursday in Seattle, Chukwuemeka Onyegbula was linked to at least 253 fraudulent filings for unemployment benefits.

Onyegbula has been detained in Nigeria, but prospects for his extradition to the U.S. were unclear.

WASHINGTON — The White House says it will provide Afghanistan with 3 million doses of Johnson & Johnson’s COVID-19 vaccine to help with a coronavirus outbreak fueled by the delta variant.

White House spokesperson Karine Jean-Pierre made the announcement aboard Air Force One on Thursday as President Joe Biden flew to Raleigh, North Carolina, to encourage Americans to get vaccinated. The announcement also came a day before Biden meets with Afghanistan’s leaders at the White House on Friday.

Jean-Pierre says the Johnson & Johnson vaccines — only one shot is required — could be shipped as soon as next week.

The U.S. is also providing oxygen and other supplies to Afghanistan.

The 3 million doses are part of an overall donation of 55 million doses to the world that the White House announced earlier this week.

McMaster again said his decision to resist closing restaurants and other businesses as long as he could and allow them to reopen more quickly meant South Carolina suffered fewer economic problems.

The May unemployment rate in the state was 4.6%, down from the pandemic high of 11.5% in May 2020 and well below the national rate of 5.8% in May 2021, according to the South Carolina Department of Employment and Workforce.

COVID-19 has killed more than 9,800 people in South Carolina since March 2020. Only about 37% of the population has been fully vaccinated against the disease.

After the bill signing, McMaster said he wasn’t worried about the low vaccine rates or new COVID-19 variants that have caused increased case counts and hospitalizations in other states.

HAGATNA, Guam — Guam could be lifting more travel restrictions as its vaccination rate approaches 75% of the adult population.

Guam Gov. Lou Leon Guerrero has been advised by her Physicians’ Advisory Group to consider lifting the U.S. territory’s travel restrictions once 75% of the adult population has been fully vaccinated, the Pacific Daily News reported Thursday.

Guam has already lifted travel quarantine and testing rules for fully vaccinated people. Everyone else must be tested within three days of their arrival to avoid quarantine.

Currently, 72% of Guam’s adult population is fully vaccinated, officials report. The islands could be just days away from 75%, the newspaper reported.

“My vision for Guam after July 21 is to get back to normal,” the governor said, adding that she would still encourage masks but plans to drop occupancy limits and social gathering restrictions.

BUCHAREST, Romania — Romania’s national vaccination committee chief announced tens of thousands of doses of AstraZeneca vaccine are set to expire and will likely have to be destroyed.

“On June 30, 35,000 AstraZeneca vaccine doses expire. We probably won’t be able to use them. They will enter the destruction procedure,” Valeriu Gheorghita said in a press conference Thursday.

AstraZeneca is one of four authorized vaccines currently being administered in Romania but has faced a low uptake in the country of more than 19 million, where around just 23% of the population have been fully inoculated against COVID-19.

In recent weeks, daily vaccinations have sharply dropped. In mid-May, around 100,000 vaccines were being administered a day, compared to around just 25,000 a day over the last week.

Since the pandemic began, more than a million COVID-19 infections have been confirmed in Romania, and nearly 33,000 have died.

LONDON — Britain on Thursday added 17 countries and territories, including Malta, the Balearic Islands and Madeira, to its “green” list of safe travel destinations amid pressure from airlines and travel companies to relax COVID-19 restrictions.

The additions mean that people traveling to those destinations will no longer have to self-isolate for 10 days when they return to the U.K.

The government also announced its intention to relax current rules and allow travelers who have been fully vaccinated to visit “amber” list countries without having to self-isolate on their return to Britain.

The Department for Transport said it expects to implement this policy in phases later in the summer. The amber list currently includes the U.S. and most of the European Union.

SAN FRANCISCO — San Francisco city workers will be required to be vaccinated against the coronavirus when a vaccine receives full federal approval.

The policy covering 35,000 municipal workers may be the first by any city or county in the U.S., the San Francisco Chronicle reported Wednesday.

Employees who refuse to get vaccinated and don’t get a medical or religious exemption could be fired.

The three COVID-19 vaccines currently available in the U.S. are being dispensed under emergency authorization by the Food and Drug Administration.

They are expected to receive full approval in several months and San Francisco city employees will then have 10 weeks to get their shots.

San Francisco, a compact city of nearly 900,000 residents, has had some of the strictest pandemic-related restrictions in the country and its vaccination rates are very high.

The vaccination policy for city employees covers a wide range of jobs but it does not include teachers, who are school district employees.

NAIROBI, Kenya — The director of the Africa Centers for Disease Control and Prevention says at least 20 countries across the continent of 1.3 billion people are in the grip of a “very devastating” third wave of COVID-19 infections and the Delta variant first identified in India “may have played a very significant role.”

John Nkengasong tells reporters that Africa has seen a 30% increase in new cases compared to the previous week.

Meanwhile, crucially, just 1% of the population on the continent has been fully vaccinated, and the World Health Organization says eight African countries have exhausted their stocks of vaccines.

“We are completely lagging behind, we just don’t have vaccines,” he said. “The third wave is extremely brutal.”

He said the peak of this third wave is “remarkably higher” than that of the second wave in Africa and more and more health centers are saying they are overwhelmed.

Africa has more than 5.2 million confirmed virus cases including more than 139,000 deaths.

MADRID — Spain’s foreign minister says that the government doesn’t plan to change rules of entry for British tourists amid a growing number of infections with the coronavirus Delta variant there.

The United Kingdom, a major source of vacationers for tourism-dependent Spain, is considered by Spanish authorities a low risk country, with its citizens allowed free entry without showing negative virus tests or proof of vaccination. But a mandatory quarantine on return from Spain demanded by British authorities has stopped many British tourists willing to book a holiday in the southern European country.

“For the time being we maintain our measures, the measures we have adopted to allow British citizens enter our territory,” Foreign Minister Arancha González Laya said Thursday.

Spain will continue providing health data to British authorities in the hope of being de-listed from the group of destinations where a quarantine on return is required, the minister said.

The groups said Thursday they have submitted legal documents to the High Court seeking to compel the government to publish the findings.

Many in the arts world feel they are being unfairly prevented from opening venues at full capacity, while sports events are being held in front of thousands of fans. Under pressure from European soccer authorities, Britain has agreed to let more than 60,000 fans attend each of the semifinals and the final of Euro 2020 next month.

The government’s Events Research Program has seen crowds return to events including a darts tournament, a business conference and a music festival, with testing and social distancing measures.

Almost a year after face masks became mandatory indoors and outdoors, people from Saturday will no longer be required to wear them outside as long as they can stay at least 1.5 meters (5 feet) apart.

Darias also said spectators will be allowed back into top-flight soccer and basketball games from next season.

Darias says the trend of Spain’s pandemic metrics is “favorable,” and the country is in the vanguard of European Union efforts to vaccinate their people.

MOSCOW — Coronavirus infections continue to soar in Russia, with the authorities reporting 20,182 new cases on Thursday and 568 further deaths. Both tallies are the highest since late January.

A surge in infections that hit Russia earlier this month comes as the authorities struggle to overcome widespread vaccine hesitancy and immunize its 146 million people. As of Wednesday, only 20.7 million — or just 14% of the the population — have received at least one shot of the vaccine, while 16.7 million — 11% — have been fully immunized.

In response to the soaring contagions, authorities in 14 Russian regions have made vaccinations mandatory for certain groups of people, such as state officials, those employed in retail, healthcare, education, restaurants and other service-providing businesses. In most of those regions, eligible companies are required to ensure vaccination of at least 60% of their staff in the coming months.

Russia’s state coronavirus task force has reported a total of over 5.3 million confirmed coronavirus cases in the pandemic and more than 131,000 deaths.

COPENHAGEN, Denmark — Danish health officials are urging soccer fans who attended the Euro2020 game between Denmark and Belgium in Copenhagen on June 17 to be tested after they found at least three people who afterward tested positive with the delta variant.

On Twitter, Denmark’s Health Minister said Wednesday that some 4,000 people sat in the same area as those who tested positive — six sections of the C stands at Copenhagen’s Parken stadium.

Since April 2 when the Delta variant — known for being more infectious — was first discovered in Denmark, 247 cases have been reported.

SYDNEY, Australia — A state government minister has been infected with COVID-19 and another minister is in isolation as a cluster in the Australian city of Sydney worsens.

New South Wales Agriculture Minister Adam Marshall said he was told on Thursday that he had tested positive after dining with three government colleagues on Monday at a Sydney restaurant after an infected diner.

All four lawmakers had been attending Parliament as recently as Tuesday.

Health Minister Brad Hazard said he was self-isolating after being exposed to a potential case at Parliament House.

Hazzard said while standing next to Premier Gladys Berejiklian at daily pandemic media briefings, that he thought she was “fairly safe.”

Pandemic restrictions tightened in Sydney on Thursday as a cluster of the Delta variant increased and states banned travel from either parts of Sydney or from anywhere in New South Wales.

The cluster began last week when a Sydney airport limousine driver tested positive. He was not vaccinated and is suspected to have been infected while transporting a foreign air crew. The cluster had grown to 31 cases by Wednesday.