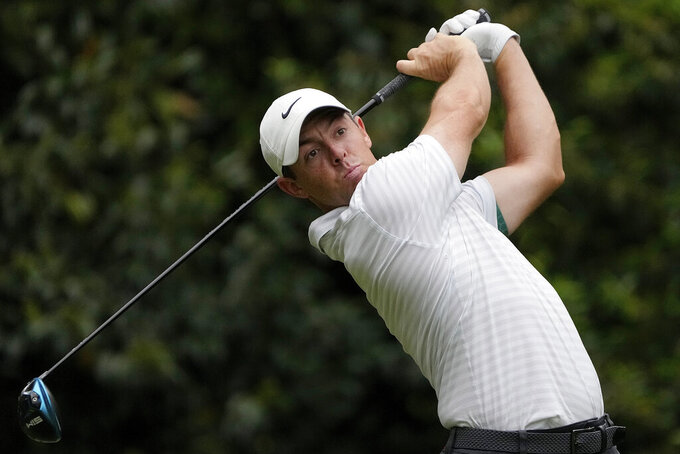 Rory McIlroy, of Northern Ireland, watches his tee shot during the second round of the Masters golf tournament on Friday, April 9, 2021, in Augusta, Ga. McIlroy returned to the site of his first PGA Tour victory and made it clear Wednesday, May 5, 2021, that he is more interested in creating his place in history than chasing Saudi-backed money in a proposed super league. The topic occupying most of the chatter at Quail Hollow Club ahead of the Wells Fargo Championship is renewed efforts by a “Super League Golf" to attract top players for a concept of team golf played around the world for massive riches. (AP Photo/Gregory Bull, File)

The Milwaukee Brewers have joined the list of Major League Baseball teams to have at least 85% of players, coaches and Tier 1 employees vaccinated.

MLB announced before the season it would relax pandemic-related protocols for teams that reached that 85% threshold for vaccination. Manager Craig Counsell and pitcher Brandon Woodruff talked during the Brewers’ pregame Zoom sessions with reporters about how their protocols had been relaxed.

One of the major changes for teams that reach the 85% vaccination mark is they are no longer required to wear masks in the dugout.

“There are some smaller things, but that’s the big one for us that comes with the 85%,” Counsell said. “I think it’s a nice little perk now that we get to enjoy and feel a little bit more normal in the dugout.”

MLB announced at the end of April that nine teams had reached an 85% vaccination rate.

The NFL is offering free Super Bowl tickets to 50 COVID-19 vaccinated fans as part of a global event to encourage getting vaccinations.

Working with the White House COVID Response Team and Global Citizen, the Super Bowl promotion asks fans to share why they got vaccinated or will soon do so. Details how to win the Super Bowl tickets will be announced Saturday night during Global Citizen’s “VAX Live: The Concert to Reunite the World” program. The event brings together artists, entertainers and world leaders, including President Joe Biden, to support vaccine equity.

The show takes place at SoFi Stadium in Los Angeles, where the 56th Super Bowl will be held next February.

More than 3 million vaccinations have been administered at 21 NFL stadiums and facilities since January. In February, 7,500 vaccinated health care workers were invited to attend the Super Bowl in Tampa as guests of the league.

The PGA Tour’s Rocket Mortgage Classic will have some spectators this summer at Detroit Golf Club.

The announcement was made Wednesday, two months before U.S. Open champion Bryson DeChambeau returns to defend his title in the Motor City. Tournament officials have not determined how many fans will be able to buy tickets to the Rocket Mortgage Classic, which concludes on July 4.

Michigan has become the current national hotspot for COVID-19 infections and hospitalizations at a time when more than half of the U.S. adult population has been vaccinated and other states have seen the virus diminish substantially.

Last year in Detroit, the PGA Tour held its fourth tournament after shutting down due to the pandemic and did not allow fans on the course.

DeChambeau won the 2020 Rocket Mortgage Classic by three strokes for his first victory of the season.

The U.S. Golf Association will limit attendance to 7,000 each day of the U.S. Senior Open in July at Nebraska's Omaha Country Club.

The decision was made in coordination with local health officials and is subject to change based on the status of the COVID-19 pandemic.

Fans will be required to answer health questions at the entrance, and face coverings will be required except when a person is eating or drinking. Food and drink will not be allowed within 10 feet of the rope lines.

When the tournament was held in Omaha in 2013, more than 30,000 spectators were on hand for each of the final two rounds.