The Latest: Pistons rookie Doumbouya back home in France 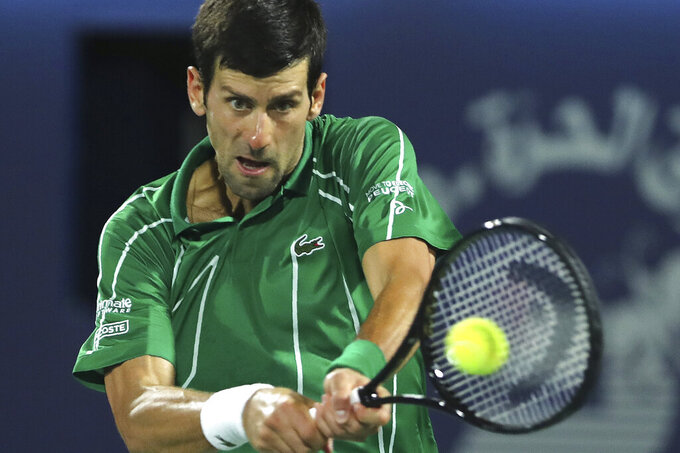 The Detroit Pistons say rookie Sekou Doumbouya is back in France while NBA play is on hold because of the coronavirus crisis.

The league recommended players avoid non-essential travel, but players — in concert with their team — could choose to go to another city and stay there. International travel could lead to logistical concerns if play resumes and a player faces hurdles returning to the U.S.

A Pistons spokesman says the team is aware that the 19-year-old Doumbouya is in France, and that he left to be closer to family during the pandemic.

Detroit drafted Doumbouya in the first round last year. A native of Guinea, he moved to France when he was young and played there before coming to the Pistons. He has averaged 6.4 points in 38 games for Detroit this season.

Darts player Gerwyn Price has made light work of Rowby-John Rodriguez in his opening match on the second night of the PDC Home Tour.

Price was in his kitchen in a hastily arranged setup for this tournament, where players are competing in their own homes and streaming the video.

He averaged 97 in defeating Rodriguez 5-2.

Rodriguez was back at home in Vienna and says he was given permission by his neighbors to play beyond 8 p.m. local time, but he continued a disastrous record against third-ranked Price who has now beaten him in all five meetings.

The San Diego Junior Golf Association has canceled the 53rd annual IMG Academy Junior World Championships set for July 4-10 due to the coronavirus pandemic. The event annually attracts more than 1,250 golfers from more than 50 countries to Torrey Pines and other San Diego golf courses

The tournament has long been known as a recruiting haven for college coaches.

The English Derby will take place early July under the British Horseracing Authority’s “best-case scenario” planning for a resumption of racing.

It was originally scheduled for June 6.

Racing is currently suspended indefinitely in Britain due to the coronavirus pandemic and the season’s first four Classics have been delayed from their usual slots in the calendar.

However, the sport’s Resumption of Racing Group is working to draw up provisional plans for when racing is able to return, with “a phased approach” to racing behind closed doors anticipated in the immediate stages.

In a communication sent to trainers on Friday evening, the BHA said: “Our planning would allow for the (1,000 and 2,000) Guineas to be run in early June, and the Derby and Oaks in early July, with Royal Ascot still scheduled to take place in its existing slot commencing on June 16.”

Serena Williams’ coach, Patrick Mouratoglou, says he is starting an independent tennis league to have professionals play matches without spectators starting in May at his academy in Nice, France.

The ATP and WTA professional tours have been on hold since March because of the coronavirus pandemic and are suspended at least until mid-July.

Mouratoglou announced his venture Saturday, calling it the Ultimate Tennis Showdown or UTS.

He says the plan is to live-stream 10 matches per weekend for five weekends in May and June.

The competition is slated to start May 16. That is when 10th-ranked David Goffin of Belgium, a three-time Grand Slam quarterfinalist, is scheduled to face 103rd-ranked Alexei Popyrin of Australia, whose father is the co-founder of the UTS.

The next Grand Slam tournament on the calendar is supposed to be the U.S. Open, which is planning to begin main-draw competition on Aug. 31 in New York.

The French Open’s start was postponed from May until September, while Wimbledon was canceled for the first time since 1945.

Novak Djokovic says he spoke with Roger Federer and Rafael Nadal about working with the ATP to set up a fund to help lower-ranked tennis players financially affected by the coronavirus pandemic.

During an IG live session he held with three-time major champion Stan Wawrinka on Saturday, Djokovic described what he called “a long conversation” with Federer and Nadal about “how we can contribute and how we can help lower-ranked guys who obviously are struggling the most.”

Djokovic talked about trying to amass somewhere around $3 million to $4.5 million to distribute, perhaps to players ranked from around 200th or 250th to around 700th.

He said the ATP and “most likely” the Grand Slam tournaments would be involved.

Djokovic also said there would be a system devised to determine which players were most in need of the cash.

The men’s and women’s professional circuits have been shut down for more than a month because of the COVID-19 outbreak and are suspended at least until mid-July.

Soccer matches and other sports events in Spain will take place in empty venues at least until the end of the summer, the mayor of Madrid said Saturday.

José Luis Martínez-Almeida told the Onda Cero radio station that the coronavirus pandemic likely “won’t be under control” by then for events with big crowds to resume normally.

“In the spring and summer there won’t be any events with crowds in Spain, and possibly not in the fall either,” Martínez-Almeida said. “Because obviously the situation will not be fully under control. We will have to change our habits and behaviors even after being allowed to go back on to the streets.”

Spain has been one of the hardest-hit countries with more than 190,000 confirmed cases of COVID-19, only behind the United States. More than 20,000 have died in the European nation.

West Ham chief executive Karren Brady believes the timescale for an English Premier League return is no clearer than when the coronavirus lockdown started almost a month ago.

The EPL stated after talks with the 20 clubs on Friday that its objective remains to complete the season but “at this stage all dates are tentative while the impact of COVID-19 develops”.

Brady feels that complex questions still need to be answered over player training, the presence of police at matches, virus testing, hygiene and medical protocols.

Writing in her column in the UK newspaper The Sun, she said: “Players will have been able to retain some physical fitness at home. But if social-distancing rules are still in place, physical match-play training will not be allowed - you can’t tackle from two meters away. So, how match-fit will players be if the season commences, as we all hope it will, by mid-June?

“Police officers will need to be at games even if they are behind closed doors, as some supporters will travel to the stadium, even if they cannot come in to watch. But the police will want to ensure attending matches does not drain resources away from other matters."