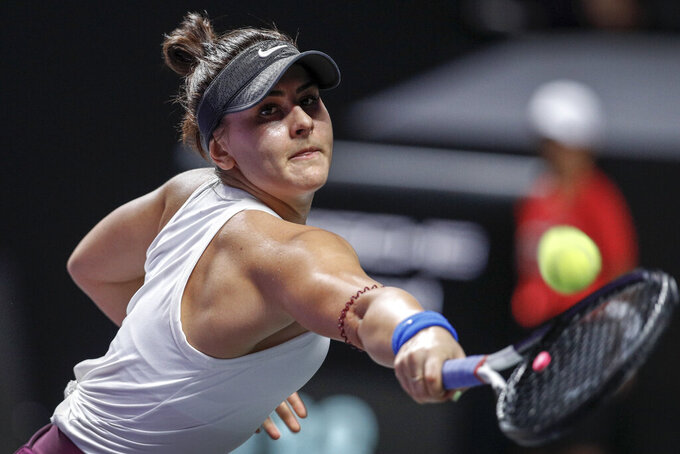 FILE - In this Wednesday, Oct. 30, 2019 file photo, Bianca Andreescu of Canada hits a return shot against Karolina Pliskova of the Czech Republic during the WTA Finals Tennis Tournament in Shenzhen, China's Guangdong province. The Rogers Cup women’s tennis tournament will not be played this year due to the COVID-19 pandemic. Tennis Canada announced that the event, scheduled for Aug. 7-16 in Montreal, is off the schedule, Saturday, April 11, 2020. (AP Photo/Andy Wong)

The Rogers Cup women’s tennis tournament will not be played this year due to the COVID-19 pandemic.

Tennis Canada announced the event, scheduled for Aug. 7-16 in Montreal, is off the schedule.

Quebec’s government announced Friday that no sporting events could be held through Aug. 31, though it left the door slightly open for pro teams.

“Our priority in the management of this crisis has always been to ensure the safety and well-being of our players, fans, volunteers, partners and employees," Montreal tournament director Eugene Lapierre said. "It is thus with a heavy heart that we received this news, but we understand that this decision was necessary.”

Tennis Canada says the women’s event will return to Montreal in August 2021. Bianca Andreescu won the 2019 Rogers Cup when Serena Williams retired in the first set with a back injury.

The women’s and men’s Rogers Cup traditionally rotate between Toronto and Montreal. As of Saturday, the men’s event in Toronto in August was still on the schedule.

Geraint Thomas is still hoping the Tour de France can go ahead at some point in 2020 and believes he is in good shape to go for a second yellow jersey.

The Tour, set to take place between June 27 and July 19, has yet to be postponed or canceled but with sporting events all over the world impacted by the coronavirus pandemic its chances of surviving as scheduled appear remote.

Thomas, the 2018 champion, also announced a charity ride - in his garage - in support of Britain's National Health Service.

“I think I’m in my prime at the moment,” the Welshman told BBC Radio Five Live. “Obviously there are bigger things that need to be sorted out first but as soon as it’s safe and ready to go ahead we’d love it to happen. I’m praying and hoping it goes ahead at some point."

Steven Gerrard is leading the well-wishes for Kenny Dalglish after it was revealed the Liverpool great had tested positive for coronavirus.

Gerrard played under Dalglish when he returned to manage Liverpool for a second stint between January 2011 and May 2012.

The former Liverpool captain posted a picture of one of his daughters alongside Dalglish on Instagram and wrote “Get well soon king” in a nod to his old manager’s nickname.

Dalglish’s family released a statement Friday night which confirmed the 69-year-old had been hospitalized on Wednesday in order to treat a separate infection which required intravenous antibiotics.

Dalglish won nine league titles during his time as player and manager at Liverpool.

The former Celtic and Scotland forward was given a routine test for COVID-19 after being admitted and the result showed up as positive - although he is displaying no symptoms.

The statement said: “In keeping with current procedures, he was subsequently tested for Covid-19 despite having previously displayed no symptoms of the illness. Unexpectedly, the test result was positive but he remains asymptomatic."