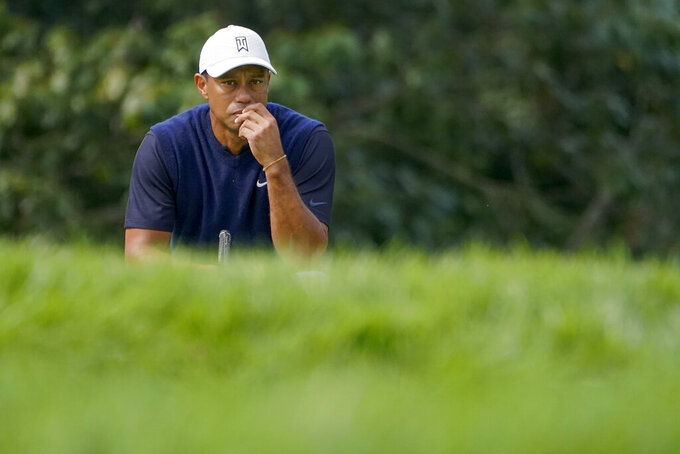 Tiger Woods, of the United States, waits to hit on the 13th hole during the first round of the US Open Golf Championship, Thursday, Sept. 17, 2020, in Mamaroneck, N.Y. (AP Photo/Charles Krupa)

Playing with a pair of fellow Oklahoma State Cowboys made Matthew Wolff feel awfully comfortable in his first U.S. Open.

Paired with Rickie Fowler and Viktor Hovland in the opening round, Wolff shot a 4-under 66 at Winged Foot to finish in a three-way tie for second, a shot behind Justin Thomas.

“I think it kept me calm,” Wolff said. “Having Viktor and Rickie out there was really nice.”

Wolff had two birdies on the front nine and ran off three straight after his only bogey, on the par-3 10th. He's tied for second with Patrick Reed and Thomas Pieters after finishing tied for fourth at the PGA Championship.

Benign conditions at Winged Foot have led to some rare low scores at the difficult course.

Louis Oosthuizen's 5-under 30 on the front nine is evidence of that.

Bouncing back from a shaky start, Oosthuizen had an eagle and three birdies to close out the front nine, finishing with a 3-under 67 in the first round of the U.S. Open.

Starting his round on No. 10, the South African shot 37 on the back nine to turn in 2 over. He opened the front with a 5-foot birdie putt on No. 1 and holed out for eagle from 148 yards on the par-4 second.

Oosthuizen is two back of leader Justin Thomas.

Thomas Pieters stayed home for more than five months during the pandemic, skipped the PGA Championship and recently became a father.

It hasn't seemed to hurt his game at the U.S. Open.

Taking advantage of ideal scoring conditions at Winged Foot, Pieters had five birdies to offset a bogey at the par-5 12th to shoot a 4-under 66. That puts him in a tie for second with Patrick Reed, one behind Justin Thomas.

Pieters delayed his return to competitive golf after the coronavirus shutdown due to the birth of his first daughter, Florence. The Belgian returned to finished third at the Celtic Classic in Wales last month.

Will Zalatoris has the second ace at Winged Foot's par-3 seventh hole.

Patrick Reed had the first on the 165-yard hole early in the opening round of the U.S. Open. Zalaoris followed him into the cup on a 9-iron shot that landed in the middle of the green and trickled into the hole.

Zalatoris, who led the 2020 Korn Ferry points list, moved back to even par with the ace after two early bogeys.

The 24-year-old is competing in his second U.S. Open after a stellar junior career and playing at Wake Forest. Zalatoris won the 2014 U.S. Junior Amateur and played on the 2017 Walker Cup team.

Phil Mickelson opened his return to Winged Foot with two birdies but gave both shots back over the next two holes.

Mickelson blew a one-shot lead on the 18th hole in 2006 for the most painful of his six U.S. Open runner-up finishes.

Through the first four holes, he hasn’t found a fairway. He hacked out of the rough on the first two to get within birdie range but couldn’t salvage par after finding trouble on 3 and 4.

The 50-year-old wouldn’t have qualified for the field under normal circumstances, and had said he wouldn’t ask for a special exemption. But when the USGA reset the qualifying standards because of the pandemic, it took the top 70 players instead of the top 60. Mickelson made it based on being ranked 61st.

Justin Thomas is leading the U.S. Open at 5 under par through 18 holes.

Thomas arrived at No. 18 tied with Patrick Reed, who had already finished a round that included a double bogey and a hole in one. But Thomas made a 25-foot putt for birdie on the last hole to move into the lead by himself.

Thomas had one bogey and six birdies, including three in a row over Nos. 9, 10 and 11. He was playing with Tiger Woods, who also birdied three straight holes while making the turn but then finished up with three bogeys and a double in the last six holes.

Reed salvaged his round after taking a double-bogey on the fifth hole. He rallied with a birdie on No. 6 and then one-hopped his tee shot into the cup for a hole in one on the seventh. Three more birdies on the back nine left him at minus-4.

Rory McIlroy was in third at minus-3.

Tiger Woods is at even par after a bogey on No. 13 stalled his his move up the leaderboard.

Woods made the turn with three straight birdies on Nos. 9, 10 and 11 and was at 1 under par after lipping out on a 17-foot birdie putt on the 12th hole. But he dropped a stroke on the par-3 13th hole after putting his tee shot in the bunker and then two-putting from 19 feet.

Woods was playing with leader Justin Thomas, who also birdied Nos. 9, 10 and 11. Thomas was the leader at minus-4 through 13 holes.

The final groups of the morning round have all made the turn, with the second half of the field preparing to tee off just after noon at Winged Foot in Westchester County in New York.

Justin Thomas has moved into the lead of the U.S. Open with three straight birdies while making the turn to drop to 4 under par.

Thomas sank a 9-foot putt on No. 11 to pull ahead of amateur Davis Thompson, who had been out to the early lead. The University of Georgia All-American bogeyed No. 13 to fall to minus-3. No amateur has won the U.S. Open since Johnny Goodman in 1933.

Thomas’ best finish in the U.S. Open was a tie for ninth in 2017. He won the PGA Championship that year for his only major victory.

Amateur Davis Thompson is leading the U.S. Open through 13 holes.

Thompson birdied Nos. 6, 7, 8 and 11 to drop to 4-under at Winged Foot. That’s a one-stroke lead over Justin Thomas. Rory McIlroy is among a trio that are two strokes back at minus-2.

Thompson was an All-American at Georgia and a finalist for the Jack Nicklaus Award given to the top player in college golf. He qualified as the No. 3 player in the World Amateur Golf Rankings and is making his U.S. Open debut.

No amateur has won the tournament since Johnny Goodman in 1933.

For a U.S. Open course that’s one of the toughest, and with no spectators allowed, there’s been plenty of cheering in the opening round Thursday.

The cheers have come from the smattering of volunteers. And they had reason.

Paul Waring holed out for a birdie from the fifth fairway after driving into the rough. Moments later, Patrick Reed made a hole-in-one on the seventh hole.

Leading the way is an amateur, Davis Thompson of Georgia. He was at 3 under. Rory McIlroy wanted to get off to a good start for a change, and he was at 2 under.

Tiger Woods was 1 over through seven holes.

The course is forgiving enough that Jordan Spieth managed to recover from his tough start. With three birdies, he was back to even par.

Jordan Spieth already is facing an uphill battle after only two holes at the U.S. Open.

He first made bogey from the fairway when his shot rolled down to the bottom of the green and he three putted. And then it got worse.

Tiger Woods, Justin Thomas and Collin Morikawa were waiting on the second tee when Spieth in the group ahead arrived in a golf cart. His tee shot got caught in a tree and he had to return to the tee to play his third. He wound up with a double bogey and was 3 over after two holes.

Spieth has not won in three years. He was eliminated after the first round of the FedEx Cup playoffs. And then he missed the cut last week in the Safeway Open.

Brandon Wu kicked off the 120th U.S. Open with a drive into the right side of the fairway at Winged Foot.

Hitting fairways is paramount at Winged Foot. For starters, it's tough to advance the ball very far. But the greens are severe, and the bunkers are as much as 8 feet deep. That explains why only two players out of 750 who have started the previous five U.S. Opens at Winged Foot finished under par.

Tiger Woods and Rory McIlroy will get an early start Thursday, though they begin on opposite ends of the West Course. The opening round began with cloud cover. The rest of the week is expected to feature plenty of sunshine and mild weather, unusual for a U.S. Open.

Then again, it's been 113 years since the U.S. Open was played in September. It was moved from its traditional June spot in the calendar when golf shut down for three months in America because of the COVID-19 pandemic.