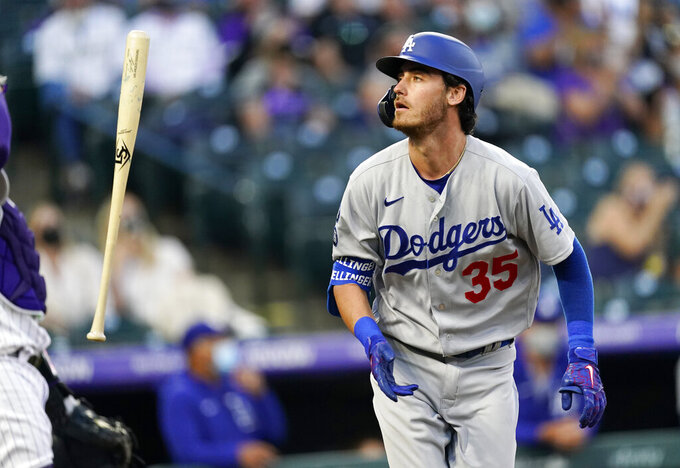 FILE - In this April 2, 2021, file photo, Los Angeles Dodgers' Cody Bellinger tosses his bat after flying out against Colorado Rockies starting pitcher Antonio Senzatela during the second inning of a baseball game in Denver. Bellinger is ready to return from a broken leg that's sidelined him for nearly two months. Dodgers manager Dave Roberts said Friday, May 28, the 2019 NL MVP will start in center field on Saturday and Sunday against San Francisco. (AP Photo/David Zalubowski, File)

A look at what's happening around the majors Saturday: ___

Cody Bellinger is ready to return from a broken leg that’s sidelined him for nearly two months.

Bellinger has been out since April 5 with a hairline fracture in his left fibula. The World Series champion Dodgers went through a rough patch without him but have since won 13 of 15 and sit a half-game behind the NL West-leading San Diego Padres.

Inclement weather gave Will Craig a day off to decide how to handle his egregious fielding mistake Thursday. The Pittsburgh Pirates rookie first baseman is going with humor.

“I guess I’m going to be on the blooper reels for the rest of my life,” Craig said Friday before the Pirates’ game with the Colorado Rockies was postponed because of rain. The game will be made up as part of a split doubleheader Saturday with the first game starting at 12:05 p.m. and the second scheduled for 4:05 p.m.

Craig is expected to be back in the lineup for the opener of the twin bill, two days after his mental lapse cost Pittsburgh big in a 5-3 loss to the Chicago Cubs. Craig failed to step on first on Javier Baez's two-out grounder, instead trying to chase Baez down for a tag — setting of a series of miscues that led to a Cubs run. The meltdown went viral online and was played repeatedly on highlight shows.

“It all boils down to me losing my brain for a second,” he said. “I take full responsibility for it and now will just try to keep moving forward. I know I’m a good defensive player and I can do a lot of good things on that side of the ball.”

The family of a former Comiskey Park vendor is crying foul after the Chicago White Sox removed her name from a ballpark food area dedicated to her honor and renamed it for manager Tony La Russa.

Lorretta Micele sold beer and hot dogs for more than six decades before dying in 2014. Chicago opened Loretta's Lounge in her memory, but said the area was changed to La Russa's Lounge after the 2019 season — before La Russa returned to the team last offseason.

“For them to not even notify us, you know, it’s a shame,” Lou Soto, a great-grandson, said of the name change.

The White Sox said they’re planning to give a replica of the Loretta’s Lounge sign to the family.

“Prior to Tony La Russa becoming manager, a space that had been named after La Russa for many seasons was relocated to the current area on the 100 level during the 2020 season,” a team statement said. “Loretta Micele has always been a treasured member of the White Sox family and a plaque in her honor remains in the space to honor her memory despite the name change.”

A majority of Major League Baseball’s 30 teams have been able to relax coronavirus protocols after two additional clubs qualified and raised the total to 16 franchises reaching 85% vaccinations for players and other on-field personnel.

The commissioner’s office and the players’ association said that three additional teams had reached the 85% level of having received final doses and would be able to relax protocols within the next two weeks once they are fully vaccinated. The teams were not identified.

The pace of vaccinations has slowed markedly, however.