LEADING OFF: Cards' Flaherty out, Manoah up, Lou Gehrig Day 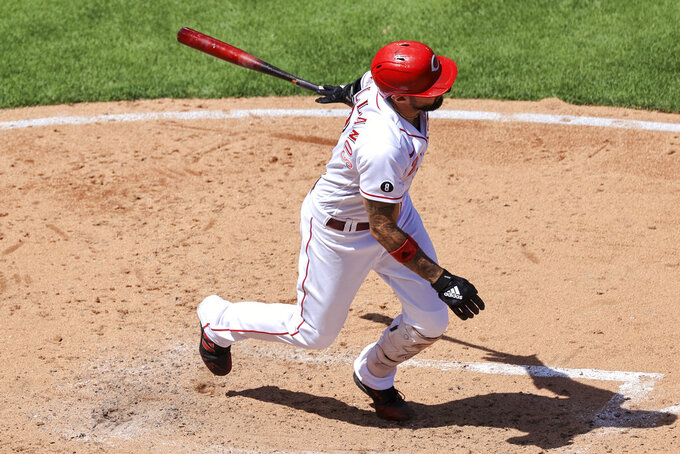 Cincinnati Reds' Nick Castellanos hits a single during the fifth inning of a baseball game against the Philadelphia Phillies in Cincinnati, Monday, May 31, 2021. (AP Photo/Aaron Doster)

A look at what's happening around the majors on Wednesday:

The Cardinals will need to re-do their rotation now that ace Jack Flaherty will be sidelined for a while with what manager Mike Shildt termed a “significant” oblique injury.

Flaherty, who leads the majors with eight wins, left Monday night’s start against the Los Angeles Dodgers with tightness in his left side. Shildt said St. Louis was still trying to determine the grade of Flaherty’s injury, but added that it was going to take a while to heal.

“It is not a minimal situation. It is a real strain or tear,” Shildt said Tuesday.

Flaherty was 8-1 with a 2.90 ERA in 11 starts this season. The Cardinals are 9-2 in games he started. It is the first time in Flaherty’s five big league seasons that he is on the injured list.

Shildt said he is still evaluating how to adjust his rotation. Flaherty’s next start was slated for Saturday against Cincinnati.

St. Louis placed Flaherty on the 10-day IL and called up Johan Oviedo from Triple-A Memphis.

Toronto rookie Alek Manoah faces Miami in his second career start after a sparkling major league debut at Yankee Stadium last Thursday, when he allowed two hits over six innings in a 2-0 win against New York. The 6-foot-6, 285-pound, 2019 first-round draft pick struck out seven and walked two in an 88-pitch outing.

Pablo López (1-3, 2.71 ERA) pitches for the Marlins against Vladimir Guerrero Jr. and the Blue Jays. Guerrero had a career-best four hits Tuesday night, including his major league-leading 17th home run, as the Blue Jays celebrated the return to their temporary Buffalo home with a 5-1 victory over Miami.

The Blue Jays are unable to play in Toronto for a second straight season because of Canadian health restrictions due to COVID-19.

Gehrig, the Hall of Famer who wore jersey No. 4, took over as the starting first baseman for the New York Yankees on June 2, 1925, beginning a streak of 2,130 consecutive games that earned him the nickname of “The Iron Horse.”

A video narrated by Cal Ripken, who broke Gehrig’s record by playing 2,632 straight games, will be shown on scoreboards and first-ball ceremonies and national anthem singers will have an ALS theme.

Nick Castellanos can extend his 18-game hitting streak when the Reds host Philadelphia.

Castellanos doubled and singled Tuesday night as Cincinnati got routed 17-3 by the Phils. He leads the majors with a .361 batting average.

The San Francisco Giants will support Pride Month on the field and on their uniforms and caps.

This Saturday when they host the Cubs at Oracle Park, the Giants will feature Pride colors in the SF logo on their game caps along with a Pride patch on the right sleeves of their uniforms — making them the first major league team to do so.

“Very proud that the San Francisco Giants are taking this step. Very proud to be part of it,” manager Gabe Kapler said. “Looking forward to the impact and the support that we can provide for the LGBTQ+ community.”

The 11 colors represented in the new Pride logo are: red (life); orange (healing); yellow (sunlight); green (nature); blue (serenity); purple (spirit); and black and brown for LGBTQ+ people of color. Light blue, pink and white represent those who are transgender.