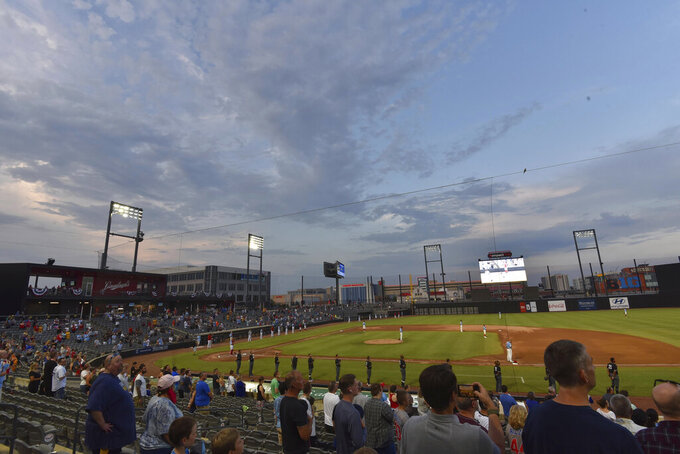 FILE - Players stand during the national anthem before the Rosemont Dogs played their baseball home-opener against the Milwaukee Milkmen at Impact Field in Rosemont, Ill., in this Tuesday, July 7, 2020, file photo. Minor league teams across the country are set to open their seasons Tuesday, May 4, 2021, returning baseball to communities denied the old national pastime during the coronavirus pandemic. (John Starks/Daily Herald, via AP, File)

A look at what's happening around baseball Tuesday:

The St. Louis Cardinals have hit a three-run homer in five straight games, matching a major league record. Nolan Arenado connected Monday night against the New York Mets to tie the score at 5 in the third inning. If the Cardinals are going to extend their streak, it won’t be easy. Next up, they face two-time Cy Young Award winner Jacob deGrom (2-2, 0.51 ERA), who has given up two earned runs all season and was selected NL pitcher of the month for April.