Leonard on All-Star Game: 'It's money on the line' 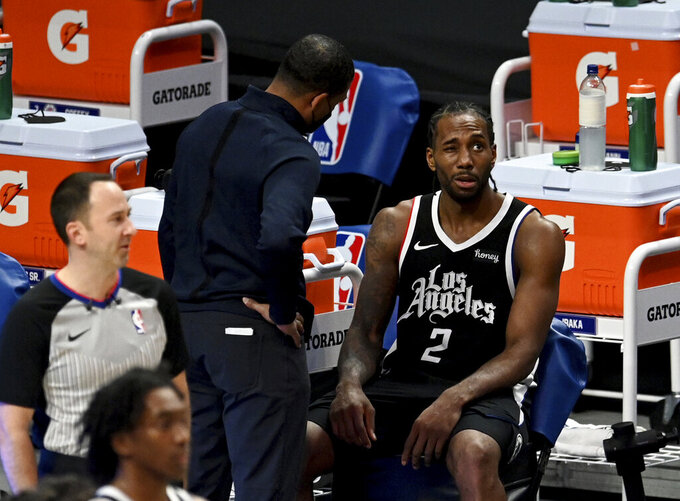 Los Angeles Clippers' Kawhi Leonard sits on the bench after suffering an injury during the second half against the Boston Celtics in an NBA basketball game Friday, Feb. 5, 2021, in Los Angeles. (Keith Birmingham/The Orange County Register via AP)

LOS ANGELES (AP) — Kawhi Leonard, MVP of last year's All-Star Game, suggested the NBA is prioritizing money over the health of its players in planning to stage the midseason exhibition in March.

“We all know why we're playing it,” the Los Angeles Clippers star said Friday night. “It's money on the line, it's an opportunity to make more money. Just putting money over health right now, pretty much.”

The game and its skills competition will be held in Atlanta on March 7, the league told its teams earlier this week. It remains unclear when players would have to report and how testing will work in Atlanta, or if fans will be part of the game.

“We're playing games now and it's still a pandemic, doing all these protocols and rules, so it doesn't really surprise me,” Leonard said on a video call after the Clippers lost to Boston.

Sacramento guard De’Aaron Fox has said he thought the notion of an All-Star Game was “stupid” during a pandemic.

Lakers star LeBron James, who is the second-leading fan vote-getter behind Brooklyn's Kevin Durant, has said he's not happy about staging the exhibition.

“I have zero energy and zero excitement about an All-Star Game this year,” James said. “I don’t even understand why we’re having an All-Star Game, but it’s the agreement.”