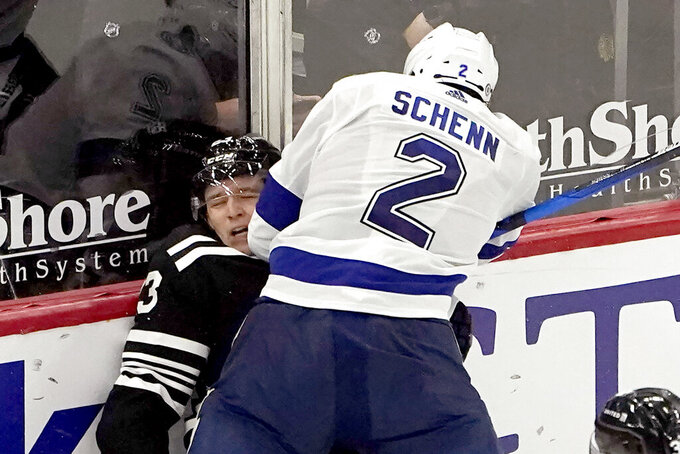 CHICAGO (AP) — Alex Killorn had a power-play goal and scored into an empty net, and the Tampa Bay Lightning defeated the Chicago Blackhawks 7-4 on Tuesday night to clinch a playoff berth for the fourth straight season.

“The expectation is to make the playoffs every single year and you want it to become the norm," Lightning coach Jon Cooper said. “Who knows where it goes from here. But it always feels good to step over that hurdle, so I'm happy with the guys.”

The Lightning scored three straight goals in the second period to put this one away against sloppy Chicago. Tampa Bay finished 7-0-1 against the Blackhawks in the pandemic-shortened season.

Andrei Vasilevskiy made 36 saves to earn his league-leading 29th win, despite allowing a couple of soft goals early. Point has four goals and six assists in six games.

“It's great to be in (the playoffs), but we know we've got to look at improving our game,” Point said. “These last few games, hopefully we can sharpen up on that.”

Brandon Hagel, Dominik Kubalik, Wyatt Kalynuk and Duncan Keith had goals for the fading Blackhawks, who remained seven points behind Nashville in the race for fourth place, and the final playoff spot, in the Central Division with seven games left.

Kevin Lankinen yielded three goals on 11 shots in a first period filled with sloppy play and ugly goals at both ends, and was replaced by Malcolm Subban to start the second. The switch by Chicago coach Jeremy Colliton didn’t energize his team, and Subban allowed four goals on 19 shots the rest of the way.

“If we're going to win hockey games at the end here, we're going to need to be better,” Colliton said. “Just being able to compete defensively, I thought we weren't ready to compete hard enough away from the puck to give ourselves a chance to win.”

The Lightning led 3-2 after the first period.

Cernak scored just 28 seconds in. He picked off Riley Stillman’s pass, raced down the right wing and beat Lankinen with a shot between the legs.

Gourde made it 2-0 just under 4 minutes later, deflecting in Mikhail Sergachev’s feed after the Blackhawks failed to clear.

Hegel cut it to 2-1 midway through the first when his centering pass from behind the net deflected off Coleman’s stick and trickled in.

Barre-Boulet made it 3-1 with 4:56 left in the period when he slipped to the crease and popped in a rebound of his initial backhander from the slot. Kalynuk cut it to 3-2 with 2:01 to go with a shot from the circle that hit Vasilevskiy’s blocker and trickled in.

Point made it 4-2 with wrap-around goal, his 21st, stuffed in off Subban’s right skate, 6:40 into the second. Coleman connected 2:41 later from the low edge of the circle. Killorn added a power-play goal — the first allowed by Chicago in eight games — with 6:21 left in the period to increase the Lightning’s lead to 6-2.

Keith scored on a screened shot with 32 seconds to go in the frame to make it 6-3. Kubalik netted a 5-on-3 power-play goal with 6:09 left in the third, before Killorn sealed it with 51 seconds left.

Along with his goal, the 23-year-old Cernak had an assist on Killorn's empty-netter. The 6-foot-3, 223-pound Slovak also fought Connor Murphy in the second period to earn hockey's “Gordie Howe Hat Trick.” Said Cooper: “When you're a big strong skater and got a good head for the game, good things are going to happen for you.”

After the game, Colliton said defenseman Adam Boqvist suffered a broken wrist in the second period and is out for the rest of the season.

The Blackhawks honored forward Andrew Shaw, who retired on Monday due to concussion issues, with a videoboard salute in the first period. No fans were present, but both teams responded with stick tapping.

Chicago LW Mike Hardman played in his first NHL game. The Blackhawks signed him to a two-year, entry-level contract last month after he completed his sophomore season at Boston College.

Chicago forward Dylan Strome returned at center after being a healthy scratch for two games.

Blackhawks: Host Florida on Thursday in the first of a two-game series.