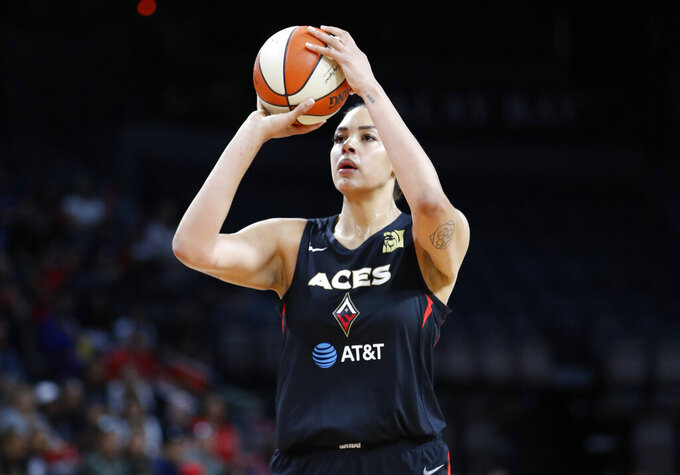 Las Vegas Aces' Liz Cambage, of Australia, plays against the Washington Mystics during the first half of Game 4 of a WNBA playoff basketball series Sept. 24, 2019, in Las Vegas. The Australian Women's National Basketball League says, Friday, Oct. 9, 2020, because of restrictions amid the COVID-19 pandemic, the eight teams will relocate to Queensland state and operate in a bio-security bubble for the duration of the regular season. (AP Photo/John Locher)

Cambage was in early foul trouble but had 14 points and five rebounds Sunday in the Flyer’s 99-82 win over the Townsville Fire in the WNBL championship game.

She was forced from the court with two personal fouls after only three minutes and didn't return until the start of the third quarter.

In joining the Flyers, Cambage was reunited with her Australian Opals teammate Jenna O'Hea. The pair first won the WNBL title with the Bulleen Boomers in 2011.

“I sent Jenna a text message back in March," said Cambage who was in tears at the end of Sunday's final. "I saw a photo of us celebrating the Boomers grand final 10 years ago and I sent it to her and I was like, ‘Jenna, I want this again’.

“I hadn’t even thought about signing yet, I just wanted that moment again with Jenna.”

Cambage missed the WNBA season for the Las Vegas Aces after being medically excused by the league’s independent panel of doctors who deemed her to be at high risk for getting severe illness if she contracted COVID-19.

She signed with the Flyers for her first season in the Australian league since 2018.

Cambage averaged 15.9 points and 8.2 rebounds last season for the Aces, her first with the team. She has played four years in the WNBA after getting drafted second in 2011 by the Tulsa Shock.

She was traded from Dallas to Las Vegas before last season and re-signed with the Aces in April, and was medically excused from the league in July.

Cambage averaged 23.5 points and 8.7 rebounds per game in the Australian league this season. She was also first in blocks and second in field goal percentage.