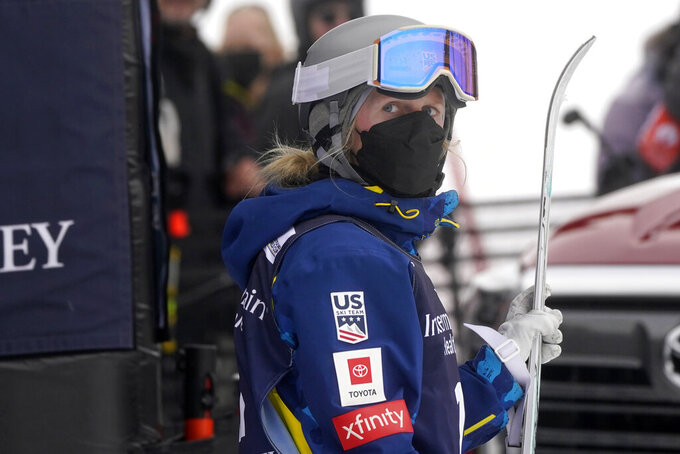 FILE - United States' Hannah Soar holds her skis after a run in the finals of a World Cup freestyle moguls competition at Deer Valley Resort in Park City, Utah, Jan. 13, 2022. With Beijing Olympic organizers adopting a “zero COVID” policy and strict testing just to get on flights to China, skiers, sliders and skaters are taking extreme measures to avoid the coronavirus and its omicron variant. (AP Photo/Rick Bowmer, File)

Mariah Bell had just won the U.S. figure skating championship to earn her first trip to the Olympics. Then came the hard part: remaining coronavirus-free until it was time to leave for Beijing.

“That will be 100% top priority,” Bell said after qualifying for the Winter Games and before retreating back into a lockdown in the hopes that she could dodge the virus for another month.

“I’m triple vaxxed; I’ve done everything I can do there. I’ll wear my masks, wash my hands a lot. I won’t be around people,” Bell said. “We’re going to try to make a bubble situation at the rink I’m at.”

Athletes can spend decades trying to become the best in the world, and another year or two to qualify for what could be their only trip to the Olympics. And this year, they realize, it can start to fall apart with a single sneeze.

With Beijing Olympic organizers adopting a “zero COVID” policy and strict testing just to get on flights, skiers, sliders and skaters are taking extreme measures to avoid the coronavirus and its omicron variant that has derailed Olympic plans for several athletes. Others, including bobsledder and would-be U.S. flag bearer Elana Meyers Taylor, can only hope for the handful of negative tests that would allow them to fly to China to compete.

“I’ve been with the team for the last 2½ weeks, or whatever number we’re at now,” Canadian curling coach Jeff Stoughton said recently from the team's self-imposed isolation house in Abbotsford, British Columbia. “We want to make sure they get their Olympic dream and get over there and are able to compete at their best.”

For American moguls skier Hannah Soar, qualifying for her first Games meant an immediate retreat to the full lockdown of the early days of the pandemic: grocery pickup, no indoor contact at all and treating everyone she encounters as if they have COVID-19. Even when wearing a KN95 mask outside, she still keeps her distance in the lift lines.

She skipped the Tremblant World Cup in Quebec to avoid the travel.

“It’s definitely not how I pictured the month leading up to the Olympics to be. I expected to just be focused on winning Olympics and not concerned about you know, going," she said. “It definitely is a huge mental toll. It’s really anxiety-inducing, to be totally honest with you.

“You kind of have to juggle your sanity and being able to perform at the Olympics, and not lose your mind beforehand. But you also have to get there," she said. "If you test positive you won’t, and that’s a harsh reality at the moment.”

Olympics organizers are requiring everyone coming in for the Games to test negative at least twice beforehand and then again on arrival. Already, several athletes have tested positive, putting their Games in jeopardy, with outbreaks among the Danish men's hockey players, the Swiss women's hockey team and the Norwegian cross-country skiers.

To avoid joining them, other would-be Olympians have gone into various degrees of lockdown, sometimes coming out of isolation only to practice.

The Canadian men’s curling team was working out in the garage at its hideaway and practicing only when the rink was otherwise empty. When not training, they played a lot of pool, cards and PlayStation's Formula One game; they also were perfecting their TikTok challenges.

“Between that and the rink, we’ve been living pretty good. Just kind of operating like one big family,” men’s second Brett Gallant said, while also acknowledging: “It is a long time to have eight guys in the same house.”

The Canadian mixed doubles curling team dealt with the strain of isolation by getting outdoors in Canmore, Alberta. John Morris, a two-time gold medalist, said he went snowshoeing most days, while mixing in some ice fishing.

“I think isolation can have an effect on your mental psyche. We’re trying to make sure that we’re getting outside and in a good frame of mind,” said Morris, who is competing in mixed doubles with Rachel Homan. “We had a small window to prepare, so we’re really focused on our game.”

Figure skater Madison Hubbell, who finished fourth in ice dancing in 2018 with Zachary Donohue, canceled plans to see her family over the holidays. At the school in Montreal where they trained for Beijing, they were tested every day and practice schedules were spread out to allow for disinfecting in between.

Before her mom could watch her skate at nationals, she had to test negative. When she got there, hugging was out.

“You’re standing so close and you want to hug them, but my parents are fully understanding,” Hubbell said.

The U.S. and Canadian women’s hockey teams — the top two favorites for the gold medal — were scheduled to play nine tuneup games through early January, but the last three were canceled due to an outbreak among the Canadian players. The Americans also had games against Russia and Finland canceled.

Instead, they practiced as a team, meeting with the mental performance coaches and trying to master the logistics of getting everyone to China safely.

“We’re definitely pivoting a lot and adapting and adjusting,” U.S. general manager Katie Million said. “Everybody — every league, every sports team, everyone — has had challenges the last two years, and we’re not alone in that.”

Canadian coach Troy Ryan said that after two years, the COVID-19 protocols seem like a normal part of the process. And considering the havoc the outbreak has caused, he’s not going to complain.

“For us cry about situations that we have to overcome as a team, I don’t think it does the whole pandemic very much justice I mean, people are losing their jobs, people are losing lives,” he said. “It’s special that we’re still in a situation getting an opportunity to go to the Olympics.”