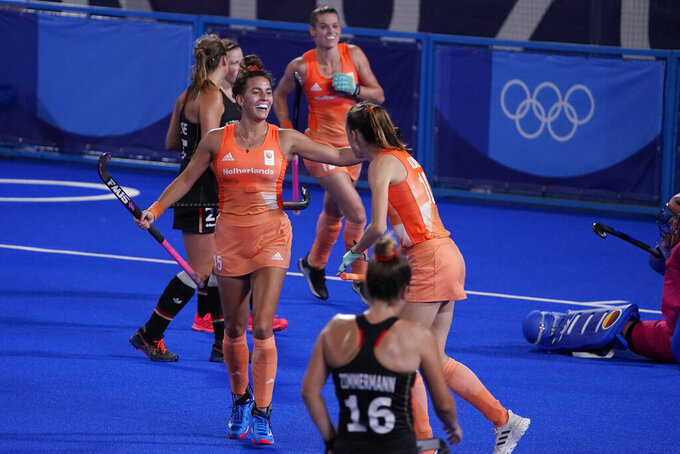 Netherlands' Frederique Matla (15) celebrates with her teammates after scoring during a women's field hockey match against Germany at the 2020 Summer Olympics, Saturday, July 31, 2021, in Tokyo, Japan. (AP Photo/John Locher)

TOKYO (AP) — Frederique Matla scored two goals to help the Netherlands top Germany 3-1 in women’s field hockey on Saturday night in a showdown of unbeatens that decided the top finisher in Pool A.

The winner would play New Zealand in the quarterfinals on Monday. New Zealand eked its way into the medal round with a 2-3 record. The loser would draw Argentina — the world’s No. 2 ranked team. Netherlands coach Alyson Annan said the quarterfinal draw isn't that critical.

“It doesn’t really matter who you play in the quarterfinal,” she said. “You lose and you’re out and if you win, you’re in. Everyone knows that. And it’s not a pool game where you can afford to lose. New Zealand is a quality team.”

The Netherlands converted just one of 17 shots against Britain and star goalkeeper Maddie Hinch on Thursday to win 1-0. The Dutch made 3 of 11 shots on Saturday.

Annan was concerned with her team’s struggles on penalty corners through the first four matches of the tournament. The Dutch still made just one of six against Germany, but she still saw improvement.

“I was pretty happy with the execution,” she said. “Now, getting the execution right is the first thing and scoring’s the next. So I think today’s a good step in the right direction.”

Matla knocked in a hard shot on a penalty corner midway through the first quarter to open the scoring. Late in the first quarter, Laurien Leurink sent a perfect pass right in front of the goal for Lidewij Welten to tap in that put the Netherlands up 2-0.

Germany got on the board midway through the second quarter on a penalty corner when Sonja Zimmermann fired a shot between goalkeeper Josine Koning’s feet.

Matla scored again in the fourth quarter to put the Netherlands in control for good. She led her team with seven goals during pool play.

The Netherlands won gold in 2008 and 2012 and was runner-up in 2016. The tough back-to-back wins against England and Germany have Annan feeling good about her team’s chances this time.

"This is fantastic,” she said. “We’ve had a really good pool series, and playing the game today and against England the other day is really good for our game, getting us in the right position to be able to play the quarterfinal.”