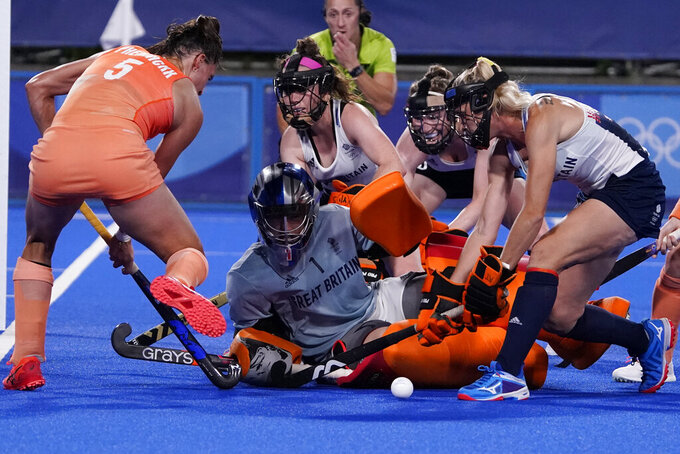 TOKYO (AP) — The Netherlands’ pool play match against Britain on Thursday resembled the stunning Dutch loss from when the teams met in the 2016 Olympic gold medal game.

Again, the Netherlands fired shots relentlessly at British goalie Maddie Hinch, and again, she stopped most of them.

This time, the Dutch did just enough to pull through. Frederique Matla’s penalty stroke goal in the first quarter was the difference in a 1-0 win that kept the Netherlands unbeaten with one game remaining in pool play.

It was a typical hard-fought matchup between the teams.

“It’s always a tough game,” Dutch forward Lidewij Welten said. “They’re really fast, so it’s always tough to play against them. They defend really tight. We like to go to space. So it’s always close."

In an example of the intense play, the Netherlands’ Lauren Stam and Britain’s Elena Rayer knocked heads midway through the third quarter, sending both off the field. Rayer left with a bloody nose, and it took a cleanup crew a while to get the field ready for play.

Netherlands, No. 1 in the FIH world rankings and the most recent world champions, entered the match having outscored the opposition 14-1 in three wins. The Dutch weren’t as dominant against Britain, in part because of missed opportunities. The Netherlands missed all 10 of its shots on penalty corners and made just 1 of 17 shots overall.

“It is huge to have the best keeper in the world in the net," Britain forward Sarah Jones said. "You have that belief when she is between the posts. It was an inspired performance.”

Annan said the team is doing well to create the chances, but the results need to improve. She said her team should be scoring two or three more goals per match.

She’s pleased with the defense, which allowed just four shots. The Dutch allowed a goal in the first quarter of the opener against India and haven't allowed one since.

Matla’s penalty stroke put the Netherlands ahead with just over two minutes left in the first quarter. The Dutch fired eight shots at the goal in the opening period while Britain never got off a shot.

“I didn’t think our first quarter was probably where we needed to be,” Hager said. “I thought we were a bit shy and held off. And then after that, we were quite competitive and had enough opportunities to draw the game.”

Britain threatened in the final minute, but Fiona Crackles missed an opportunity in the closing seconds, not fully getting her stick into a shot with about three seconds remaining. The team fell to 2-2 in pool play.

“We played really well and we built momentum throughout the game,” Jones said. “I thought we dominated the second half. And yes, we are disappointed. But I think games are about getting through, but also about building momentum.”

The Dutch were fine with grinding out a victory.

“You always have those games,” Welten said. “You’ve just got to fight for the win and that’s what we did really good today.”