MLS 2021: Austin FC built in pandemic and ready to play 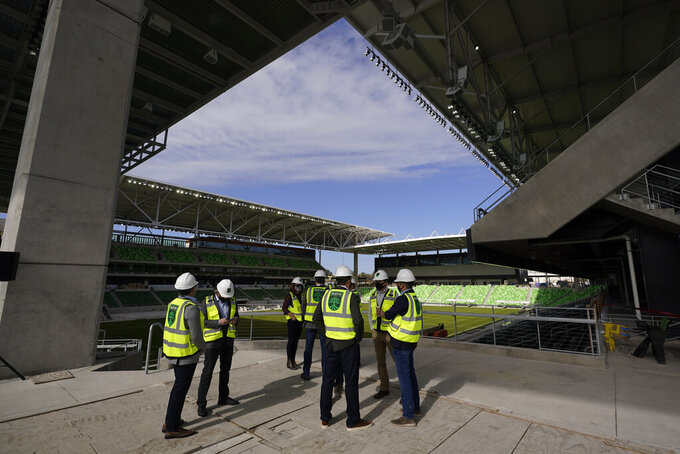 FILE - In this Jan. 25, 2021, file photo, dignitaries gather for a ribbon-cutting at Austin FC's new stadium under construction which has been named Q2 Stadium in Austin, Texas. Austin FC is MLS's newest expansion team and had to build the $260-million facility and a team roster amid the global pandemic. Austin FC opens the 2021 season Saturday, April 17, 2021, at Los Angeles FC. (AP Photo/Eric Gay, File)

All it took was a fight with another city over an attempted Major League Soccer team move before the granting of an expansion franchise, a bruising spat among Austin city council members over land for a new stadium, and navigating the unknowns of an economy-crushing pandemic to build the facility and a roster of players.

Sprinkle in a dose of celebrity Zen and sizzle from Academy Award-winning actor Matthew McConaughey, who is part of the investor group behind Austin FC, and the club is ready to roll into MLS as the league’s 27th and newest franchise. The team's first match is Saturday night at Los Angeles FC.

"It’s been a long process to get here, and we just want to get it right,” said principal owner Anthony Precourt, who first attempted to move his previous team, the Columbus Crew, then was granted an expansion club in early 2019.

Looking back, the first year after that announcement represented the halcyon days of a soccer startup. The stadium broke ground, the business sponsorships starting lining up and Precourt brought in former U.S. soccer greats Claudio Reyna as sporting director and Josh Wolff as head coach.

Reyna had been the sporting director for NYCFC and Wolff had been an assistant coach in Columbus and with the U.S. national team.

Then came the COVID-19 pandemic. While the construction crews forged ahead, Reyna had to cobble together a roster with a scouting department that couldn’t attend matches or meet in person with players and agents.

The team that hits the field Saturday will feature a lineup built with a mix of players collected from throughout MLS and anchored by two designated players from South America: Tomas Pochettino of Argentina, a midfielder from Cordoba-based club Talleres, and Decilio Dominguez, a Paraguayan national team forward who had been with Argentina’s Independiente.

The hard part was doing it all in year of video interviews and chats with players with almost no personal connection.

“You can watch just about every game around the world,” Reyna said. "What you can't see is how a player warms up, what he does when he's out of frame. ... It's the informal part when you get to know the players better. You get to meet the fathers, sometimes the girlfriends, the wives. This also gives you a good understanding of what this player is about.

“You can get a good idea of what a player is about over Zoom, but it turns a little bit into an interview,” Reyna said. “Like all industries, we are missing that interaction with players."

The club was always going to build its initial roster mostly with players from around MLS, Reyna said. Austin still has one spot remaining for a designated player, which could be filled by summer.

Austin won't get to play at its new 20,500-seat, $260 million home until June. But that long road slog at the beginning of the season means lots of home matches on the back end that could prove helpful if the club is chasing a spot in the postseason.

MLS had long eyed Austin, a market dominated by the University of Texas and Longhorns athletics. The league had trademarked Austin FC for a franchise name well before the city entered expansion talks. Precourt's initial purchase deal for the Crew included a promise to keep the team in Ohio for at least 10 years, but it also had a clause to let him move it to Austin.

It's easy to see why the league saw big potential in Texas.

Sandwiched between Dallas, Houston and San Antonio, Austin had no major professional sports franchise. But the Texas capital has been on a boom cycle for decades, as technology companies started here or relocated offices and workers.

And as the area's population surges toward 2.5 million, the dominant Longhorn footprint is slowly starting to shrink. That means more fans looking for new and more teams to follow.

MLS slid in to provide the team, and Commissioner Don Garber said Austin's ownership has “overdelivered” in the buildup of the franchise and its brand. He noted the club's 15,000 season tickets already sold with another 15,000 on a waiting list.

“This is a city on the rise, that marries perfectly with a league on the rise,” Garber said, while also sounding a warning that there’s no guarantee it will produce immediate positive results on the field.

“I tell all new owners it is very difficult to crack the code,” Garber said. “You have to expect that you can’t just come in here and snap your fingers and expect to be MLS Cup champion.”

As part of the ownership group, McConaughey has the title minister of culture and has been busy promoting the team as a big new step for a city that has long been defined by politics and the Longhorns.

“It is so ripe,” McConaughey said. "Soccer is the ideal sport to have for our city. We can now go have conversations as Austin FC fans with that banker in London, that cabdriver in Timbuktu. We have a home team we can talk about."