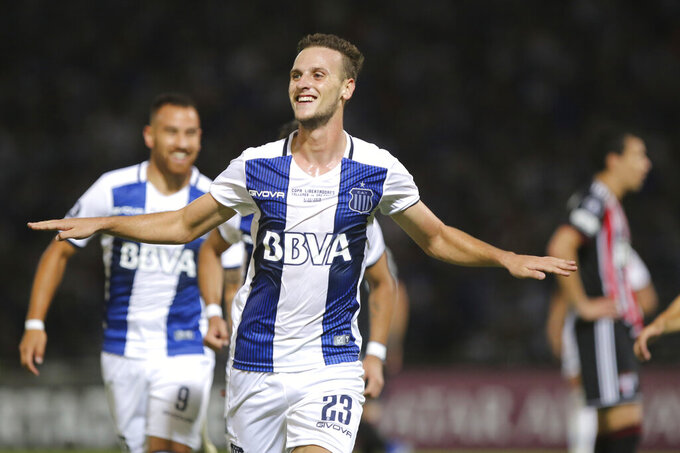 FILE - Tomas Pochettino of Argentina's Talleres celebrates after scoring a goal during a Copa Libertadores soccer match against Brazil's Sao Paulo in Cordoba, Argentina, in this Wednesday, Feb. 6, 2019, file photo. Pochettino will be asked to control the middle of the field for Austin FC. (AP Photo/Victor Quiroga, File)

Whether it was the ongoing financial implications of the COVID-19 pandemic, the delay to the start of the season due to negotiations over the collective bargaining agreement or challenges in bringing players in from overseas, the newcomers joining Major League Soccer for the 2021 season lack some of the panache of previous years.

The bigger moves seemed to involve MLS players going to Europe rather than big names coming to North America.

That said, there are still teams that made offseason additions who can be immediate impact players.

Of course, Austin should be at the top of this list with the expansion side set to kick off Saturday against Los Angeles FC.

And the two designated players for Austin have a chance to be immediate stars.

Forward Cecilio Dominguez signed as Austin’s first DP last summer after the Paraguayan international made his move from Independiente in Argentina. The 26-year-old had eight goals and six assists in 43 appearances for Independiente, but he’s only a few years removed from popping up on the international scene with 21 goals in 74 appearances with Club America in LigaMX.

Dominguez will be joined by midfielder Tomas Pochettino, who signed as Austin’s second DP after moving from Argentina’s Atletico Talleres. Pochettino, 25, will be asked to control the middle of the field and be a distributor to Dominguez and others in the Austin attack.

In terms of recognizable names, Inter Miami may have landed the biggest by nabbing England left back Kieran Gibbs from West Bromwich Albion. Gibbs has made more than 300 appearances for Arsenal and West Brom. He won’t join Miami until his current deal expires in July.

Just as important was the signing of Brazilian defensive midfielder Gregore, who should help bolster Miami’s defense.

Hard to believe but American striker Bobby Wood has never played in MLS. That’ll change this season as the 28-year-old makes the move from the Bundesliga. Wood has spent nearly his entire professional career playing in Germany for various clubs. He spent the past few seasons with Hanover 96 in the second division of the Bundesliga.

Wood’s deal with RSL won’t begin until July. He seemed to be a regular in the striker rotation for the U.S. during World Cup qualifiers in 2017 and 2018 but hasn’t made an appearance for the U.S. on international duty since 2018.

Moving into its new stadium, FC Cincinnati also has a potential young star to build around. Brenner, a 21-year-old Brazilian forward, was the big offseason signing by Cincinnati. He scored 22 goals in 38 appearances across multiple competitions in his first full season playing for São Paulo in Brazil’s Serie A.

The deal for the young star could end up being the richest transfer for a South American player in league history. Brenner’s transfer was for a reported $13 million that with additional incentives could push it beyond $15 million.

Another import from São Paulo will be looking to make his mark in Orlando. Alexandre Pato was without a club after departing São Paulo last summer but got an enticing offer from Orlando City after the team loaned Daryl Dike to Barnsley of the English Championship.

Pato has 27 career appearances for Brazil. Orlando is hoping he can provide a goal-scoring punch. He’s not the same player who scored 63 career goals at AC Milan, but he can still be a potent option as the top of the attack. Pato turned down offers in Europe, Asia and South American to join Orlando City.

Something had to change in Los Angeles after the Galaxy finished 10th in the Western Conference and missed the postseason. The arrival of Greg Vanney as head coach was one big move. But the Galaxy didn’t stop there, bringing in defender Derrick Williams from Blackburn and goalkeeper Jonathan Bond from West Bromwich Albion.

On the cusp of the season, the Galaxy made one more splash signing French winger Kévin Cabral from Valenciennes FC in France’s Ligue 2 to a young designated player contract.

The Timbers didn’t need to tweak much after finishing third in the Western Conference a season ago, but the addition of Argentinian defender Claudio Bravo is a major upgrade. The 24-year-old left back came to Portland from Club Atlético Banfield in Argentina, where he’s also made eight appearances for the under-23 national team and may be getting a callup for the Olympics this summer.