MLS season starts with hopes of returning to normalcy 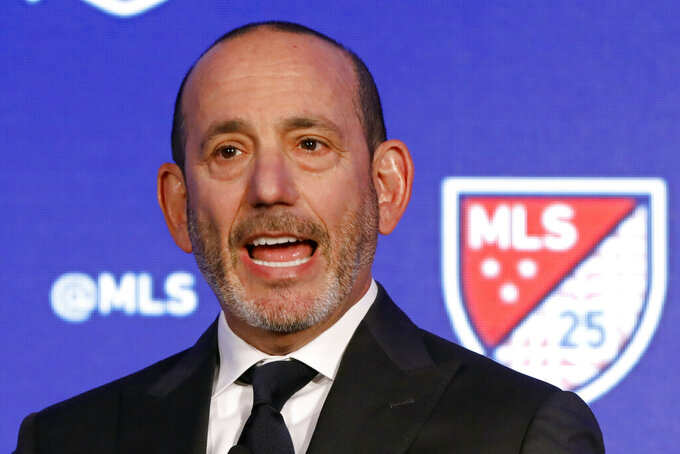 Major League Soccer embarks on the 2021 season with a new labor agreement in hand, the return of two big stars, a new team in Austin, Texas, and lessons learned from 2020.

There still won't be full crowds in most places but there are reasons to be optimistic for the league's 26th season as more Americans get vaccinated against the coronavirus.

The league was two games into the season last March when the COVID-19 pandemic shut down sports in the United States. Play resumed in the summer with the MLS is Back tournament in a bubble in Florida before an abbreviated season held in local markets. The Columbus Crew emerged as the MLS Cup champions.

MLS estimated losses at nearly $1 billion last season, mostly the result of playing in empty stadiums and charter flights for teams. While that will likely improve, the league is expecting another financial hit. As a result, MLS invoked the force majeure clause in the collective bargaining agreement last year.

After a rather contentious back-and-forth — the players had already agreed to concessions in 2020 —- a new agreement was struck in February that will run through the 2027 season.

The season kicks off Friday night with a pair of games: San Jose at Houston and Minnesota at Seattle. The league’s newest team, Austin FC, will play its inaugural game Saturday against LAFC in Los Angeles.

“MLS has always been about momentum,” Commissioner Don Garber said. “More teams, more stadiums, more fans, more players and players that are representing all the exciting activity that takes place on the field. We had the momentum going into last year, and then clearly that got put on pause a bit with with the pandemic. Now that momentum has kicked back in.”

It appears two of the league’s top stars, LAFC’s Carlos Vela and Atlanta’s Josef Martinez, will be back.

Vela, who had an MLS-record 34 goals in 2019, missed the MLS is Back tournament because of his wife’s pregnancy and the birth of their child. Then he was hampered by injuries and appeared in only eight regular-season games.

Martinez was knocked out of last year’s season opener with an ACL injury that required multiple surgeries. He’s not quite at full strength heading into United’s opener, but close.

Martinez got advice and emotional support from Zlatan Ibrahimovic during his recovery.

“Day-by-day, I am stronger. Obviously not 100%, because I think I’ll get there once I start playing more games. But I feel OK,” Martinez said. “I know it’s hard because I haven’t touched the ball in a year, so my timing with the ball when I have to cross is not very sharp right now, but we’re close.”

Austin FC joins this year after overcoming challenges presented by the pandemic, like pulling together a roster and staff in the Zoom era, selling 15,000 season tickets and building a $260 million stadium. They were assisted by a bit of star power: Oscar winner Matthew McConaughey is the team's minister of culture.

Charlotte joins the league next year and St. Louis will join in 2023. An expansion franchise planned for Sacramento fell apart amid the pandemic, and MLS is looking at its options for a 30th team.

There are seven “new” coaches this season. Greg Vanney has moved from Toronto FC to the LA Galaxy, where he'll be tasked with getting a talented roster led by Chicharito on the same page.

His replacement in Toronto, Chris Armas, previously coached the Red Bulls, so he's got league experience, too. Gerhard Struber was hired by the Red Bulls last October and made his coaching debut during the playoffs, but basically this is his first season.

The genuine newcomers include Josh Wolff at Austin, Hernan Losada at D.C. United, Gabriel Heinze at Atlanta and Phil Neville at Inter Miami.

Austin, Columbus and Cincinnati will have new digs.

Austin will debut its home, Q2 Stadium, on June 19 against the Earthquakes. Cincinnati will inaugurate its West End Stadium on May 16 against Miami. The defending MLS Cup campion Columbus Crew will christen their new stadium on July 3 against New England.

The Montreal Impact has rebranded as Club de Foot Montreal, or CF Montreal. The makeover includes a new crest that has a snowflake-like emblem and a new motto “Droit Devant” or “Always Forward.”

The league's Canadian teams will have a tough go of it again because of travel restrictions. Quarantine rules make traveling over the border untenable, so the teams will once again play in the United States for the foreseeable future.

The Whitecaps have relocated to Real Salt Lake's facilities in Utah, while Toronto and Montreal have set up shop in Florida.

Athletes across sports took a more active role in social justice issues following the death of George Floyd. In MLS, the Black Players for Change group was launched by Toronto's Justin Morrow to address systemic racism both in soccer and society.

MLS appointed Sola Winley to the position of executive vice president and chief diversity, equity and inclusion officer in February to ensure underrepresented groups are included in league and team offices, programs and initiatives.