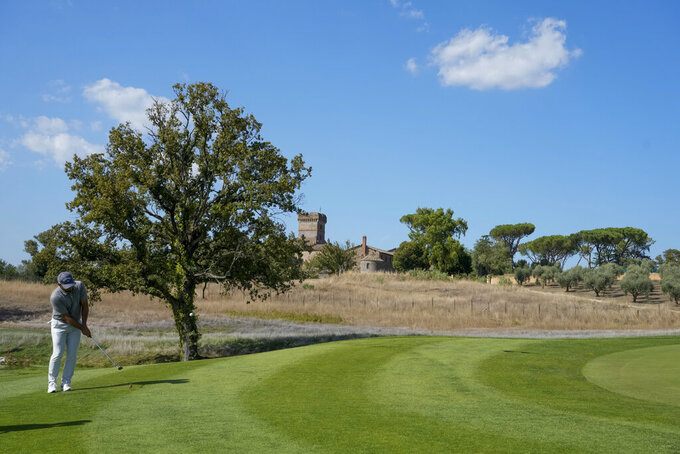 Francesco Molinari hits a chip shot during the first round of the Italian Open golf tournament, in Guidonia, in the outskirts of Rome, Thursday, Sept. 2, 2021. (AP Photo/Andrew Medichini)

GUIDONIA MONTECELIO, Italy (AP) — The man who contributed the most to Europe’s team in the 2018 Ryder Cup triumph will almost certainly be missing from this month’s competition at Whistling Straits, Wisconsin.

Still recovering from a back problem that kept him out of this year’s PGA Championship and Tokyo Olympics, Francesco Molinari all but officially withdrew himself from consideration on Padraig Harrington’s team.

“I don’t think there’s any hope. I don’t even want to consider it with the condition that I’m in,” Molinari told The Associated Press after a 52nd-place finish at his home Italian Open on Sunday. “I don’t think I would be useful to the team so it’s better if someone in better form goes.”

Molinari’s form is far from his sterling performance at Le Golf National in France three years ago, when he became the first European, and second player overall in the competition’s current format, to go 5-0 at a Ryder Cup by clinching the decisive point over Phil Mickelson.

In 2018, Molinari teamed with close friend Tommy Fleetwood to win four points in fourballs and foursomes matches in a partnership that was labeled “Moliwood.”

Molinari and Fleetwood played in the same grouping for the opening two rounds this week but their performances stood in sharp contrast.

Fleetwood ended the tournament in a tie for second behind Danish winner Nicolai Højgaard.

So, did Molinari suggest a new partner for Fleetwood at this year’s Ryder Cup, which will be held Sept. 24-26?

“No, we didn’t talk about it,” Molinari said. “We talked about other things, as you do between friends. We see each other often.”

But Molinari did suggest that this week could serve as practice for a “Moliwood” revival at the 2023 Ryder Cup, which will be held at the Marco Simone club just outside Rome that hosted this weekend's tournament.

“Let’s hope so,” the 2018 British Open champion said. “Let’s hope we can both qualify next time.”

The completely redesigned Marco Simone course was tested for the first time this week.

“It’s a great course,” Molinari said. “There are maybe a couple of things to adjust slightly. That’s absolutely normal for what is essentially a completely new course. A couple of greens where the slope is a bit exaggerated can be shaved down a bit. That’s the only thing.”

How about Højgaard’s ability to drive the green on the 352-yard, par-4 16th hole, which led to an eagle on Saturday?

“That’s OK for match play,” Molinari said. “It can add some intrigue to match play.”