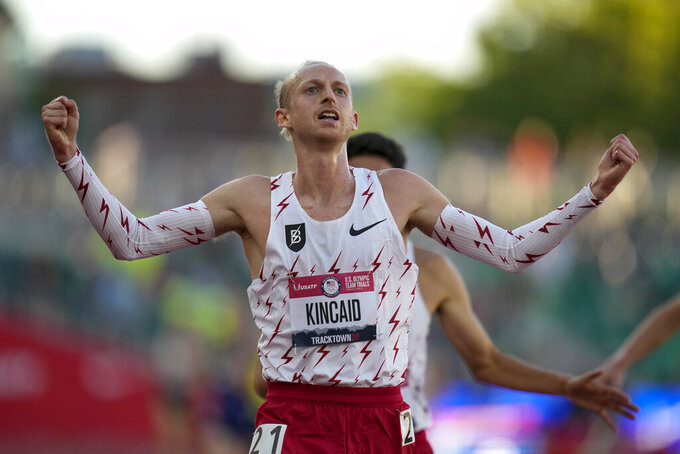 EUGENE, Ore. (AP) — Ever since a track coach named Bill Bowerman tinkered with the idea of pouring rubber into his waffle iron to concoct a better shoe sole for running, Nike and the sport of track and field have become inseparably intertwined.

The results of much of that interconnectedness is on full display in the college town of Eugene — which is where Nike was founded and underwrites virtually every facet of sporting life at the University of Oregon. This week, the university is hosting the track and field Olympic trials. Next year, the sport's world championships — the biggest event in track this side of the Olympics — take the stage.

Though frequently scrutinized the way any market leader is, Nike's command of this sport has been tested over the past few years, both in its dominant position involving sponsorships with track's top names, and also in the way it is perceived by its most fervent fans and critics.

Gender equity battles have led to the defection of several high-profile women runners, including nine-time Olympic medal winner Allyson Felix; a complex doping case involving Nike's most high-profile coach, Alberto Salazar, continues to play out this summer at the Court of Arbitration for Sport; Nike's role in developing new boundary-pushing technology for long-distance running shoes has garnered its share of sideways glances.

Meanwhile, virtually every major executive and organization in the sport — among them, USA Track and Field, and its president, Vin Lananna, and World Athletics president Sebastian Coe, and former USATF head Craig Masback — either has, or once had, some strong connection to Nike.

“You think about all they're supporting — the jobs, the kids, the futures, and it's a tough situation because, yes, they are doing good things," said Kellie McElhaney, who teaches about diversity, equity and inclusion in the corporate world at Cal-Berkeley. “But any time any one organization is so deeply dependent on one source, whether it's a person, or a company, it's a dangerous model.”

The connection that might best illustrate the interdependence of Nike and its running partners is the 23-year sponsorship deal worth a reported $500 million the company cut with USA Track and Field in 2014. It was widely criticized in some corners: Some complained it gave Nike too much power over the sport. Meanwhile, USATF CEO Max Siegel took heat for underselling track's growth potential with an arrangement that spans 2017-2040.

Siegel insisted it set the most sprawling sports operation in the U.S. Olympic space on sound financial footing for the long-term. When the COVID-19 pandemic hit and other U.S. Olympic sports organizations struggled, some of them even going bankrupt, USATF remained stable, in large part because of the Nike deal.

But Siegel does not adhere to the idea that USATF is beholden to its top sponsor.

“There's a lot of conversation over the years about whether they have influence over our decisions,” Siegel said. “We're an independent organization and they handle their matters. They don't consult with us about internal things in our operation."

In 2019, the link between USATF and Nike came under more scrutiny after the company received backlash for its policy of scaling back the contracts of female athletes after they became pregnant.

Over the span of a few months, high-profile runners such as Felix and Alysia Montano went public with soul-baring details about their Nike deals, which essentially lowered their earnings when they became pregnant.

Nike changed its contract terms. In 2018, it had waived so-called performance reductions for 12 months. A year later, it expanded the policy to cover an additional six months.

“We want to make it clear that we support women as they decide how to be both great mothers and great athletes,” said Nike spokeswoman Sandra Carreon-John.

But for some, it was too late.

“When I was with Nike, it was family this, family that, this is the Nike family,” Felix said in a recent interview in The New York Times. “You feel that that’s real, and then you see the other side of things, and it’s completely different.”

This week, Felix announced she is starting her own brand, Saysh, and is running in a spike made by the company. Other female runners, such as Tianna Bartoletta and Colleen Quigley, have also left Nike after what they've described as discriminatory or insulting business practices.

"Nike was trying to offer me less than what they offered me when I came out of college,” Quigley said in a recent podcast. “To me, it was just a slap in the face.”

And yet, Nike still sponsors an expansive roster of women. In track and field, that includes Sha’Carri Richardson, Vashti Cunningham and Elise Cranny, all of whom won U.S. titles and trips to the Olympics last weekend. Two of the world's highest-profile female athletes also work with Nike: tennis players Serena Williams and Naomi Osaka.

The company has won awards for an understated and powerful ad featuring Colin Kaepernick that cut to the core of the current conversation about racial and social justice in this country.

While conversations in the realm of social justice and equity have played out, a different sort of crisis has tested the company. Two summers ago, the famed coach, Salazar, whose running team was funded by Nike, was kicked out of the world championships when news of his four-year doping ban was made public.

Though there was no evidence that company executives directed Salazar's methods, which involved pushing the limits of every rule up to and sometimes past the point of cheating, there were unflattering details of emails between the coach and Nike CEO Mark Parker, who has since retired, in which they discuss his methods.

Salazar's team, the Nike Oregon Project, has since been disbanded. But his case has been lingering in appeal, with a decision from the Court of Arbitration for Sport expected any day. It's news that's bound to rehash details of Nike's role in one of the sport's most sordid doping cases ever — not exactly the flattering headlines an industry leader seeks as the Olympics approach.

“We support Alberto in his decision to appeal and wish him the full measure of due process that the rules require,” Carreon-John said. “Nike does not condone the use of banned substances in any manner. ”

Salazar was hardly the only high-profile leader on Nike's payroll.

In 2015, Coe was a vice president at World Athletics and a paid ambassador for Nike. The relationship raised eyebrows when the federation awarded the 2021 world championships (which will now be held in 2022) to Eugene, where the Nike brand is embedded throughout the college town, without going through its usual bidding process.

Lananna, now the president of USATF, had ties to Nike when he led the Eugene bid effort.

After Coe became president later in 2015, he gave up his deal with Nike. Also, former USATF chair Steve Miller was once a Nike marketing executive.

“I don't want to get into individual issues around companies because I know enough about any organization that, from time to time, you're going to have challenges," Coe said last weekend in Eugene, where he was attending the trials. "But I do think companies like Nike have, overall, had a really good impact on our sport.”

Nowhere has that impact been bigger than on the core subject of shoes.

Since its founding by Bowerman and Phil Knight in 1964, the company became a leader because its core business involved spearheading innovation that helped people run faster.

The most recent improvements in technology led to a new shoe design in 2016 that brought times down dramatically in distance races and shook up the running world. Nike's Vaporfly led World Athletics to invest heavily into a study that forced it to put out a set of complicated guidelines about what constituted a “legal” shoe for distance running.

One vignette that best illustrated the overall inner-connectedness of shoe companies, the running world and the Olympics came on Feb. 29, 2020.

Masback, a one-time elite runner and former USATF CEO, was working as an analyst for NBC during Olympic trials for the marathon. Asked for his opinion about the shoes during a telecast, he had to disclose that he worked as a marketing executive for Nike. He then went on to give an impassioned defense of Nike's new technology.

He could hardly be portrayed as an objective observer. But these days, it's hard for anyone in track to stay objective about Nike given the decades' worth of tendrils the company has embedded throughout the running world.