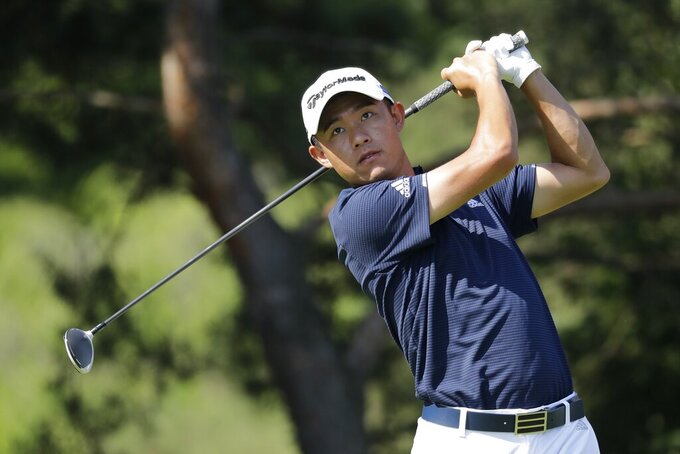 Collin Morikawa hits a drive on the second hole during the second round of the Workday Charity Open golf tournament, Friday, July 10, 2020, in Dublin, Ohio. (AP Photo/Darron Cummings)

DUBLIN, Ohio (AP) — Muirfield Village was supposed to be set up easier for the first of two straight PGA Tour events. It sure didn't feel that way to Brooks Koepka, Justin Rose and others who missed the cut at the Workday Charity Open.

The second round was completed Saturday because of two storm delays. With gentle morning conditions, Koepka had little chance of having enough players fall back to let him get within the top 65 to make the cut. Koepka closed with five birdies in seven holes Friday evening, but his 74-69 was one shot short.

Collin Morikawa takes a three-shot lead into the weekend at 13-under 131, one shot away from the 36-hole record at Muirfield Village that Jason Dufner set three years ago at the Memorial. So the course must have felt easy to him.

But the cut came at 2-under 142. That's the highest score to make the cut since the PGA Tour restarted its season after a three-month shutdown from the COVID-19 pandemic.

Muirfield Village will be set up harder for the Memorial next week. The Workday Open is a one-time event that replaces the canceled John Deere Classic. It's the first time in 63 years the PGA Tour has had consecutive events on the same course.

Rose had an 80, one of six rounds at 80 or higher. It was the seventh time in his PGA Tour career that Rose failed to break 80, and the first since The Players Championship three years ago.

The 67 players who made the cut included M.J. Daffue of South Africa, who got into the Workday Open as a Monday qualifier. Needing birdie on his final hole, he hit his short iron to 2 feet on No. 9 for a 69 to make it. The 31-year-old Daffue is playing only his second PGA Tour event.

Justin Thomas and Kevin Streelman were three behind and in the final group with Morikawa. The third round featured threesomes because of the rain delays.

Nick Watney, Dylan Frittelli and Denny McCarthy missed the cut. They all tested positive for the coronavirus this week but were allowed to play because they already had tested positive, got through self-isolation and showed no symptoms. The tour cited federal health guidelines and research that the virus can still be detected for weeks after recovery but that it no longer is contagious.

As an extra layer of caution, they played in the same group. If they had made the cut, they would have played as a single amidst threesomes.