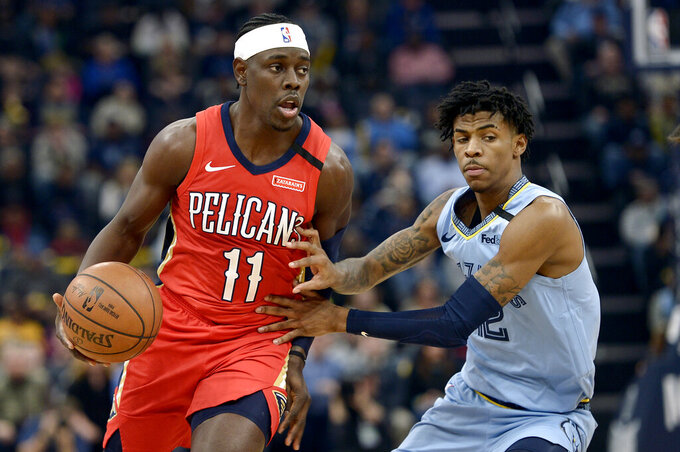 The Pelicans guard will be living in the NBA’s “bubble” when 22 teams gather near Orlando, Florida, this month to resume their suspended season.

Holiday’s wife, Lauren, a former U.S. national team soccer player, is pregnant with the couple’s second child at a time when much of society has been shut down by the coronavirus pandemic. The veteran New Orleans player might be away from home for more than a month.

Meanwhile, Memphis rookie Ja Morant expects to miss his daughter’s first birthday next month. Boston’s Gordon Hayward may leave the team when his fourth child is born in September. And players like Washington’s Bradley Beal and Portland’s Damian Lillard wonder how intense NBA restrictions on player movement will be received.

These are but a few examples of why the NBA, its teams and the players’ union are making mental health and wellness resources available to players now and once they arrive at Disney’s Wide World of Sports complex.

“It is going to leave the guys with a lot of time on their own, and challenges with families, newborns and whatever else they have going on in their personal lives are going to be magnified because they’re going to be in confined spaces for prolonged periods of time,” said William Parham, a Loyola Marymount psychology professor and director of the National Basketball Players Association’s mental health and wellness program. “There’s no way around it, so I would anticipate some increased anxiety, some increased tension, some increased restlessness.”

There will be no fans at Disney. There also will be restrictions on where players can go, plus rules keeping families away until at least the second round of the playoffs. The hope is to significantly limit exposure to COVID-19 inside the bubble.

Even under normal circumstances, Holiday sees family time as a cherished respite. Life at Disney will clearly complicate that.

“This is one of the mental parts about it that guys have to adjust to, where someone like me, I go home and it’s where I kind of relax,” Holiday said. “I try my best not to bring my work home with me so I can hang out with my wife, my dog, and my daughter and I can do things like that. ... I think that’s going to be a little bit of a challenge, especially after like seven to 10 days.”

Likewise, Beal said living in the bubble will hardly be “a walk in the park.”

“We can’t just leave. We can’t just order whatever food we want. We can’t just do activities we want to do. We can’t go to our teammates’ rooms,” Beal said. “You’re restricted, and you can’t do the things that you’re normally used to doing.”

“Let’s not kid ourselves. This quarantine situation is going to be very difficult,” Griffin said. “We will work through mindfulness training with Jenna literally every day. ... It’s going to be about who can keep themselves in the best frame of mind, quite frankly.”

Mental health has been a priority for the NBA and the NBPA, especially after players like Cleveland’s Kevin Love and San Antonio’s DeMar DeRozan opened up about their inner struggles.

DeRozan knows it won’t be easy at Disney.

“It’s tough,” he said. “You’re taking guys who’ve been with their families every single day for the last few months and all of a sudden separating everybody into this one confined space and taking away a lot of joyful things that we do outside of basketball.”

Milwaukee forward Giannis Antetokounmpo, who has played for Greece’s national team, said being away for three weeks during international tournaments was challenging. This trip to Disney could last three months if the Bucks make the NBA Finals.

“Not being able to see your family, being there for three months, playing games with no fans, it’s going to be mental,” Antetokounmpo said. “You’ve got to push yourself through this.”

Daniel Medina, the Wizards' chief of athletic care and performance, said some players are concerned that an interrupted season might make them more prone to injury, which could be career-altering to players with expiring contracts. Some have decided not to play, notably Indiana’s Victor Oladipo.

Parham, who helped launch the NBPA’s mental health program in 2018, expects many players to handle the resumption well. He noted that after three months of relative isolation at home, they’ll be eager to satisfy their appetite for competition.

Still, the unprecedented nature of the bubble, born out of a pandemic blamed for about a half-million deaths worldwide, will present challenges. Another issue, Parham said, is how the restart coincides with the political and social upheaval spawned by the death of George Floyd, a Black man, while in police custody.

“Prior to COVID, and prior to these social justice demonstrations, there were sufficient daily distractions for people to not really even think about their stuff. They were just sort of on automatic pilot,” Parham said. “You know what they say: A person will never see their reflection in running water. It is only when the water is still that their reflected image begins to emerge.”