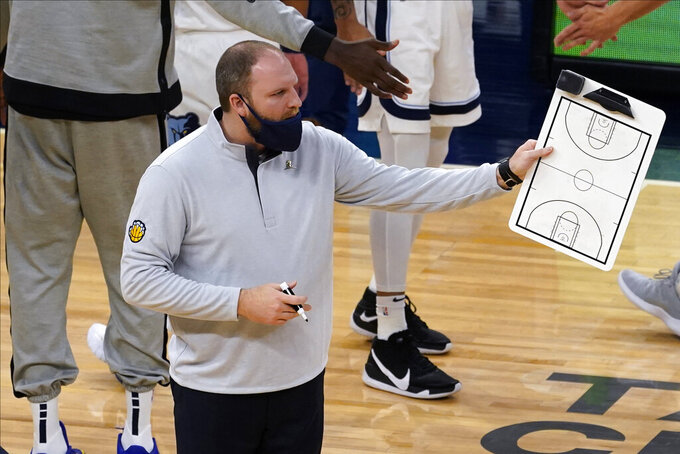 Memphis Grizzlies Taylor Jenkins holds the play board during a timeout in the first half of an NBA basketball game against the Minnesota Timberwolves, Wednesday, Jan. 13, 2021, in Minneapolis. (AP Photo/Jim Mone)

Washington got back on the practice court Wednesday for the first time in more than a week, and Bradley Beal wondered if the Wizards need more time there before returning to game mode.

The NBA apparently agreed with him.

Not long after the league's leading scorer said he believes the short-handed Wizards — who have six players who have tested positive for COVID-19 — may be following “a recipe for injury" if they played Milwaukee as scheduled Friday night, the NBA said that game would be postponed in a move that simply gives Washington more time to get game-ready again.

That move, along with the postponement of Wednesday's Memphis at Portland game, push the total to 17 games this season that have been pushed back because of the virus — those decisions coming on the same day the league revealed that 11 more players in the past week have tested positive for COVID-19.

The NBA said Washington's Friday game would be called off “due to the number of unavailable players for the Wizards, contact tracing for other players on their roster, and the length of time preceding the game during which the team was unable to practice."

The Wizards had eight bodies for their first practice in nine days Wednesday night, after which Beal sounded the alarm and said he hoped the NBA would allow the team time to get in some semblance of game shape before playing again.

“The health of us is the most important thing, and the safety of us, and that goes far beyond the virus," Beal said. “It's our physical health, too. ... It's unfair that other teams have been going and practicing and playing and having their constant rhythm. We haven't played in a week and some change. It's going to be tough on us. It's going to be real tough on us."

The earliest Washington will play now is Sunday in San Antonio — 13 days after the Wizards' most recent game. The latest postponement means the Wizards have had six games pushed back in the last two weeks.

Their Wednesday practice was mostly some 5-on-0 offense and shooting. Wizards coach Scott Brooks isn’t expecting any of the six players who have tested positive back in the next few days at least, and Russell Westbrook is still out with a leg injury.

“It’s definitely not an ideal situation,” Brooks said. “It’s great to be back, though.”

Contact tracing issues for the Grizzlies meant they would not have enough players eligible to play in Portland. Of the 17 postponements, 16 have come since Jan. 10 and the number could rise again soon — since Memphis is also scheduled to play in Portland on Friday.

By NBA rule, teams must have eight eligible players for games. The Wizards didn't expect to have more than eight available on Friday because of a combination of the virus and injuries.

Meanwhile, the league is hoping players do a better job being safe.

Starting with Wednesday’s games, in a memo obtained by The Associated Press, the NBA told teams to have their security officials “stationed near the half-court line during pre-game warmups and post-game to provide reminders to players and staff and encourage compliance” with the rules regarding interaction.

The NBA wants players to maintain six feet of distance as much as possible during pre-game warmups and post-game chats — a policy that has not been followed in many circumstances, even with the additional urging from the league about its importance.

Players, the NBA reminded Wednesday, may elbow-bump and fist-bump, but hugs and handshakes are not permitted. Players exchanging pleasantries after games are “strongly encouraged to wear facemasks during any such interactions,” the league said.

The league reminded players that speaking face-to-face while unmasked raises risks of transmission. The league has also said that should a player test positive after such an interaction, the other player could have to quarantine because of possible exposure.

The postponements involving Portland and Milwaukee push the total to 21 NBA teams that have had at least one game called off in the last two weeks. Memphis had its game at Minnesota last Friday called off after Timberwolves center Karl-Anthony Towns revealed that he tested positive for COVID-19.

Towns and Ricky Rubio were among the Timberwolves still sidelined by the league's virus protocols Wednesday for a game against Orlando. Dallas played with four players still out for the same reason. Miami played in Tampa, Florida against Toronto with Jimmy Butler and Avery Bradley out for a fifth consecutive game because of protocols — with the likelihood there being that they will each miss at least three more games, since they're not on the current Heat road trip. Boston is still without Jayson Tatum as well.

“It's important to always have a contingency plan," Dallas coach Rick Carlisle said, when asked what it's like coaching without knowing who will be available from one day to the next.

Postponed games, when possible, will be made up in the second half of the season.

Players who test positive must undergo a battery of exams before being cleared to return to play, such as cardiac tests. Those ruled out by contact tracing may return after a quarantine period, provided they continue to test negative for COVID-19.

“We don't have a blueprint for this," Brooks said.