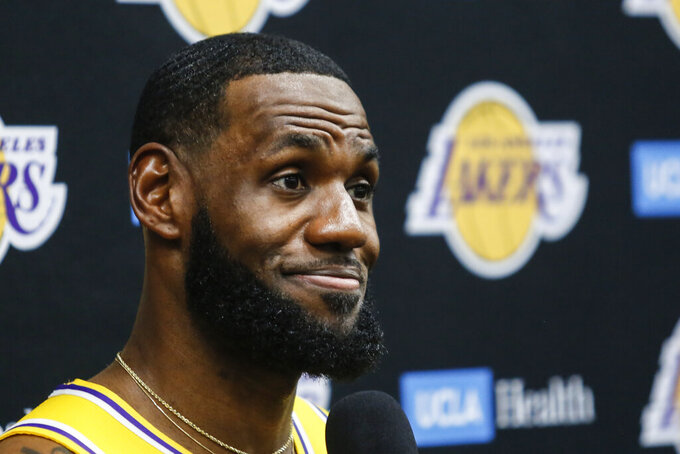 FILE - In this Sept. 27, 2019, file photo, Los Angeles Lakers forward LeBron James speaks during the NBA basketball team's media day in El Segundo, Calif. This season’s NBA MVP has won the award before. A trio of past winners of the award — reigning MVP Giannis Antetokounmpo of the Milwaukee Bucks, four-time MVP LeBron James of the Los Angeles Lakers and 2017-18 winner James Harden of the Houston Rockets — were announced Saturday, Aug. 8, 2020, as the finalists for this season’s top NBA individual honor. (AP Photo/Ringo H.W. Chiu, File)

A trio of past winners of the award — reigning MVP Giannis Antetokounmpo of the Milwaukee Bucks, four-time MVP LeBron James of the Los Angeles Lakers and 2017-18 winner James Harden of the Houston Rockets — were announced Saturday as the finalists for this season’s top NBA individual honor.

James would join Kareem Abdul-Jabbar (a six-time winner), Michael Jordan and Bill Russell as the NBA’s only five-time MVPs. Antetokounmpo is bidding to become the 12th back-to-back winner of the award, and Harden is vying for his second MVP in three seasons.

“He’s an incredible teammate, plays unselfishly, does everything,” Bucks coach Mike Budenholzer said of Antetokounmpo last month, stating his best player’s MVP case. “And I think that’s kind of what the MVP is, so we certainly feel like he’s very deserving and we’ll be excited to support him.”

Antetokounmpo is also a finalist for Defensive Player of the Year, while Utah’s Rudy Gobert is bidding to win that trophy for a third consecutive season.

The league announced the top three vote-getters in six individual categories. Voting has already taken place by a global panel of sportswriters and broadcasters.

The NBA has not set specific dates when the winners will be announced.

None of the games taking place at the NBA’s restart at Walt Disney World factored into the voting, because ballots were due before games began again July 30.

The league took the step of saying games played before the league suspended the season on March 11 because of the coronavirus pandemic could factor into award consideration, out of fairness to the eight teams that were not invited to the restart.

The other finalists for NBA honors:

Marc Gasol spent parts of 11 seasons in Memphis, going to three All-Star Games with a Grizzlies jersey on his back, earning two All-NBA selections there and a Defensive Player of the Year award as well.

And now, he’ll play against his former team for the first time.

The Grizzlies face Gasol and the Toronto Raptors on Sunday. It’ll be the first game between the clubs since Gasol was traded to Toronto in February 2019 — a move that helped the Raptors win last season’s NBA championship.

“I got there when I was 16 years old. It was my first time out of Spain,” said Gasol, who still owns his Memphis home. “I started high school there as a teenager and left as a father of two kids. ... My ties to the city and my roots go pretty deep and my love for the people there, what they mean and the franchise, it’s forever.”

Gasol helped Memphis make the playoffs in seven consecutive seasons including the 2013 run to the Western Conference finals. He is the Grizzlies’ all-time leader for minutes played, field goals made, free throws made and attempted, rebounds, blocks and triple-doubles and is second in points — 49 behind Mike Conley.

The Raptors were supposed to have played back-to-back games against Memphis this season, going there March 28 and then playing host to the Grizzlies March 30. Those games, of course, were called off because of the season suspension caused by the coronavirus pandemic.

“Obviously it’s a little bittersweet that we couldn’t play in the city of Memphis, to get that love and feel that Iove from the fans,” Raptors guard Fred VanVleet said. “But I’m sure he’ll be happy to see some familiar faces and a lot of the people that he spent a lot of time with over the years.”

On Friday, the Washington Wizards were eliminated from playoff contention.

On Saturday, they practiced.

The Wizards knew they were playoff longshots even before coming to the NBA’s restart at Disney, especially since Bradley Beal didn’t make the trip because of injury and Davis Bertans opted not to play because of health concerns.

But these eight games — Washington is 0-5 at Disney with three games left — were considered learning opportunities for the team’s young players, and a chance to get some high-level work in before the offseason starts. And just because the playoff chances are now gone doesn’t mean Wizards coach Scott Brooks is changing his thinking on that front.

“It’s about getting better,” Brooks said. “You know, I love our group. We want to keep improving. And the record, I’m not happy with it but I’m happy with our effort after every game that we’ve been in.”

Brooks has told his team repeatedly at Disney that the losses go on his record, not theirs.

The road to the NBA championship will go through Milwaukee's white uniforms.

The Bucks have secured the top overall seed in the NBA playoffs for the second consecutive year, the clincher coming when the Los Angeles Lakers lost to Indiana on Saturday.

Ordinarily, that would come with the right to host Game 1 and Game 7 of every series. This year, it just means that the Bucks will be called the home team in those games in each postseason round that they reach.