NBC wonders: where are the Olympic viewers this year? 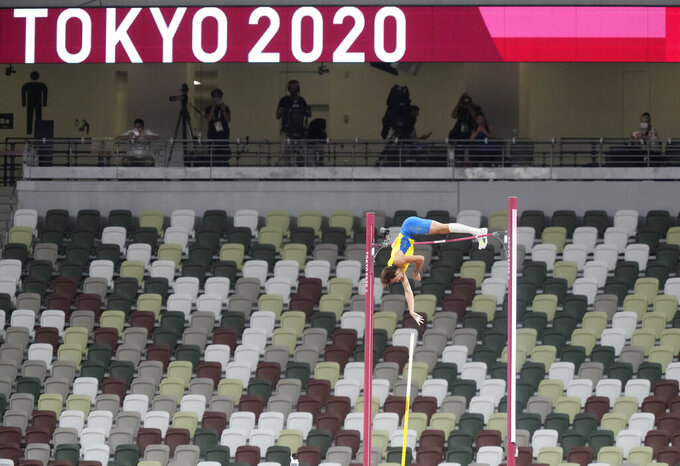 Armand Duplantis, of Sweden fails with the world record attempt after winning the gold in the final of the men's pole vault at the 2020 Summer Olympics, Tuesday, Aug. 3, 2021, in Tokyo. (AP Photo/Martin Meissner)

NEW YORK (AP) — For most nights at the Tokyo Olympics, NBC's prime time coverage is drawing about half the audience that the Games had in Rio de Janeiro five years ago.

The numbers are sobering: Sunday's NBC audience of 13 million was down 51% from the 26.7 million who watched the corresponding night in Rio. Saturday night was down 57%, last Wednesday down 53% and Tuesday down 58%, the Nielsen company said.

NBC's best night last week, when it reached 16.2 million on Thursday, was still down 43% from Rio, Nielsen said.

“We've had some bad luck,” NBC Universal chief executive Jeff Shell said last week. "There was a drumbeat of negativity ... and that has resulted in linear ratings being probably less than we expected.”

COVID restrictions that left largely empty arenas, the time difference with Japan and a lack of star power has played a part. Add in cable networks and streaming, and NBC Universal's position improves, but not by much.

The marked change in how people experience television in the past five years plays a part in the ratings decline. NBC's prime time had, on average, 35% less viewers this season than it had in 2015-16, Nielsen said.

One saving grace is NBC's dominance against its rivals. In fact, Fox last week averaged below 1 million viewers in prime time, believed to be the first time that's ever happened for one of the top four broadcast networks.

For the week of July 26 to Aug. 1, the top 20 shows in prime time, their networks and viewerships: