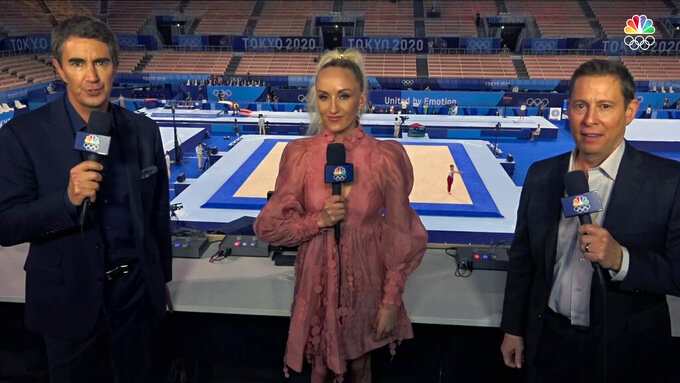 In this screengrab provided by NBC Sports, from left to right: Terry Gannon, Nastia Liukin and Tim Daggett call gymnastics for NBC Sports during the Tokyo Olympics, Monday, July 26, 2021. Gannon has become the voice of some of the most-watched sports at the Olympics. (NBC Sports via AP)

Terry Gannon has become the voice of some of the most-watched sports at the Olympics.

Gannon has called figure skating at two Winter Games and is doing gymnastics at a Summer Games for the first time this year after Al Trautwig had called the past five. Gannon has been calling gymnastics since 2018, when he was paired with 1984 gold medalist Tim Daggett and 2008 all-around champion Nastia Liukin.

“When this comes around, you feel the pressure and excitement when you sit down to call the action,” Gannon said. “I just feel lucky to have gotten to this point through many years of calling so many different sports and to be calling at this level is an honor.”

The Tokyo Olympics are Gannon's third Summer Games for NBC. He called rowing and canoeing in London in 2012 before switching to golf when it made its Olympic debut at Rio in 2016.

Gannon's Olympic breakthrough though came at Sochi in 2014 when he teamed up with Tara Lipinski and Johnny Weir to call figure skating on NBCSN's alternate feed. The trio was such a hit they were named the main network figure skating team later that year. Besides calling figure skating at Pyeongchang in 2018, they also hosted NBC's coverage of the closing ceremony.

Lipinski and Weir have both credited Gannon with their development as analysts.

“I’m grateful that starting out my career in broadcasting, he was the one by my side. I learned so much from him,” Lipinski said. “His experience, depth of knowledge, and the way he brings natural, genuine conversation into the booth makes his style so compelling.”

Weir added: “I’m proud of him covering the marquis sport at both the Summer and Winter Games. Gymnastics is in the best hands with Terry, but I admit I get jealous when there isn’t ice behind him for his on-cameras!”

Liukin, who is calling her second Olympics, also said Gannon has been instrumental in her growth as a commentator.

While Gannon has called the Olympic trials as well as national and world meets, he realizes the audience over the next two weeks will be bigger and broader. Much like Gannon might have to explain the difference between a triple lutz and salchow during figure skating, the same thing applies in gymnastics between a round-off and Amanar.

“You’ve got to be aware of explaining certain things at an Olympics that maybe you wouldn’t explain in a regular event where it’s a more limited audience or one more fervently into the sport you’re covering,” he said. “At an Olympics, you’ve not only got general sports fans that tune in every four years, you’ve also got non sports fans that tune into an Olympics because it’s the primetime show and it comes around so rarely.”

Gannon will call one of the most-watched events of the Olympics on Tuesday when Simone Biles and the U.S. women compete in the team finals. Gannon, who was on North Carolina State's 1983 NCAA basketball championship team, played against Michael Jordan and has had a front-row seat to many of Tiger Woods' victories in majors, but even he is amazed calling Biles' events.

“I’ve never seen a better athlete than Simone Biles. What she does is not only hard to describe or get across, you’re constantly trying to come up with greater adjectives than you used the last time. And you always feel like you’re falling somewhat short, because she surpasses them,” Gannon said. “With how great Tiger Woods is, he’s always challenged by the venue. And basketball is a team sport so with LeBron James or Michael, you’re always challenged by the team you’re competing against. Simone Biles is really competing against herself or only potential out there, which seems limitless.”