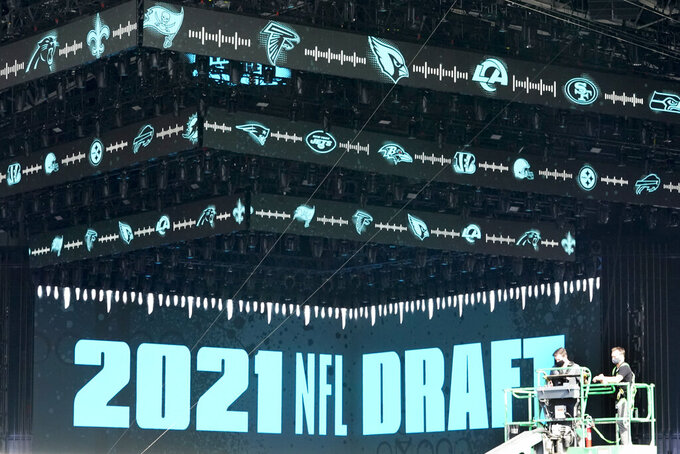 Workers continue preparing the NFL Draft Theatre for the 2021 NFL Draft, Tuesday, April 27, 2021, in Cleveland. After going all virtual in 2020 due to the COVID-19 pandemic, the three-day draft, which has grown into one of America's biggest, non-game sporting events, returns with thousands of fans who will be separated by their loyalties, and whether they've been vaccinated. (AP Photo/Tony Dejak)

That's not exactly the slogan for the NFL draft being staged Thursday through Saturday in Cleveland.

It's more at the top of the league's wish list as it allows some prospects and fans to attend the festivities — yes, there are those going on by the shores of Lake Erie.

Sure, the draft is the NFL's most popular event other than the Super Bowl and opening day. And it being held virtually in 2020 because of the COVID-19 pandemic was a most emphatic sign that very little would be normal for pro football last year.

Yes, that draft was a big hit thanks to Commissioner Roger's Goodell's “come join me” hosting from his man cave, and the honest, unstaged reactions by so many players when they were selected.

And the NFL is incorporating some of that into this year's proceedings, though Goodell will be on hand in Cleveland to hug or fist-bump the dozen or so prospects in attendance.

Still, the key here for the league is that, just as last season was completed on time, and the Super Bowl — albeit scaled down from a mega-event — was held on schedule, this draft will be as close as currently possible to the real thing.

“We have to do this,” says Jon Barker, NFL head of live event productions. “We need to get people out and back to live events and to experience things like this, and the draft is one of those great events that can bring everybody together and do that.”

Another sign of business as usual is many, perhaps all the clubs, will be back at their facilities to conduct the selections. There are requirements and coronavirus protocols in place, of course.

“Yeah, I think for our draft night, obviously, we’re going to be back in the building, which is a good thing,” says Jets general manager Joe Douglas, who has the second overall spot and is expected to take BYU quarterback Zach Wilson after the Jaguars open up by grabbing Clemson QB Trevor Lawrence.

Also somewhat routine will be the laser focus on one position: quarterback, naturally.

The top three selections figure to be Lawrence, Wilson and either Ohio State's Justin Fields, Alabama's Mac Jones or Trey Lance of FCS powerhouse North Dakota State to San Francisco. The two not selected by the 49ers almost certainly will go in the top 15, with a potentially wild scramble by QB-lacking clubs seeking to trade up.

“You’ve got to take risks. This is a risk we were willing to take,” Niners coach Kyle Shanahan says of the massive cost of moving up to the third spot. San Francisco sent three first-round picks and a third-rounder to move up to Miami's position.

“We looked at how our four years have gone. We looked at how we want the next four years to go and we’ll look to where we’re at in the draft and the options that are there. ... We felt pretty strongly we were going to get left at the altar sitting there at 12.”

Left out for the opening round are the Texans, Rams, Seahawks and Chiefs. Fortunately for all four they aren't in the quarterbacks market.

Selecting twice because of deals with those teams will be Miami (sixth and 18th); Jacksonville (first and 25th); the Jets (second and 23rd); and Baltimore (27th and 31st).

The NFL planned to have 13 prospects on hand, but Virginia Tech cornerback Caleb Farley tested positive for COVID-19 and won't attend according to his agent Drew Rosenhaus.

Wide receiver, for the second successive year, is the strength of this crop, with three possibly going in the top 10: Heisman Trophy winner DeVonta Smith and teammate Jaylen Waddle of national champion Alabama, and Ja'Marr Chase of LSU.

Chase opted out of the 2020 college season, and is one of several players projected to be selected early despite their layoffs. Not too many teams are fearful of grabbing the opt outs.

“You’re projecting, it’s probably a bigger projection than when you studied a guy that’s played three years of college football,” says Duke Tobin, director of player personnel for the Bengals.

“That’s our job, to project them into our league into our system and scheme and into our division and what we do. It’s a year like no other.”