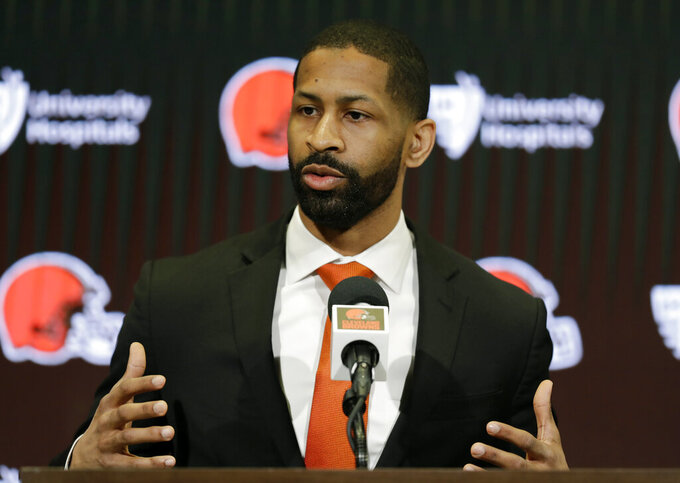 FILE - In this Feb. 5, 2020, file photo, Cleveland Browns general manager Andrew Berry speaks during a news conference at the NFL football team's training camp facility in Berea, Ohio. The NFL's salary cap will be $182.5 million per team in the upcoming season, a drop of 8% from 2020. “If you look league-wide at the available cap dollars, it is like 40 percent of what it has been in the past,” Andrew Berry, Cleveland's executive vice president of football operations, said last week. (AP Photo/Tony Dejak, File)

Like Lamar Jackson under pressure from the pass rush, let the scrambling begin.

The NFL's salary cap will be $182.5 million per team in the upcoming season, a drop of 8% from 2020. The league's loss of revenues due to the coronavirus pandemic caused the first decrease in the cap since 2011, which followed an uncapped season.

The NFL is close to agreement on extensions of its broadcast contracts, but those deals will not affect the 2021 season. At least the current cap is $2.5 million higher than projected last month. Last summer, the players’ union and league agreed to a cap minimum of $175 million, but that number jumped by $5 million in February and was set at $182.5 million on Wednesday.

“My stepson asked me this morning, ‘Hey, is that extra $2.5 million going to help you?’" Rams general manager Les Snead said. "I’m like, ‘No, I don’t think 2.5 is really going to help us.’ If you look at where we are and look at how much we’re over, 2.5 is probably a little bit of a drop in the bucket.

“Today’s news, the extra $2.5 million, isn’t necessarily going to move the needle with us, but it is very, very helpful now to know that it’s not going to be 188, per se. That would have been a little more breathing room. So to know now, we know what the finish line is. We’ve been running a marathon, and we didn’t know whether we were going to run 25 miles, 24, 26 or 28. At least now we know it’s 26.2.”

The Eagles were over by about $35 million and the Saints by $33 million.

On the other side of the ledger, the Jets, Patriots and Jaguars had the most money available, ranging from $65 million to $67 million.

“I would say, obviously, we’re better positioned than we were this time last year,” Jets general manager Joe Douglas said of free agency. “I would say that our philosophy and stance has not changed however. I think our goal and our plan is to be ... a team that really builds this through the draft and hitting on draft picks, obviously using free agency to supplement our roster. If the opportunity and the value meet, that’s going to be the point where we’re going to be aggressive and get someone that we feel good about, helping this team not only on the field, but with the culture and inside the building.”

The rest of the free agency crop will be seeking big bucks from a diminished pot.

“If you look league-wide at the available cap dollars, it is like 40% of what it has been in the past,” Andrew Berry, Cleveland's executive vice president of football operations, said last week. “Look, a year ago at this time, generally speaking, I think everybody across the league thought the cap would be around $210 (million). We were likely $30 million dollars north of that. That means everybody across the league is going to feel that squeeze. We are not excluded from feeling that effect.”

Panthers coach Matt Rhule notes that all 32 teams had months to get ready for the reduced cap and its implications. But the 2020 free agency moves were made under normal operating conditions. Now? Not even close.

“We have been preparing for this, but even going back to last offseason the decisions that you have made and even decisions the last two offseasons when you set some of these contracts, everyone across the league did it thinking the salary cap would be $210 million or $205 million, or something like that," he said. "It’s a reduction from last year but also a reduction on how you were planning. That is what is making people make really tough decisions. We have known for a while and have had to plan accordingly.”

Washington coach Ron Rivera doesn't look at the available crop from other clubs so much as what his team could lose. Of course, Washington is roughly $39 million under the number.

“I see it as an opportunity,” he said. “But the thing that everybody seems to forget is you’ve got to sign your own guys. You may have a tremendous amount of cap room, but who don’t you have back on the roster? That’s the thing everybody has to understand. We’ve got to take a look at our guys first, and then we have to go see what we can do and where we can get the next best player available.”