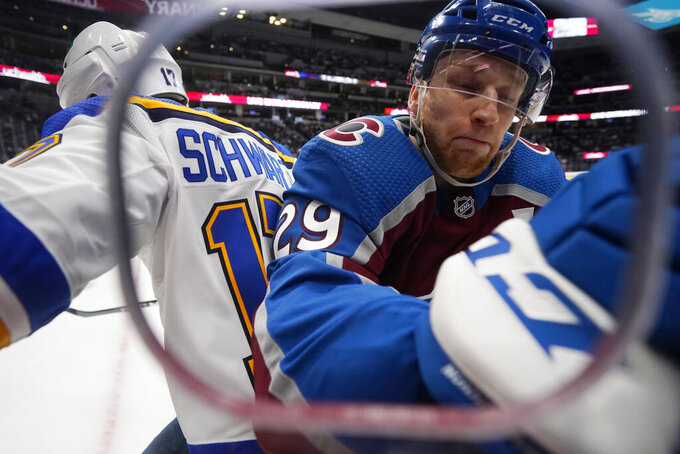 DENVER (AP) — Game on for the St. Louis Blues and Colorado Avalanche after a coronavirus testing scare.

The NHL said it had investigated multiple positive COVID-19 test results from the Blues and Vegas Golden Knights from the same laboratory. The league said the results had “peculiarities and similarities” and found them to be testing errors.

The league said further testing came back “uniformly negative" and all affected players who were initially isolated out of caution and retested were eligible to play.

The announcement came only hours before Game 2 between St. Louis and Colorado in Denver on Wednesday night. Vegas plays Game 3 at Minnesota on Thursday night with that first-round series knotted at 1-1.

St. Louis is the only one of the 16 playoff teams with any players on the NHL's COVID-19 protocol list.

Leading scorer David Perron, defenseman Jake Walman and forward Nathan Walker have been on the list since last week. All three remain on the list and were out for Game 2; Perron did not travel with the team for the first two games of the best-of-seven series against the Avalanche.

The Blues recently confirmed that Walman, who’s fully vaccinated, had tested positive for the virus after undergoing additional tests and was put in quarantine. Blues forward Zach Sanford was on the protocol list March 20-21 before further testing revealed a false positive.

The NHL began relaxing virus protocols last week for any team that had 85% or more of its traveling party fully vaccinated. The defending Stanley Cup champion Tampa Bay Lightning was the only team to confirm it has reached that threshold.

Washington center Evgeny Kuznetsov and goaltender Ilya Samsonov returned for Game 3 against Boston on Wednesday night after being unavailable from May 4-15 because of virus protocols. Despite coach Peter Laviolette saying “both these guys (are) just coming out of a long layoff,” Samsonov made his first start since May 1 because Game 2 goalie Craig Anderson was ruled out.

A total of 51 regular-season NHL games were postponed for virus-related reasons. Those postponements pushed back the original May 8 end date for the regular season, which didn't wrap up until Wednesday afternoon as Calgary and Vancouver played out the string of their delayed schedules against each other.

The Blues, who won the Cup for the first time in franchise history in 2019, went into the playoff bubble last summer as a top contender and lost in the first round. Armstrong said roughly 20% of players had COVID-19 before the 2019-20 season resumed.