No. 9 Miami at No. 20 North Carolina headline ACC weekend 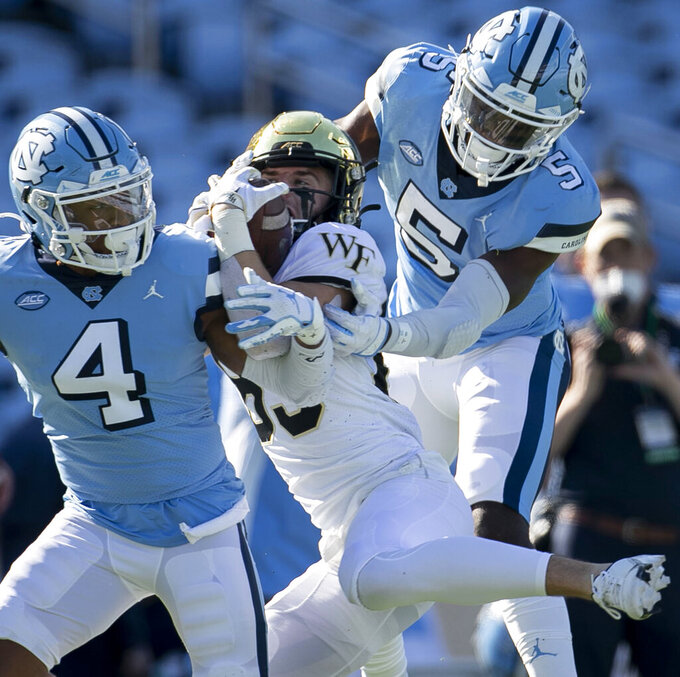 Here are things to watch in the Atlantic Coast Conference in Week 14:

No. 9 Miami at No. 20 North Carolina. The Hurricanes (8-1, 7-1 ACC; No. 10 CFP) fell out of the league's championship chase when Clemson beat Virginia Tech last week. Still, Miami's got plenty on the line starting with a potential home-town bowl game at the Orange Bowl to finish the season. Should Clemson win the rematch with Notre Dame in the ACC title game on Dec. 19, it would likely mean two ACC schools in College Football Playoff — and clear the way for Miami to take the league's slot in the Orange Bowl, a lucrative and prestigious New Year's Six game. The Hurricanes are looking for their sixth straight win since their lone loss to Clemson on Oct. 10. The Tar Heels (7-3, 6-3; No. 17 CFP) are also looking to improve their postseason credentials and close the regular season with two straight victories.

Virginia (5-4, 4-4) at Virginia Tech (4-6, 4-5) with the state rivals going in opposite directions. The Cavaliers behind quarterback Brennan Armstrong have won four in row and are coming off a 43-32 victory over Boston College last week. Virginia snapped Tech's 15-game win streak in the series last year with a 39-30 victory. The Hokies have lost four straight this season and were outscored 92-24 in consecutive defeats to Pitt and Clemson the past two weeks. This game, typically closing the regular season on Thanksgiving weekend, was originally scheduled for Sept. 19, but postponed until December due to COVID-19 concerns.

Count on plenty of scoring when Wake Forest plays at Louisville on Saturday. The winning team has scored at least 42 points in the past four matchups with the last two meetings really lighting up the scoreboard. The Demon Deacons (4-3, 3-3) won 56-35 at Louisville in 2018 while piling up 591 yards of offense n 2018. The Cardinals (3-7, 2-7) won a 62-59 shootout last year at Wake Forest, the combined 121 points were the second-most in ACC history.

Florida State (2-6, 1-6) will play its first game in four weeks when it faces Duke (2-7, 1-7) at home on Saturday after the Seminoles past three games were all postponed due to COVID-19 concerns. Florida State last played on Nov. 14, losing to North Carolina State 38-22. Then the Seminoles had contests against Clemson, Virginia and the Blue Devils called off the past three weeks. “Hopefully, we can roll through and actually play one here on Saturday,” Seminoles first-year coach Mike Norvell said. “Definitely excited to get back out there.” Duke has lost all 20 games to Florida State in the series, which started when the Seminoles joined the ACC in 1992.

Wake Forest quarterback Sam Hartman has not thrown an interception in 234 passing attempts, the third longest current streak in the nation and the longest in the ACC at the moment. Hartman is the latest league passer to go on a long, pick-free streak. Clemson's Trevor Lawrence went 366 attempts between interceptions, a run that ended at Georgia Tech in October. Notre Dame's Ian Book saw his stretch of 266 attempts without an interception end last week at Syracuse.