No fans at Riviera, no amateurs in Palm Springs for PGA Tour 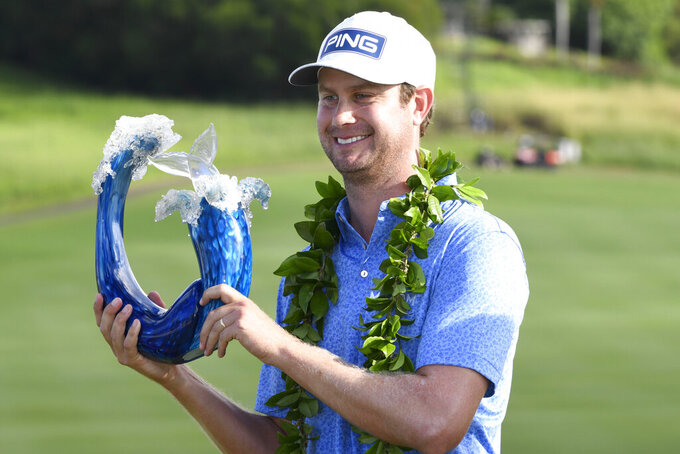 Harris English holds the champions trophy after the final round of the Tournament of Champions golf event, Sunday, Jan. 10, 2021, at Kapalua Plantation Course in Kapalua, Hawaii. (Matthew Thayer/The Maui News via AP)

HONOLULU (AP) — No fans in Los Angeles. No amateurs in Palm Springs. Those were the latest announcements on PGA Tour stops in California as golf heads back to the mainland next week.

The Genesis Invitational at Riviera on Feb. 18-21 was predictable. COVID-19 cases are raging in the state with the nation's largest population. California's death toll reached 30,000 on Monday.

“Throughout our extensive planning, it became clear that due to the pandemic the best way to ensure the safety for all involved is to hold the tournament without spectators,” tournament director Mike Antolini said Tuesday.

The first stop is next week in the California desert for The American Express, typically played over three courses and one of two tournaments that feature amateurs during the competition. The other is the AT&T Pebble Beach Pro-Am.

It now will be played on two courses at PGA West (Stadium Course and Nicklaus Tournament Course). The pro-am format for 54 holes, a part of the tournament since it began in 1960, has been eliminated. It's expected to return next year. There will be a Wednesday pro-am at The American Express, typical of regular events since last fall.

Even so, there are signs of improvement.

The Farmers Insurance Open at Torrey Pines follows The American Express and will not have fans. Then it's over to the Phoenix Open, which is planning for roughly 8,000 people a day — it usually draws in the neighborhood of 600,000 fans for the week — and a single-story structure around the usually rowdy 16th hole.

Pebble Beach will have no fans but stick to its fabled amateur format, a blend of entertainers, Fortune 500 executives and athletes. Pebble at least as a small idea what to expect from having hosted a PGA Tour Champions event last fall.

John said Pebble Beach was adding vans to shuttle players, caddies and tournament personnel to the three courses used in the rotation. He said the hard part was telling longtime volunteers — they come from all over the country for a week on the Monterey Peninsula — that their services are not needed.

The four tournament directors for the West Coast Swing stay in touch because they have a lot in common.

“We talk about what we're doing. Everyone is in the same boat, with limited access to the golf course,” John said.

The PGA Tour is working on plans for the World Golf Championship in Mexico City, which is not likely to be held this year without any fans allowed. And then it's off to Florida and Texas in the five weeks leading to the Masters.

The Players Championship is planning for limited fans, though details are still in flux.

The Honda Classic, held after The Players this year, says it will have limited fans, but there will be room for them around the closing stretch and on the 18th green.

“We are the first really big tour to come out here and do this stuff, so I think we still need to watch ourselves on what we do and where we’re going to be going,” PGA champion Collin Morikawa said. “But for the most part, you know, slowly to start seeing fans, it’s going to be really exciting.”

Lee Westwood once played 16 consecutive weeks on the European Tour, not stopping until he broke through with his first victory in the Volvo Scandinavian Masters. Was the idea to keep playing until he won? No.

It's that kind of approach that Charles Howell III suggests young players take. The topic was sponsor exemptions for players fresh out of college who are trying to get PGA Tour cards. The idea behind an exemption is to do a favor to a young player now with hopes that when they make it big, they'll return to the tournament as stars.

But when a player wins, and his schedule changes, that can be difficult.

“A lot of the young guys now, they are ready to win sooner," Howell said. “It's really tough for them to balance the schedule, because as soon as you win, you're in everything.”

Howell didn't win right away, but he did well enough on sponsor exemptions that he didn't have to go Q-school. Then again, he was someone who always played a big schedule.

“Looking back, I would encourage them to play a lot of golf,” Howell said. “You don’t have the obligation of a family. You don’t have kids. You don’t have a school schedule that you’re dealing with, you’re not booking a father-daughter dance and this and that. So while you’re young, my advice is play a lot. It’s what you do.”

END OF A DROUGHT

Harris English is part of a curious trend this season on the PGA Tour. He is the fifth player to have gone at least six years since his last tour victory.

English won in November 2013 and then won a playoff Sunday at Kapalua in the Sentry Tournament of Champions.

“You definitely have some inspiration out here from guys,” English said.

Stewart Cink started it off by winning the Safeway Open, his first victory since the 2009 British Open at Turnberry.

Martin Laird won in Las Vegas, his first title since the Texas Open in 2013. Brian Gay won the Bermuda Championship after having not won since the Humana Challenge in 2013. And then Robert Streb won at Sea Island for the second time. He won his other PGA Tour event at Sea Island in 2014.

The difference? English was No. 29 in the world when he finally broke through again. The other players were all outside the top 300 in the world ranking.

The USGA is moving up the U.S. Senior Women’s Open by three weeks, another change in women’s golf to avoid competing events.

The Senior Women’s Open, canceled last year because of the pandemic, was originally scheduled for Aug. 19-22 at Brooklawn Country Club in Fairfield, Connecticut. That’s the same week as the Women’s British Open at Carnoustie. Laura Davies, who won the inaugural U.S. Senior Women’s Open, typically plays in the Women’s British Open, along with a few others eligible for both events.

“After listening to player feedback and consulting with our new broadcast partner (Golf Channel), it was clear that separating the dates from the week of the AIG Women’s Open was important to the overall success of the championship,” said John Bodenhamer, the senior director in charge of USGA championships.

It was the second time in the last six months that golf organizations showed a willingness to adjust schedules. The Curtis Cup was originally to be held Sept. 3-5 in Wales until the R&A realized that was the same weekend as the Solheim Cup, and amateurs might have to choose between the Curtis Cup and Junior Solheim Cup. The Curtis Cup moved to Aug. 26-28.

Justin Thomas last year shot 278 and won at Kapalua in a playoff. Without the wind, and the soft turf from overnight rain, he shot 268 this year and missed a playoff by one shot. ... Every winner of the Sony Open since 2010 has finished among the top 10 in the key putting statistic. ... Webb Simpson has shot 63 or better 18 times since 2009, the most of any player on the PGA Tour.

Sergio Garcia made birdie or better on all but one of the par 5s he played at Kapalua. He was 17 under on the par 5s and finished 18 under for the tournament in a tie for 11th.

“You’re trying to get on the other side of your lull and one bad shot is like, ‘Here we go again, I’m back in the same spot, I’m not getting any better.’ It's really tough to get out of it.” — Harris English, who ended more than seven years without a victory at Kapalua.