No instant testing for toxic ski waxes at the Olympics 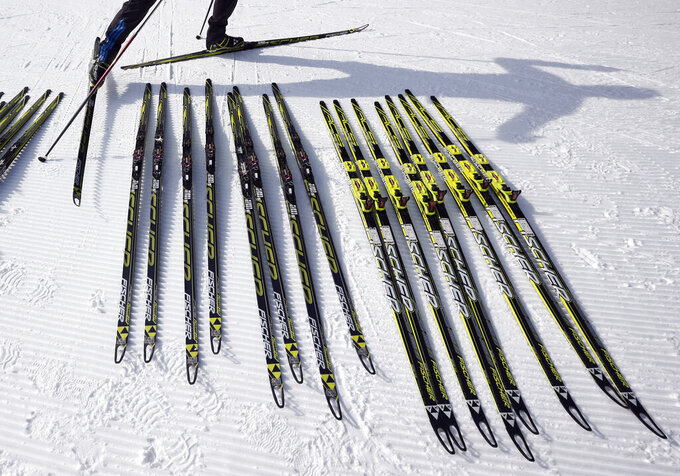 FILE - A Ukrainian skier heads out on the course to test skis for wax and snow conditions prior to the relay competition at the World Cup Biathlon, Saturday, Feb. 13, 2016, in Presque Isle, Maine. The on-again, off-again ban on high-end waxes that help cross country skis glide smoothly over the snow, but are toxic to your health and the environment, is on in some places, but not the cross country ski World Cup circuit or 2022 Beijing Olympics because the tester isn't ready. (AP Photo/Robert F. Bukaty, File) 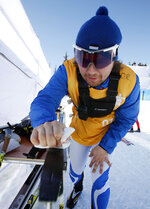 The on-again, off-again ban on high-end but toxic waxes that help cross country skis glide smoothly over the snow is on in some places — but not the World Cup circuit or 2022 Beijing Olympics.

“It was supposed to be in effect this season,” said U.S. Ski & Snowboard cross county director Chris Grover. “But unfortunately, the technology that would give us on-the-spot testing at the beginning of races to make sure that people didn’t have fluorocarbons on their skis, the testing just hasn’t worked so far."

Since cross country skiing officials don't have a testing device, they're not able to police the field to make sure everyone is playing fairly, he said. Biathlon doesn't have a test either, so organizers require teams to sign a form saying they won't use it and face a fine if they're caught.

Prepping the base of a cross country ski is critical to ensuring that it encounters the least amount of resistance as the racer moves over the snow. Friction makes the skis slower and forces the athlete to work harder as they glide over the flats, climb hills and speed down the other side.

Ski waxing is a science and an art.

Before a race, teams of technicians iron on, scrape and smooth layers of special waxes onto skis. They pick the wax that best suits the day's weather conditions, snow and air temperature, type of snow, style of course. Races have been won and lost based on ski prep. It's common for racers to thank their wax techs after a medal-winning finish — it's that important.

The expensive fluorocarbon waxes became critical to a racer's success.

“The Nordic disciplines, in particular, are a place where after three decades of using fluorocarbons, we really rely on them,” Grover said. “And there’s no product that really comes close to creating the ski speed that the fluorine does.”

Sturdier waxes that last longer despite the incredible friction were highly valued and the composition of waxes is largely a secret known only to the chemists at the wax makers. The problem, according to researchers, was that the fluorocarbons involved are dangerous, part of the PFAS often called “forever chemicals."

After it was discovered that fluorocarbon wax is toxic, the sport has been trying to move away from it.

Four years ago, European Union countries, the governing bodies of the sports and ski wax companies entered into an agreement that identified toxins found in ski racing waxes and established tolerable levels of these toxins, said Ian Harvey, a representative for Toko USA, which is owned by Norwegian ski products company Swix.

The groups agreed that starting in 2020, all ski waxes would adhere to the new standard, which includes reducing or eliminating C8 fluorine in ski waxes, he said.

But that won't be easy.

“If you want to know the truth though, this pact is on what it being manufactured,” Harvey said. “The teams have plenty of old-technology waxes around still, and use it in many cases.”

And since the fluorine tracker is still being developed and refined, those waxes can't be detected on the spot. It can only be confirmed at a lab and that takes time. With so much riding on the big events, an instant test must be accurate.

The Fédération Internationale de Ski announced in June that it would prohibit products containing C8 fluorocarbons because of their health risk and impacts on the environment, but it said it was postponing implementation of the on-site testing until the device is reliable.

The device will be further tested during the next winter season, without penalties involved, FIS said.

The International Biathlon Union also said it was prohibiting "possessing, applying, using, selling, giving-out or trading any products with C8 fluorocarbons." But since a testing device is not available, they require all national federations and wax companies to sign a declaration stating they will follow the regulations.

“Moreover, the IBU plans to perform analyses of materials produced for, or used in, the preparation of skis to confirm compliance with the IBU rules,” the union said. “This includes spot checks of materials in use by teams or ski wax companies and individuals at IBU events.”

Two countries, Moldova and Lithuania, were sanctioned in January for violating those rules. The IBU fined each “several thousand Euros” and warned of a higher penalty for another violation. A third violation would see the federation banned from the next IBU event.

Although the fluorocarbon waxes are still the gold standard for fast skiing, Toko's Harvey says the new fluorine-free waxes are "about on par in terms of performance as the old C8 chain fluorine waxes.

“The only area where the C8 chain fluorine waxes are faster is in very wet snow and longer events,” he said. “Fluorine-free technology has exceeded or equaled fluorinated performance in all other conditions. Conditions in China are expected to be pretty cold and dry.”