Norwegians have long memories and high hopes at Olympics 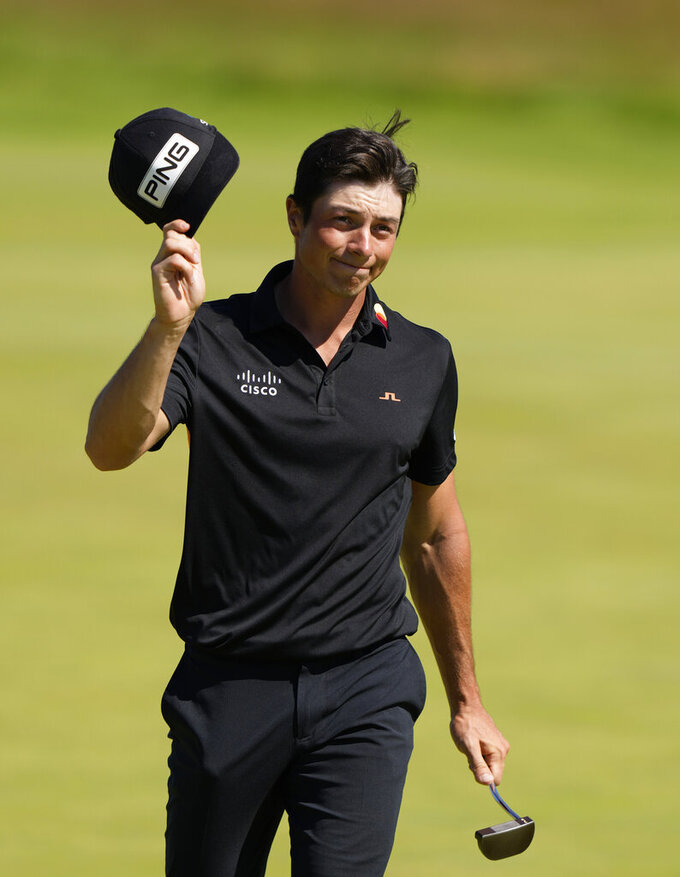 KAWAGOE, Japan (AP) — Viktor Hovland and Kristian Johannessen have a relationship that dates to when they were in high school in Norway, and here they are in Tokyo to play in the Olympics for the first time.

Longtime friends? Hard to say. It sounded as though they were enemies first.

“I feel like our relationship has gotten better every year, even though we started out hating each other,” Hovland said with a laugh. “It’s getting better, still a work in progress.”

Johannessen said he has known Hovland since he was about 13 or 14. “He came up like a fat little kid and started to play really well,” he said.

Hovland is so cheerful it can be difficult to tell when he’s joking. Johannessen was asked later about hating on Hovland and he replied, “I think it was the other way around.”

Hovland took it from there.

Hovland said he was invited to a tournament at a high school he wanted to attend. Everyone stayed in a large house, and Hovland was in a room with a good friend. Trouble was, his buddy had his girlfriend over all the time.

“I was young at the time and I might have complained a lot about that,” Hovland said.

Apparently, Johannessen had heard enough of the complaining. So he asked Hovland what his scores were from two rounds of the tournament they were playing.

“I just said, ‘Well, I shot 82-82.’ And he was like, ‘Well, does it matter if you’re sleeping if you're shooting 82-82?' Never met the guy and I'm like, ‘All right, we’re off to a good start,” Hovland said. “And I was thinking when I start at this school in a couple years, we're probably going to butt heads a lot. But yeah, despite the nasty comments, he's actually a pretty decent guy.”

They took different paths from high school. Johannessen had an offer to play at Tennessee but decided to turn pro. He has three wins in the Nordic Golf League and now plays the Challenge Tour in Europe. He is No. 297 in the world.

Hovland went to America to play at Oklahoma State, won the U.S. Amateur and already has three wins on the PGA Tour and European Tour and is No. 11 in the world.

They are playing for the Norwegian flag this week with big hopes and long memories.

Patrick Reed faced some big obstacles to get to Tokyo in time as the alternate in the Olympics to replace Bryson DeChambeau, who withdrew with a positive COVID-19 test.

He needs three tests 24 hours apart, and began the process early with one on Saturday evening. He left the 3M Open in Minnesota for home in Houston for a second test, and then his third test would be Monday evening. He was to fly out Tuesday.

That’s just the start. His flight would not arrive until Wednesday afternoon, and with more testing, he won’t see Kasumigaseki Country Club until the opening round.

But that’s nothing new.

His coach, his wife and those close to him reminded him of how he started. Reed went through Monday qualifiers before he had his PGA Tour card, often playing a course without seeing it. So why should this be any different?

He said he was 6-for-6 making it through Monday qualifiers without seeing the course, and he missed both times he had played a practice round.

“These days with how good yardage books are and with how much we have to kind of figure things out on the fly as it is, I expect to go in there and play well and be able to manage the golf course and hit the golf shots,” he said.

As for the jet lag?

Rory McIlroy planned to play the Irish Open, take a week off with his family, and then head to the British Open. But when UK quarantine laws made it difficult for his family to travel, he added the Scottish Open. And there might have been another reason.

McIlroy doesn’t know if he’ll be playing the BMW PGA Championship, the flagship event of the European Tour, on Sept. 9-12.

That’s one week after the Tour Championship in Atlanta, and two weeks before the Ryder Cup in Wisconsin.

“I added the Scottish in the off chance I might not play Wentworth,” McIlroy said before leaving the British Open. “It’s just a lot of golf coming up. To go straight from the Tour Championship straight to Wentworth might be too much, especially with the Ryder Cup.

“It might be best to just rest for a couple of weeks before heading up there, but that’s still up in the air,” he said. “That could all change.”

Cameron Smith still has the mullet that has been growing out of control all year. But the hair is shorter — much shorter — on the side of his head.

The Australia had “AUS” shaved ahead of the Olympics.

“I mean, it’s the Olympics. It doesn’t happen too often,” Smith said. “I thought I would give Australia a shoutout on the side of the melon. I thought about it for a few weeks beforehand and then I just said, ‘Stuff it, I’m going to do it.’ And I think it’s been received pretty good.”

It apparently made the news in Australia, for his mother got in touch with him.

“She was like, ‘Oh, you were just on the news.’ Called me all sorts of names, but she loved it and she loves that it ... puts a smile on people’s faces.”

Every shot counts in the FedEx Cup on the PGA Tour, and it really counts as the regular season nears the end. That much was evident in the 3M Open.

Start with Cameron Champ, who was at No. 142 in the standings with three weeks left. His victory moved him up to No. 49.

Keith Mitchell, coming off five straight missed cuts, finished fifth and moved off the fringe of trouble at No. 114 up to No. 93.

Adam Scott didn't play and fell 10 spots to No. 123. Scott at least is in the World Golf Championship next week because he's among the top 50 in the world.

The Nedbank Golf Challenge in South Africa has been canceled for the second straight year because of the COVID-19 pandemic. The tournament will be celebrating its 40th anniversary the next time it is played. ... Ian Poulter moved up one spot in the world ranking to No. 50, assuring him a spot in the World Golf Championship next week. ... Based on the current women's world ranking, Jeongeun Lee6 of South Korea (No. 14) is the only player from the top 15 in the world who is not in the Olympics next week.

Twelve different players have won the past 12 majors on the LPGA Tour.

“When you tell somebody you won a gold medal, they know exactly what you’re talking about. So I think a gold medal would be huge for the people that don’t know much about golf.” — Abraham Ancer of Mexico on the reaction of winning a major or winning the Olympics.