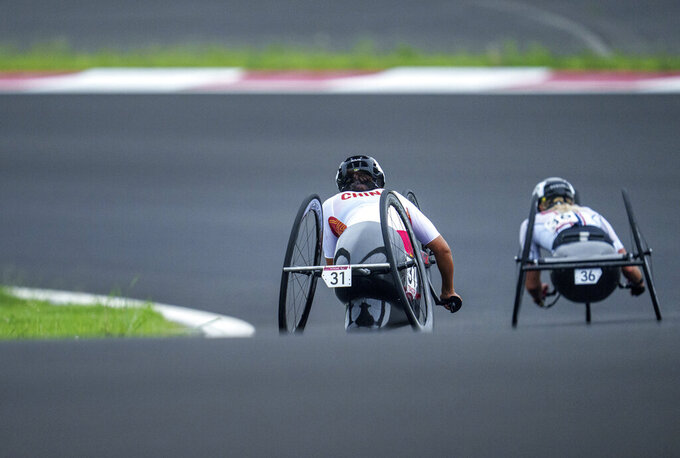 Bianbian Sun of China is behind Oksana Masters of the U.S. in the women's H5 road cycling race at the Tokyo 2020 Paralympic Games in Oyama, Shizuoka prefecture, Japan, Wednesday, Sept. 1, 2021. (Thomas Lovelock for OIS via AP)

TOKYO (AP) — Oksana Masters won her second gold medal of the Tokyo Paralympics on Wednesday, bringing her career total to four gold and 10 medals overall in both summer and winter events.

The American won the women's hand-cycle road race to go with a victory on Tuesday in the time trial. She could win one more gold in Tokyo in the relay event on Thursday.

But she said once the race started it was a different matter.

“I did not trust myself, but the minute that clock went off and the whistle went off, I just let me body go on auto-pilot.”

Masters began her Paralympic career in 2012 in London with a bronze medal in rowing.

She has had equal success in winter events. She won two gold medals in skiing at the 2018 Pyeongchang Paralympics. She added two more silver medals and a bronze in Pyeongchang. In Sochi in 2014, she picked up a silver and a bronze.

Masters was born in 1989 near Chernobyl, site of the world's worst nuclear accident, and has birth defects believed to be from the aftermath of the disaster.

She was adopted by an American mother when she was a child. She had her left leg amputated near the knee at 9 and the right one at the same spot five years later.

She recently partnered with a deodorant brand as part of a campaign called “Watch Me,” which encourages young girls to stay in sports with resources and support. There were murals placed in New York, Philadelphia and Atlanta that feature Ashleigh Johnson (water polo), Chiney Ogwumike (WNBA), Chelsea Wolfe (BMX), Alex Morgan (women’s soccer) and Masters.

“There’s so much power when you’re able to have something that you can look at and see and be like, ‘OK, it’s here. It’s doable,’” Masters said in a recent interview with The Associated Press. “I’ve always been about seeing is believing, and when you can see something, you can be it and achieve it.”