Olympian moved to village after tearful video in isolation 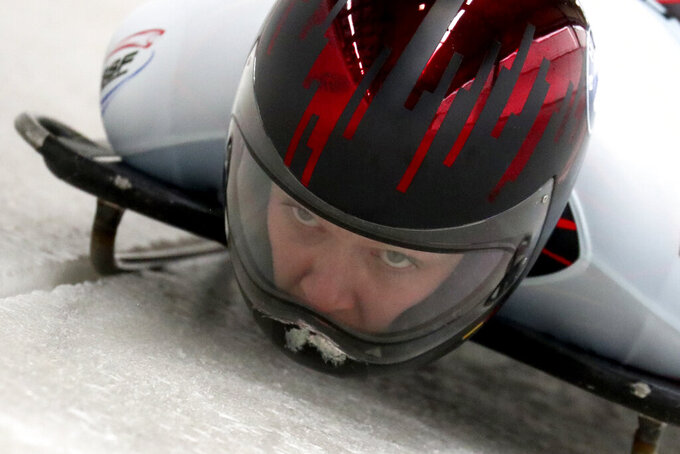 FILE - Kim Meylemans, of Belgium, starts during the women's skeleton race at the Bobsleigh and Skeleton World Championships in Altenberg, Germany, Feb. 11, 2021. Meylemans was permitted to enter one of the Olympic villages early Thursday, Feb. 3, 2022, a move that came hours after she tearfully turned to social media and detailed how upset she was about being in isolation over virus concerns. Meylemans tested positive for COVID-19 upon her arrival at the Beijing Olympics, which meant she had to enter isolation and return several negative tests before being cleared to move into the Yanqing Olympic Village. (AP Photo/Matthias Schrader, File)

BEIJING (AP) — Kim Meylemans thought she was going to the Olympic Village. She wound up in tears instead.

Such was the start of a few confusing hours for the women’s skeleton athlete from Belgium — whose trip into what would have been a second round of isolation underscored the fears many had about the Beijing Olympics and what happens after someone tests positive for COVID-19.

Her tale went like this: A positive test upon her arrival in Beijing led to a three-day stay in isolation, which she thought was ending Wednesday after she returned multiple negative tests. But when the ambulance that she thought was taking her to the village drove past it, panic set in because Meylemans didn’t know what was happening.

A teary social-media post brought immediate attention, and hours later, Meylemans was transported to the village.

“I am now in a wing that’s just isolation, but at least I’m back in the village,” Meylemans said Thursday. “I feel safe and I’ll be able to train a little better here.”

The scenario is one that had many questioning whether coming to the Beijing Games was worth it, with isolation — and for an indefinite period — a very real possibility for anyone testing positive in China, where zero tolerance for the coronavirus is the rule.

Meylemans’ story, at least this chapter of it, has a happy ending. She is where she wants to be and is expected to make the women’s skeleton field on Feb. 12. She has a reasonable chance of contending for a medal if she slides well.

The International Olympic Committee said her brief trip to a second isolation facility was caused by simple logistics, that no room in the village was ready for her. Others, like athlete advocate Rob Koehler, believe her social media post aided her cause.

Meylemans put her confusion on display for the world to see Wednesday, her face and eyes red from crying, her words doing nothing to hide her fear and frustration over the unknown. She will still need twice-daily testing for a week before she can leave the isolation wing in the village.

“Our main goal was to get Kim to the Olympic Village in Yanqing as quickly as possible,” Belgian Olympic delegation leader Olav Spahl said. “We are therefore very pleased that this has now been successfully achieved. We understand that the COVID measures are necessary to safeguard the safety and health of participants in the Games, but we believe that the athlete should always be at the center of such an approach.”

IOC member Juan-Antonio Samaranch, who leads the committee overseeing preparations for the Beijing Games, told other members Thursday that “isolation centers' quality has been dramatically improved” and that more improvements are still needed.

“Relieved to hear that Kim Meylemans is now in the Olympic Village,” IOC spokesman Christian Klaue tweeted. “We are glad that all the efforts led to the successful resolution of this situation.”

Meylemans is considered a “close contact” by the IOC, meaning she can train and compete while living in the Olympic Village but needs to be in a single room, transported by herself and eat alone.

“Since there was no such room directly available, she was temporarily accommodated in a hotel close to the Olympic Village. It is a facility which is dedicated to close contacts in order for them to meet all the criteria to continue to train and compete,” the IOC said.

Humphries can relate to some of what Meylemans is feeling. She tested positive for COVID-19 last month and is staying in a hotel until she gets fully cleared. She can train — her sledmate, Kaysha Love, had to sign a waiver just to be with Humphries for those on-ice sessions — but won’t be allowed in the Olympic Village until next week and will miss Friday’s opening ceremony.

Humphries nearly missed a training session earlier this week because her taxi got stuck in traffic. Another U.S. women’s bobsledder, Elana Meyers Taylor — like Humphries, someone who could be a serious medal contender — remains in isolation after a positive test, though she still has hopes of competing in her two events.

Meylemans finished 14th in her Olympic debut at Pyeongchang in 2018. She has one medal from World Cup races this season, a bronze, and placed no worse than sixth in five of the final six races on the circuit this season.

Official training for women’s skeleton starts next week. At one point Wednesday, Meylemans’ plans to compete seemed in doubt. By early Thursday, the outlook was considerably brighter and Meylemans said she was thankful for the support her teary post generated.

She said she planned to respond to every message, which will take some time.

“Luckily,” she wrote, “I have plenty of time in isolation still.”