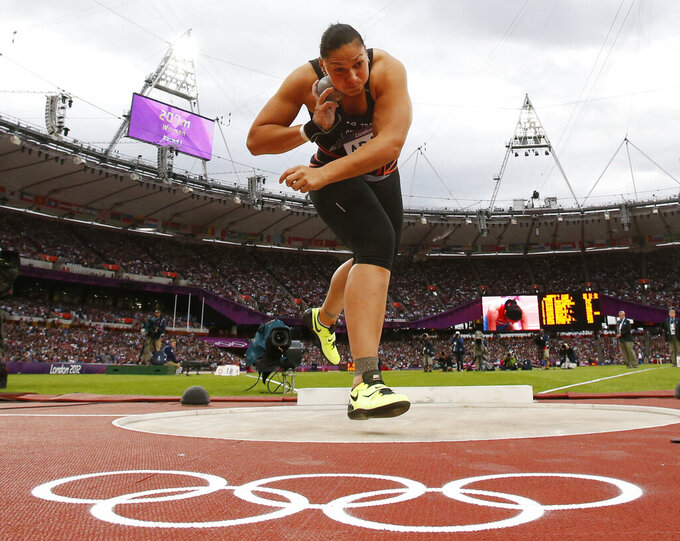 FILE - New Zealand's Valerie Adams takes a throw in the women's shot put final during the athletics in the Olympic Stadium at the 2012 Summer Olympics, London on Aug. 6, 2012. Two-time Olympic women's shot put champion Adams has announced, Tuesday, March 1, 2022, her retirement at the age of 37. (AP Photo/Matt Dunham, File)

One of 18 children of a Tonga-born mother and England-born father, Adams is a sister of the Memphis Grizzlies basketball star Steven Adams. A sister, Lisa Adams, was a shot put gold medalist at the Tokyo Paralympics last year.

She announced her retirement at a news conference on Tuesday.

“I’m here to share with you all that I’m officially hanging up these size 14 throwing shoes,” Adams said. “After winning my bronze medal in Tokyo, I contemplated whether to embark on another campaign.

“I took some time to really process this thought and to see if it was something I actually wanted to do again. My heart, mind and body simply answered the question for me, so it’s time to call it a day.”

Adams won the 2007 championship before winning her first Olympic gold medal at Beijing in 2008. She defended her Olympic title at London in 2012 and placed second at the 2016 Olympics at Rio de Janeiro.

Her personal best throw is 21.24 meters.

New Zealand awarded Adams the female equivalent of a knighthood for services to sport and she is known as Dame Valerie Adams.