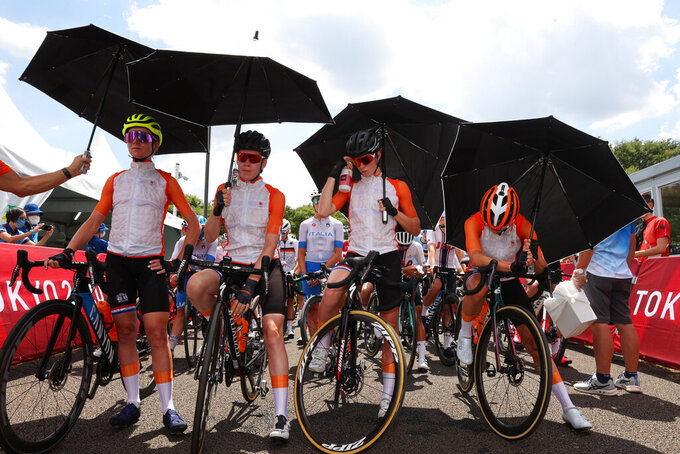 Annemiek van Vleuten, from left, Anna van der Breggen, Demi Vollering and Marianne Vos of the Netherlands protect from the sun with an umbrella before they compete in the women's cycling road race at the 2020 Summer Olympics, Sunday, July 25, 2021, in Oyama, Japan. (Michael Steele/Pool Photo via AP)

IZU, Japan (AP) — Officials at Fuji International Speedway apologized to the Dutch team after world time trial champion Anna van der Breggen was pulled from her bike by security during a recon of the Olympic course for Wednesday's race against the clock.

The guard apparently did not know that van der Breggen was a competing athlete. She wound up falling in the incident — she was not hurt and will still compete — and video showed the Dutch riders surrounding an official's car at the track.

Kyosuke Takei, the coach of Japanese rider Eri Yonamine, said in a tweet: “Everything stopped due to a mistake by the organizer. And in the turmoil with the guards, Anna was threatened and overturned.

In another tweet, Takei wrote: “It was a big mess today time trial test run I was very sad. The organizer has too little respect for the riders. I know everyone is working hard in their own place. It was a terrible mess I haven’t seen these days.”

Tokyo officials have been criticized for their work at several cycling venues.

On Monday, former BMX world champion Niek Kimmann collided at full speed with a race steward who had wandered onto the course during a training run. Both of them went down in a heap and Kimmann, one of the favorites to win a medal when competition takes place later this week, said that he hurt his knee in the impact.

“So this is what happened today,” Kimmann wrote on social media in a post that included video. “Hit an official that wanted to cross the second straight. Hope the official is OK. My knee is sore, but will do my best to be ready for Thursday!"

Organizers have struggled with the cycling program since the moment the Olympics were awarded to Tokyo.

First, there were plans for a temporary velodrome to be built in the Japanese capital, allowing the biggest portion of the cycling program to be held in the heart of the Olympics. But the plan was scrapped in an effort to curb spending. The program that begins next week was moved two hours southwest of Tokyo to an existing track in the remote city of Izu.

That is also where mountain bike racing was contested the past two days and just south of Fuji International Speedway, where the road races and time trials were to be contested. The long distance to all of those facilities from Tokyo has caused headaches for team officials and media, who must use only Olympic-approved transportation during a 14-day soft quarantine but were unaware that there would be extremely limited bus service each day.

As a result, only a couple of reporters from the normally huge contingent of British media that typically follows its powerhouse cycling program were able to cover Tom Pidcock winning his country's first mountain bike gold medal.

In the women's road race, the long-standing policy of Olympic organizers to preclude teams from using race radios caused the Dutch team to be unaware of the situation on the road and potentially cost them a gold medal.

Winner Anna Kiesenhofer of Austria was still ahead of the peloton after an early breakway, but van der Breggen and her teammates thought all the riders had returned to the main group. So when teammate Annemiek van Vleuten, who like van der Breggen will also contest the time trial, broke away and crossed the finish line alone, she thought she had won the race.

“The only information we had was from the car or from a motorcycle, which passed by every 10 minutes or so. I was told that Anna Plichta was up front, so when I caught up with her, I thought we were in the lead,” van der Breggen said. “The worst part about it is that it’s because of the (lack of) information.”