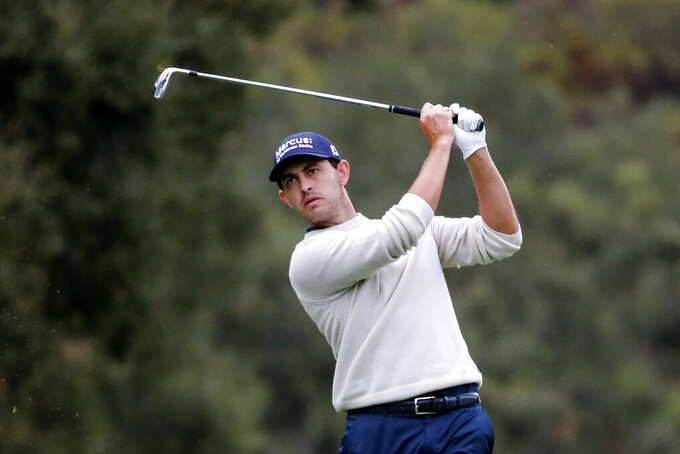 Patrick Cantlay watches his shot from the 18th fairway during the final round of the Zozo Championship golf tournament Sunday, Oct. 25, 2020, in Thousand Oaks, Calif. (AP Photo/Ringo H.W. Chiu)

Notes: The tournament is in its second year and was scheduled opposite the WGC-HSBC Champions in Shanghai, which was canceled. That means the Bermuda Championship offers full FedEx Cup points and a spot in the Masters next year to the winner. ... Five major champions are playing — Padraig Harrington, Henrik Stenson, Jason Dufner, Stewart Cink and Danny Willett. ... The only player from the top 50 in the world is defending champion Brendon Todd. ... Fred Funk and son Taylor are playing for the second straight year. Both missed the cut last year. ... Sponsor exemptions were given to brothers Ollie and Luke Schniederjans. ... Rasmus Hojgaard, the 19-year-old from Denmark, is making his debut at a regular PGA Tour event. Hojgaard is a two-time winner on the European Tour this season. ... Port Royal hosted the PGA Grand Slam of Golf from 2009 through 2014. Harrington won in 2012. Dufner and Cink also played in the Grand Slam at Port Royal.

Notes: Bernhard Langer has won the tournament twice, in 2010 and 2019, and he was runner-up twice in between. ... Jim Furyk is playing in his fifth PGA Tour Champions event and already has won twice. He is No. 9 on the money list with $725,700. That’s more than he made in three of his last four years on the PGA Tour. ... The tournament dates to 2007 when former Ryder Cup captain Mark James won his third and final PGA Tour Champions event. ... Country rap artist Colt Ford is playing on a sponsor exemption, as is Gary Nicklaus. ... Ernie Els, Furyk, Phil Mickelson and Miguel Angel Jimenez have combined to win eight of the 13 tournaments on the pandemic-shortened schedule this season. ... Mark Calcavecchia is in the field after a bout with COVID-19. He won the tournament two years ago.

Notes: This is the first of two consecutive weeks at Aphrodite Hills Resort. Both tournaments were added to the schedule to provide playing opportunities in the wake of other events being canceled. ... The field features four players from the top 100 in the world, including Robert MacIntyre of Scotland and Thomas Detry of Belgium. ... Ross McGowan had gone 11 years since his last European Tour victory when he won the Italian Open. He had not finished among the top 150 on the money list since 2010. ... Before the pandemic, this week would have been the start to the tour's final stretch of Shanghai, Turkey, South Africa and Dubai.