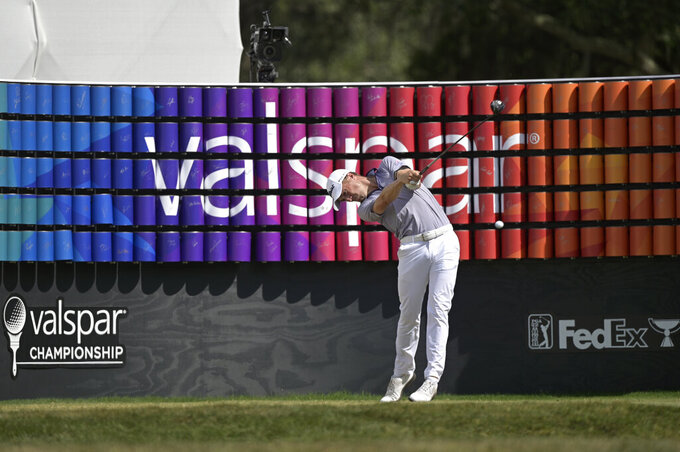 Justin Thomas tees off on the 18th hole during the final round of the Valspar Championship golf tournament, Sunday, May 2, 2021, in Palm Harbor, Fla. (AP Photo/Phelan M. Ebenhack)

Notes: Max Homa had to wait two years for his first PGA Tour title defense because the tournament was canceled last year due to the COVID-19 pandemic. ... The field features 10 of the top 15 in the world, headed by Justin Thomas at No. 2. ... Thomas won the PGA Championship at Quail Hollow in 2017. ... Jordan Spieth is not playing, meaning he has taken off four weeks since the Masters. ... Rory McIlroy slipped to No. 15 in the world, his lowest ranking in 11 years. He was off last week, working on his game at home with English swing coach Pete Cowen. ... This is the final week to finish among the top 70 in PGA points (a special PGA Tour money list) to assure getting into the PGA Championship. ... The tournament will move to the TPC Avenel Farms outside Washington next year because Quail Hollow is hosting the Presidents Cup. ... Phil Mickelson is playing after missing the cut last week at Innisbrook. He has gone 16 consecutive tournaments outside the top 20. He is No. 115 in the world, his lowest ranking since the week of the 1993 PGA Championship won by Paul Azinger.

Notes: This is the first of five majors on the PGA Tour Champions. It was canceled last year because of the pandemic. Steve Stricker won his first senior major at the Regions Tradition two years ago. ... This is the only senior major that does not offer an exemption into a PGA Tour event. ... Mike Weir is coming off his first win on the PGA Tour Champions. ... John Daly is in the field after losing out on a chance to win in Houston last week by hitting into the water on the 18th hole when tied for the lead. ... Bernhard Langer moved back to the top of the Charles Schwab Cup standings last week, overtaking Kevin Sutherland. ... It has been 10 years since five different players won the five senior majors. The winners in 2011 were Tom Lehman, Tom Watson, Olin Brown, Fred Couples and Russ Cochran. ... Langer will try to extend his senior record with a 12th major. ... The tournament previously was held in Arizona and Oregon until moving to Alabama in 2011. ... Jack Nicklaus won this major four times in a span of seven years.

Notes: This is the second and final stop on the first Asia swing of the LPGA Tour. The third event next week in China has been canceled. ... Hyo Joo Kim won last week for her first LPGA title in five years. But she didn't play the LPGA last year while riding out the pandemic in South Korea, and she won twice and earned the money title on the Korean LPGA. ... Kim moved up two spots to No. 7 in the world, giving South Koreans four of the top seven spots in the women's world ranking, including the top three in Jin Young Ko, Inbee Park and Sei Young Kim. ... None of the top three is playing this week. ... ANA Inspiration winner Patty Tavatanakit plays in her home country for the first time since becoming a major champion. She is among 10 Thais in the 72-player field. ... For the second straight week in Asia, Danielle Kang is the only North American from the seven in the top 25 in the world who is playing. ... Jessica Korda and Lexi Thompson are past champions. Korda set the tournament record at 25-under 263 in 2018.

Next tournament: Pure Silk Championship on May 20-23.

Notes: This is the first time Seminole Golf Club is hosting the Walker Cup. It first had a televised event last year when Rory McIlroy, Dustin Johnson, Rickie Fowler and Matthew Wolff played a charity match during the pandemic. ... GB&I has not won on American soil since 2001 at Ocean Forest in St. Simons Island, Georgia. ... Cole Hammer, John Pak and mid-amateur Stewart Hagestad return for their second straight Walker Cup appearance. Alex Fitzpatrick of England is the only returning player for GB&I. ... Nathaniel Crosby is trying to become the first U.S. captain to have back-to-back winning teams since Buddy Marucci in 2007 and 2009.

Notes: This completes three consecutive weeks in the Canary Islands of Spain, and the second straight week on the same course. ... South Africans have won the last two tournaments. ... In 12 tournaments on the European Tour this year, the winners include four South Africans, four Americans, two Englishman and one winner apiece from Japan and France. ... Alejandro Tosti is in the field. He was the runner-up in the inaugural Latin American Amateur Championship. ... Garrick Higgo at No. 66 is the highest-ranked player in the field. ... The European Tour goes to England next week, and except for the U.S. majors, it will stay in Europe until October.